Required Reading on the Payroll Tax Cut — and Much More

Policymakers debating whether to extend and expand the payroll tax cut for working families and pay for it with a modest surtax on people with income above $1 million would be well advised to read a Bloomberg op-ed by Nick Hanauer, a wealthy and extremely successful entrepreneur and venture capitalist. Describing the growing economic insecurity among millions of middle-class families, Hanauer points out the risks that three decades of burgeoning income inequality pose to the economy as a whole:

If the average American family still got the same share of income they earned in 1980, they would have an astounding $13,000 more in their pockets a year.  It’s worth pausing to consider what our economy would be like today if middle-class consumers had that additional income to spend.

Our post on this “great income shift” last year included the table below, which shows how the shift has benefited those at the very top of the income ladder. To be sure, average incomes grew at all income levels from 1979 to 2007, according to data from the Congressional Budget Office.  But, because incomes grew very strongly at the top but only modestly at best for other income groups, the wealthiest Americans now enjoy a much larger share of total income.  If incomes among all groups had grown at the same rate over this period, households in the middle would have $13,000 more in average annual income.  See the graph below:
Image 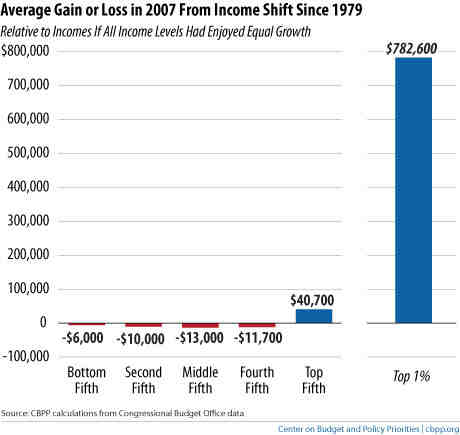 Hanauer then sums up the case for putting a priority on middle-class paychecks:

Consider, for example, that a puny 3 percent surtax on incomes above $1 million would be enough to maintain and expand the current payroll tax cut beyond December, preventing a $1,000 increase on the average worker’s taxes at the worst possible time for the economy.

Finally, he debunks the argument that policymakers’ top priority should be to advance the tax interests of the nation’s wealthiest households:

We’ve had it backward for the last 30 years.  Rich businesspeople like me don’t create jobs. Middle-class consumers do, and when they thrive, U.S. businesses grow and profit.  That’s why taxing the rich to pay for investments that benefit all is a great deal for both the middle class and the rich.

So let’s give a break to the true job creators. Let’s tax the rich like we once did and use that money to spur growth by putting purchasing power back in the hands of the middle class. And let’s remember that capitalists without customers are out of business.

Hanauer’s op-ed contains a number of other points and is a must-read in full.
Topics:
Federal Budget, Federal Tax, Budget Outlook, Business Taxes, Economy
PreviousExploring Income Inequality, Part 4: More on the Widening of Inequality Since the 1970s
NextA Warning on the Likely Impact of Repeating the Corporate Tax Holiday
Stay up to date
Receive the latest news and reports from the Center