Census: SNAP Lifted 4 Million People Out of Poverty in 2012 and Reduced Hardship for Millions More

SNAP (the Supplemental Nutrition Assistance Program, formerly known as food stamps) lifted 4 million people above the official poverty line in 2012, according to new data that the Census Bureau released today.  That’s the highest level on record (see chart).  (Census doesn’t adjust its data for population growth, but we did and confirmed that the share of the population that SNAP lifted out of poverty also stood at a record high.) The official poverty measure does not count SNAP benefits when calculating a family’s income.  But, Census calculates how many people would be lifted out of poverty if it counted SNAP benefits as income.
Image

In addition to keeping some people out of poverty, SNAP also made tens of millions of people less poor in 2012.  For these individuals, the program reduced the gap between their income and the poverty line and made them better able to afford a basic diet. SNAP has helped blunt the harshest impacts of the Great Recession and its aftermath. The number of people receiving SNAP rose as unemployment and poverty increased.  A temporary increase in benefit levels (still in effect in 2012 but ending later this year) gave families additional help to buy groceries at a time when many had seen their incomes plummet and employment opportunities dry up. SNAP is highly effective in reducing the extent and depth of poverty and reducing hunger, but millions of Americans still struggle to afford food.  Data released earlier this month by the U.S. Department of Agriculture showed that 17.6 million American households lacked access to adequate food at some point in 2012 because they didn’t have enough money or other resources to meet their basic food needs. These new data come as the House prepares to consider legislation later this week that would cut SNAP by $39 billion over the next decade.  The bill would deny food assistance to millions of low-income people and reduce assistance for many others.  The cuts would deny or reduce basic food assistance to low-income working families, seniors, jobless adults, children, and even veterans. Some point to SNAP’s recent growth as a justification for the House cuts.  But, as we recently explained, SNAP caseloads and spending are expected to fall in coming years as the economy and labor market improve. The Congressional Budget Office projects that SNAP spending will fall to 1995 levels as a share of gross domestic product (GDP) by 2019 (see chart).
Image 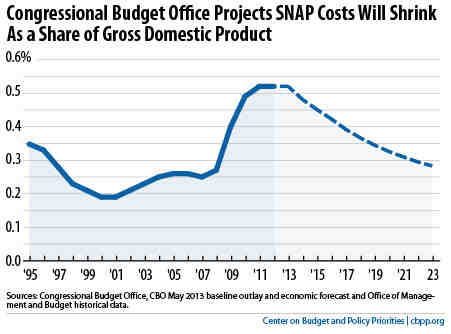