As the House prepares to vote on a budget plan to cut safety net programs — including tax credits for low- and moderate-income working families and food assistance, and almost inevitable cuts in housing assistance — the Census Bureau today released new figures showing that these programs kept millions of people out of poverty in 2016.

The figures use the Supplemental Poverty Measure (SPM), which accounts for taxes and non-cash benefits, so it’s a more complete picture of the impact of anti-poverty programs than the official poverty measure, which counts only cash income. 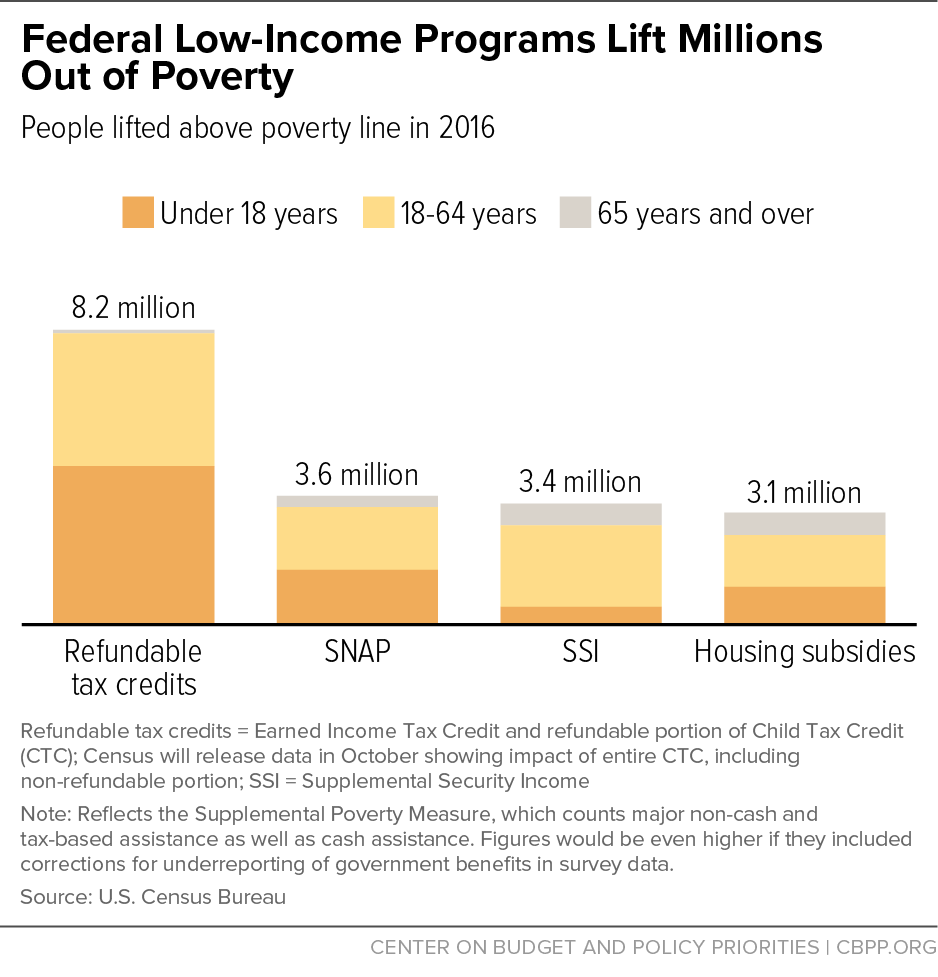 Just as important as lifting people out of poverty, the programs reduce the severity of poverty for tens of millions of additional people by lifting them closer to the poverty line.

The programs’ true impact on poverty is likely even higher. Although the Census SPM findings provide a more complete view of the safety net’s anti-poverty effects than the official poverty figures, they still understate these effects because people in surveys tend to underreport their income from government programs, either because their memories fail them or they’re embarrassed. A CBPP analysis using data from the Department of Health and Human Services and the Urban Institute to correct the Census data for underreporting found that SNAP lifted over 10 million people out of poverty in 2012, compared with 5 million in the uncorrected data in that year. (The tax credit figures are slightly conservative for another reason: they don’t include the non-refundable portion of the CTC, which keeps additional families from being taxed into poverty.)

Some policymakers have used the official poverty measure to argue that federal anti-poverty programs have been ineffective. But using the official measure to compare poverty rates in the 1960s and today is misleading. Non-cash and tax-based benefits were small or nonexistent in the 1960s, but they now constitute a large part of the safety net.  By excluding them, the official poverty measure masks the nation’s progress in reducing poverty over the last five decades.

Building on historical SPM data developed by Columbia University researchers (using a version of the SPM that adjusts the poverty line for inflation, not rising living standards), my colleague Danilo Trisi has estimated that the poverty rate fell from 26 percent in 1967 to 16 percent in 2014. (Calculations using updated data files later posted by the Columbia researchers show a poverty rate of 25 percent for 1967.) The decline was due entirely to the growing poverty-reducing effectiveness of government safety net programs, including non-cash and tax-based assistance. Today’s Census figures provide further evidence of the safety net’s strong anti-poverty impact.