CBO Estimates That Only 1.2 Percent of Americans Will Pay Penalty for Not Getting Health Coverage

As we explained recently, the claim that the Supreme Court’s upholding of the individual mandate in health reform means Americans will face a massive, broad-based tax increase doesn’t square with reality.  Here’s a bit more detail on that issue.

There are two main estimates of how many people would face a penalty for failure to get coverage:  studies by the Urban Institute and by the Congressional Budget Office (CBO).  They examined the issue in slightly 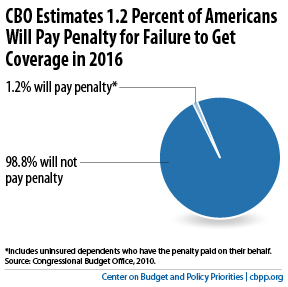 different ways but came to the same conclusion — namely, that the number would be extremely small.

Our earlier post focused on the Urban Institute study, which estimated the number of people who might have to pay the penalty.  The CBO study estimated that about 4 million, or just 1.2 percent of the population, will actually pay the penalty in 2016.  The other 98.8 percent already have coverage, would get coverage under the Affordable Care Act (which would make coverage affordable to many for the first time), would be exempt from the mandate, or would owe the penalty but try to evade it. (You can find the CBO figures on pages 71-73 of this report.)

And, as our previous post explained, the benefits of the individual mandate will be widespread.  To quote the Urban Institute study again:

Individual Mandate Will Benefit All, But Directly Affect Only a Few

March 27, 2012
Previous10 Things You Need to Know About the Capital Gains Tax
NextMedicare Tax Increase to Help Fund Health Care Reform Will Affect Few Taxpayers
Stay up to date
Receive the latest news and reports from the Center