To hear some critics, you’d think the Supreme Court’s upholding of the individual mandate in health reform means Americans will face a massive, broad-based tax increase.  Grover Norquist of Americans for Tax Reform, for example, stated, “it’s now clear that ‘Obamacare’ is all about taxes and it hits everybody, not just rich people.”
Image 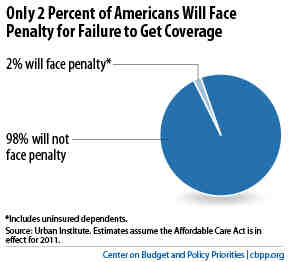 Here’s the reality:  just 2 percent of the population will face a penalty for failing to get health coverage, according to an Urban Institute study.  The other 98 percent either already have coverage, would get coverage under the Affordable Care Act (which would make coverage affordable to many for the first time), or would be exempt from the mandate, the study found. The benefits of the individual mandate, in contrast, would be widespread, as the Urban Institute study explains:

NOTE: For an estimate from the Congressional Budget Office of the number of people who will pay the penalty in 2016, please see CBO Estimates That Only 1.2 Percent of Americans Will Pay Penalty for Not Getting Health Coverage.
Related Posts:
Topics:
Health Reform, Coverage Trends, Health
PreviousGreenstein on the Court’s Health Reform Decision
NextAre State and Local Jobs On the Rebound?
Stay up to date
Receive the latest news and reports from the Center