Both before and after the nonpartisan Congressional Budget Office (CBO) concluded that the House Republican health care bill would cause 23 million people to lose health insurance, the Trump Administration and top Republican lawmakers sought to discredit CBO by attacking its forecasting record on the Affordable Care Act (ACA). “The CBO was wrong when they analyzed Obamacare’s effect on cost and coverage,” Health and Human Services Secretary Tom Price asserted, “and they are wrong again.” Senate Majority Whip John Cornyn tweeted that CBO’s estimates were “fake news.” In reality, however, CBO’s ACA forecasting record looks pretty good: once you adjust for states that didn’t expand Medicaid, uninsured rates fell almost 90 percent as much as CBO predicted.

In March of 2010, CBO predicted that the ACA would reduce the non-elderly uninsured rate from over 18 percent in 2010 to 7.6 percent in 2016. That forecast assumed that all states would adopt the ACA’s Medicaid expansion to cover low-income adults. Two years later, the Supreme Court made the Medicaid expansion a state option, and 19 states haven’t adopted it. If all those states did so, 4 to 5 million more people would gain coverage, according to the Urban Institute. Adjusting CBO’s original 2010 projection by this amount brings its projected uninsured rate for 2016 to 9.4 percent. The actual share of people without coverage in 2016, according to the Centers for Disease Control and Prevention’s National Health Interview Survey, is 10.4 percent (see graph). 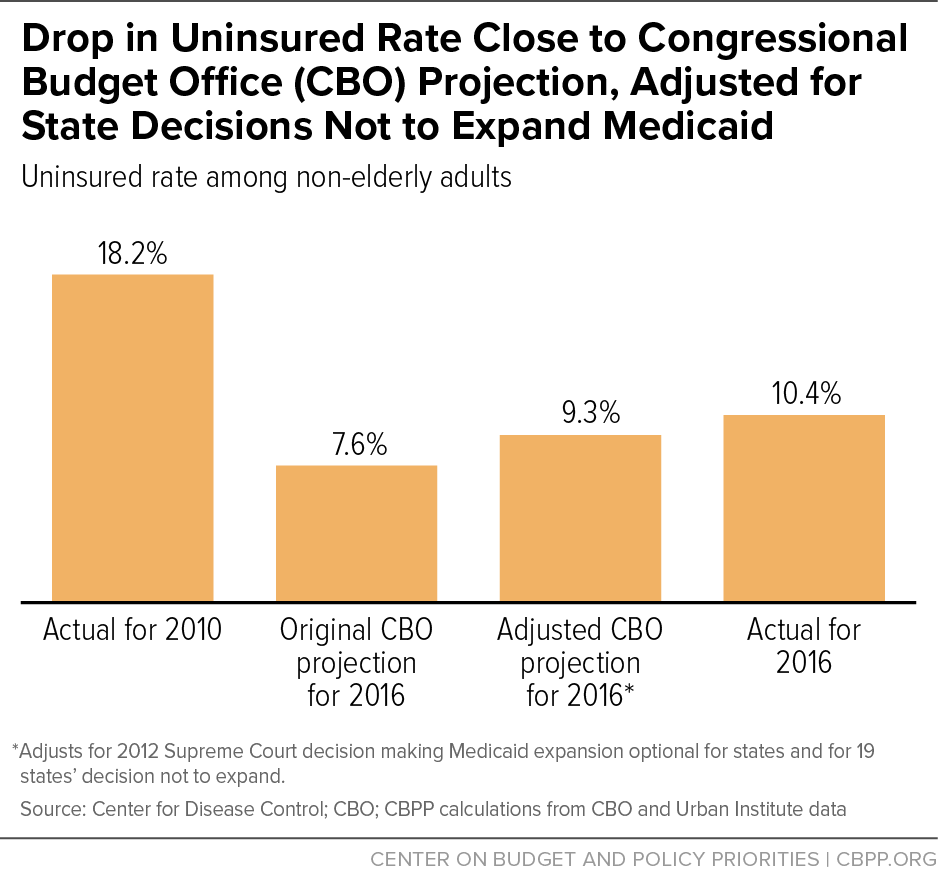 That CBO’s estimates for major legislation to reform the entire health care system weren’t perfect is hardly surprising. But if you trusted CBO’s estimates, you would have expected the ACA to result in a historic increase in health coverage — and that’s exactly what happened.

What’s more, the ACA’s coverage expansions have turned out to cost much less than CBO expected — partly because some states didn’t expand Medicaid, but partly because of “the slowdown in the overall growth of health care costs covered by private insurance and by the Medicare and Medicaid programs,” as CBO’s Director Keith Hall — who was appointed at Price’s recommendation when he was the House Budget Committee chairman — explained. As we’ve written, CBO now estimates federal health spending (with the ACA) between 2011 and 2020 to be lower than projected federal health spending before the ACA’s enactment.

To be sure, CBO’s estimates of marketplace enrollment were further off the mark. But one important factor was that CBO projected several million people would shift to the marketplaces from employer-based coverage as some employers no longer offered coverage, which CBO has since concluded hasn’t happened. Notably, CBO itself emphasized that there was particularly great uncertainty around its estimates of employers dropping coverage. That’s why it wrote a whole report in 2012 on how the coverage impacts and total ACA cost would be about the same whether more or fewer firms dropped coverage, even though marketplace enrollment would be quite different. (CBO also underestimated how many people would remain in non-group coverage outside of the marketplaces, rather than switch to the marketplaces over time.)

Even CBO’s projections of marketplace enrollment were more accurate than those from many other prominent forecasters, according to a systematic Commonwealth Fund study. Meanwhile CBO’s 2010 premium projections were remarkably accurate: within 1 percent of actual average 2017 marketplace premiums.

Shortly before CBO published its first analysis of the House Republican health bill, former CBO Director Doug Holtz-Eakin (now President of the American Action Forum, which supports ACA repeal) commented, “It’s inconceivable that they [Republicans] would want to engage in a war with CBO.” Unfortunately, that prediction has already proved to be wrong — but not because CBO’s prediction record is weak.

May 25, 2017
PreviousIn Case You Missed It…
NextTrump’s TANF Cuts Would Hurt the Poorest Families, and States Might Make Them Worse
Stay up to date
Receive the latest news and reports from the Center