The recent debt-ceiling deal limited the Pentagon’s non-war funding — but not its funding for the wars in Iraq and Afghanistan.  The President has now proposed to cap funding for the wars as well, and he counts $1 trillion in savings over ten years from doing so as part of his $4 trillion in total proposed budget savings.  Some maintain that the $1 trillion in war savings are “phony” or a “gimmick.” We ourselves previously suggested that the savings should be reflected in the budget “baseline” rather than counted as part of the total savings a deficit-reduction plan achieves.  Nevertheless, the President’s proposal itself is sound.
Image 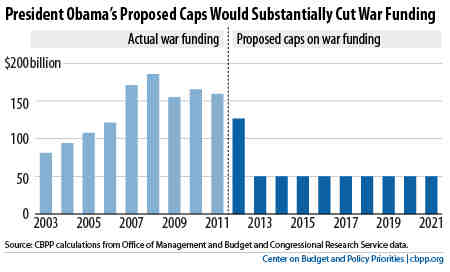 Let’s take a closer look. For starters, it’s worth noting that, in his controversial budget plan last spring, House Budget Committee Chairman Paul Ryan claimed as deficit reduction the very same $1 trillion in war savings and cited an estimate by the Congressional Budget Office (CBO) to back him up.  CBO says that the proposed cap on war costs produces savings of this size, relative to its official budget baseline. To be sure, the plan to substantially reduce war expenditures does not represent a new Obama policy.  That’s why some argue that shrinking war costs should be built into the spending “baseline” instead of counted as savings from the baseline. Rather than debate whether such savings should be built into the baseline, we should keep the following important points about capping war costs in mind: The bottom line is that this is a sound proposal that advances the cause of fiscal responsibility and helps prevent future budget gimmicks that would set us backward.  That is far more important than a fruitless debate over which budget baseline to use and whether to “count” the reduced war expenditures as savings — especially since the President’s plan appears to reach the goal of stabilizing the debt regardless of which baseline one uses and whether one counts these as savings.
Topics:
Federal Budget, Budget Outlook
PreviousThe Case for the Buffett Rule in One Chart
NextCongress Shouldn’t Delay Action on Housing Voucher Reform
Stay up to date
Receive the latest news and reports from the Center