The Case for the Buffett Rule in One Chart

This chart, based on data from the Tax Policy Center (TPC), sums up the case for the President’s proposed “Buffett Rule”: a significant group of very wealthy people pay a smaller share of their incomes in federal income and payroll taxes than large swaths of the middle class. 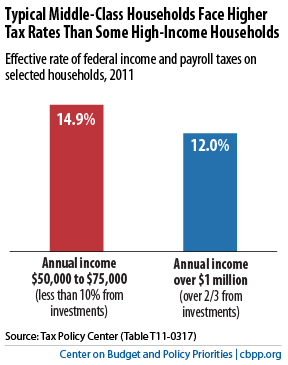 There are three reasons why: 1) a large share of the income of the very wealthy comes in the form of capital gains and dividends, which are taxed at a very low rate; 2) wealthy people pay payroll taxes at a much lower rate than the middle class, and 3) itemized deductions and some other tax expenditures provide much larger tax breaks for high-income people than ordinary households.

The President has called on Congress, as part of comprehensive tax reform, to make sure that no American making more than $1 million a year pays at a lower rate than middle-income families.

On the whole, the federal tax system is modestly progressive, meaning that, on average, high-income

taxpayers tend to pay more of their income in tax than low- and moderate-income households pay. But a significant group of high-income taxpayers — particularly those who derive the bulk of their income from capital investments — may pay taxes at a lower rate than many middle class families as the result of various tax preferences.

The gap in effective tax rates between millionaires and middle-income people is even bigger if you also count state and local taxes, which tend to be regressive.
Policymakers can address this situation in several different ways that would make the tax system fairer and also generate much-needed revenue. Most directly, in conjunction with tax reform, they could tax capital gains and dividends at the same rate as ordinary income. Alternatively, they could enact a surtax on millionaires or a more effective alternative minimum tax on wealthy individuals.This dynamic is at odds with the widely accepted notion that higher-income people should pay a larger share of their income in taxes than middle- and lower-income people do. It’s particularly troubling given the stunning rise in inequality over the past several decades. Incomes have skyrocketed for those at the very top while stagnating for lower- and middle-income families, especially for people without a college degree.