As School Year Begins, Time for States to Invest in Schools

As children across the country begin a new school year, their schools’ facilities and equipment aren’t as modern as they should be, due to sharp cuts in state funding for school capital projects over the past decade. As a share of the economy, state capital funding for schools — for example, to build new schools, renovate and expand facilities, and install more modern technologies — was still down 31 percent in fiscal year 2017 (the latest year for which we have data) compared to 2008, when the Great Recession took hold. That’s the equivalent of a $20 billion cut. (See graph.) 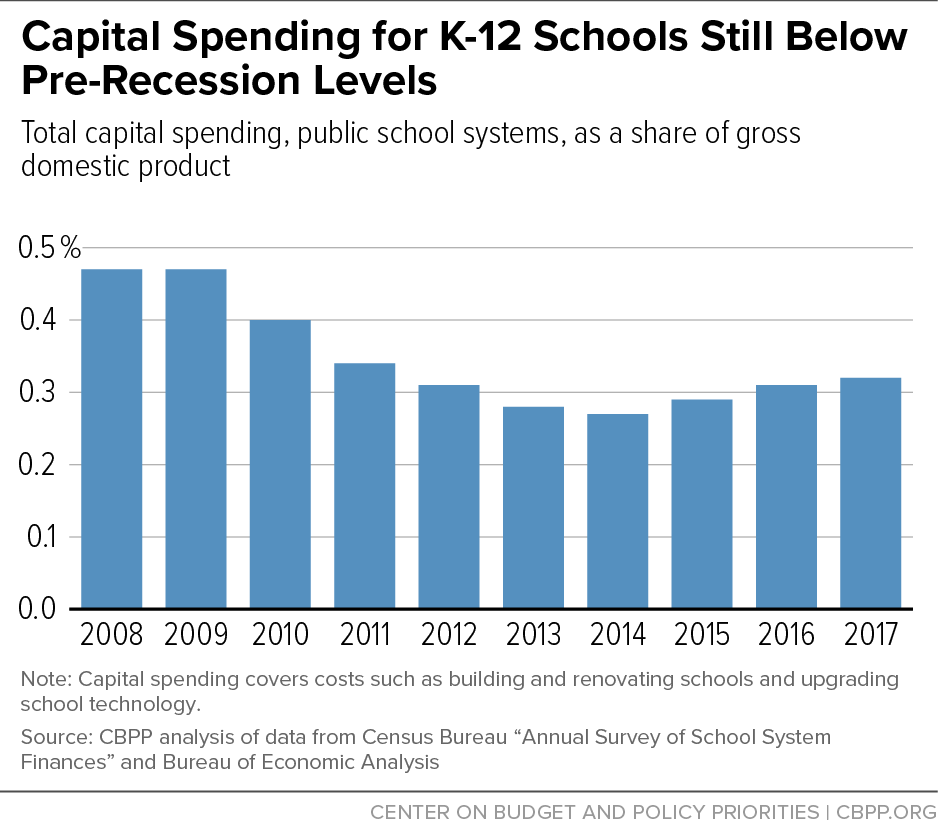 These cuts compound the widespread cuts in general state funding for schools over the same period, which have resulted in lower teacher salaries and older textbooks, among other problems, and have left students with more crowded classrooms often taught by under-qualified teachers who lack the resources needed to succeed.

States overall spend $46 billion a year less than they should building and repairing K-12 schools to provide healthy, safe, modern facilities, according to a 2016 report from the 21st Century School Fund, National Council on School Facilities, and U.S. Green Building Council.

This neglect hurts students’ health and school performance. Research links poor lighting, bad air quality, and noise to lower student achievement. In addition, extreme temperatures resulting from aging heating and cooling systems impede learning and can force school closures that disrupt studies, as Baltimore experienced in the winter of 2018. Already this school year, high temperatures are bringing closures due to lack of air conditioning. A higher percentage of public schools in poor areas, which disproportionately educate children of color, need repair than those in the wealthiest areas.

This disrepair weakens the nation’s long-term prosperity, as we noted in our paper on states’ declining infrastructure investments. Reversing this decline is key to creating good jobs and promoting broadly shared economic growth. States have many tools to finance infrastructure improvements, from borrowing to taxes. It’s time for them to prioritize investment in all aspects of K-12 education.

February 7, 2019
PreviousTANF at 23: Black Children Have a Better Chance to Thrive When States Act to Improve TANF
NextIn Case You Missed It...
Stay up to date
Receive the latest news and reports from the Center