A Graphic Look at a Medicaid Per Capita Cap

Our new explainer shows why converting Medicaid to a per capita cap — a core part of the House and Senate Republican bills to repeal the Affordable Care Act (ACA) — would shift large costs and risks to states, threatening coverage and access to care for the more than 70 million low-income children, seniors, and people with disabilities who rely on Medicaid. 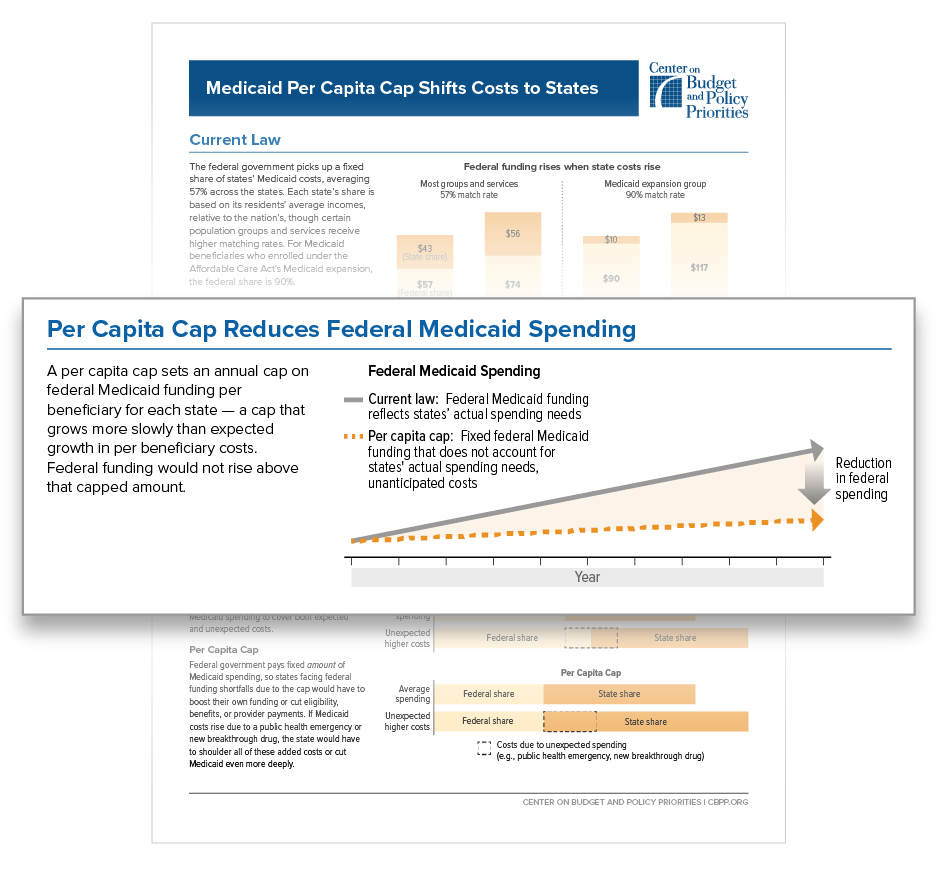 Both bills would end Medicaid’s federal-state financing partnership in which the federal government pays a fixed percentage of state Medicaid costs — on average, 64 percent today. (For beneficiaries enrolled under the Affordable Care Act’s Medicaid expansion, the federal share is 90 percent in 2020 and thereafter, whereas the average federal share for most groups and services is 57 percent.) Instead, beginning in 2020, federal funding would be capped at a set amount per beneficiary. This per capita cap would equal a state’s past federal Medicaid spending per beneficiary, rising each year by a slower rate than expected growth in per beneficiary spending. That would cut federal funding, relative to current law, by growing amounts each year.

States facing federal funding shortfalls due to the cap would have to raise taxes, cut other parts of their budgets like education, or — as is far likelier — cut Medicaid eligibility, benefits, or provider payments, jeopardizing coverage and access to needed care.

A per capita cap would also shift financial risk to states for unanticipated costs, such as faster-than-expected cost growth across the health care system or unexpected increases in Medicaid per-beneficiary costs due to a public health emergency or a new breakthrough drug. And a per capita cap wouldn’t account for the certain increase in seniors’ per beneficiary costs as more seniors move from “young-old age” to “old-old age” (85 or older) and their health care needs rise. Because states would have to finance 100 percent of all costs above the cap, these added costs would put further significant pressure on state budgets, leading to even bigger Medicaid cuts over time.

Senate Includes Even Deeper Medicaid Cuts Under Per Capita Cap

Senate Health Care Bill Ends Medicaid as We Know It, With Even Bigger Cuts Than House Bill

Medicaid Per Capita Cap Would Disproportionately Harm Some States

June 22, 2017
PreviousSenate Health Bill Pays Lip Service to Home- and Community-Based Services, But Imposes Deep Cuts
NextIn Case You Missed It…
Stay up to date
Receive the latest news and reports from the Center