| By Aviva Aron-Dine and Robert Greenstein

The President’s budget estimates that extending the 2001 and 2003 tax cuts would cost $1.7 trillion over the next decade (2008-2017).  (A figure of $1.6 trillion has been cited by a number of media outlets, but this number leaves out the increased outlays that will result from extending the refundable tax credit expansions enacted in 2001; the Administration’s estimate of the full costs of extending its tax cuts, including the tax credit expansions, is $1.7 trillion.)

The Administration’s figure, however, is deceptive.  The Administration’s budget reflects the cost of only one year of relief (2007) from the Alternative Minimum Tax.  In estimating the cost of extending the President’s tax cuts, the budget assumes that AMT relief then will end and that the AMT will mushroom after that and cancel out, for tens of millions of taxpayers, part of the very tax cuts the President proposes to extend, thereby lowering the tax cuts’ cost.

According to the Congressional Research Service, “absent congressional action, the AMT will ‘take back’ most of the tax relief granted through the regular income tax.”  CRS calls attention to Congressional Budget Office estimates that show that “the total cost (both direct and indirect [i.e. including interest costs]) of extending the EGTRRA/JGTRRA tax cuts and reforming the AMT will be $3.5 trillion over the FY2008 through 2017 period.”[1]

An estimate that excludes the cost of continued AMT relief, as the Administration’s $1.7 trillion figure does, can not convey the true cost of the President’s tax policies for two basic reasons.

For these reasons, assuming that AMT relief expires yields an estimate of the President’s proposed policy that is artificially low, as it excludes the cost of the one-fourth of the tax cuts that would be cancelled out by the AMT.  To avoid underestimating the cost of making the President’s tax cuts permanent, it is necessary to include the cost of AMT relief. 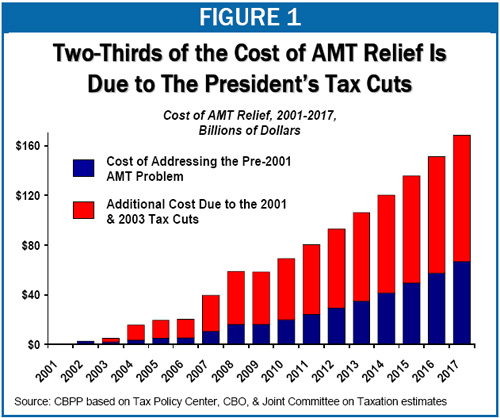 As noted, CBO estimates that making the 2001 and 2003 tax cuts and AMT relief permanent would cost $3.5 trillion through 2017, including added interest costs.  The Tax Policy Center estimates suggest that only about $400 billion of that cost represents the cost of addressing the preexisting AMT problem.  The rest represents the direct costs of the 2001 and 2003 tax cuts plus the additional cost of AMT relief that is entirely a result of those tax cuts.