Why Isn't Poverty Falling? Weakening of Unemployment Insurance Is a Pivotal Factor

The poverty rate remained unchanged at a high 15.0 percent in 2012, the third full year of an economic recovery that officially began in June 2009. One key reason why poverty has remained virtually frozen despite continued economic growth is the weakening of unemployment insurance (UI).  If UI had not become less effective at reducing poverty among unemployed workers between 2010 and 2012, the poverty rate would have fallen over that period to 14.7 percent, CBPP calculations show.  UI will become still less effective if Congress fails to extend emergency benefits for the long-term unemployed, which expire at the end of December. 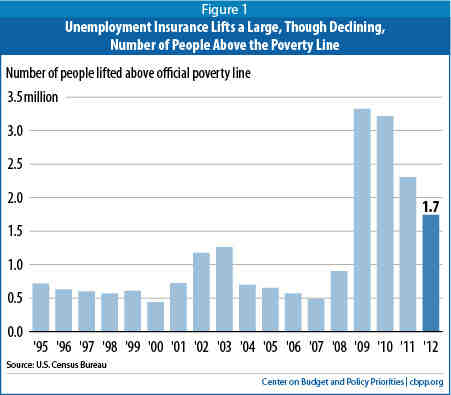 To be sure, the decline partly reflects a positive development:  fewer workers are unemployed, so fewer are eligible for UI benefits.  But that explains only a small part of the decline.  The number of unemployed workers fell by 16 percent from 2010 to 2012 (and some of that decline represents jobless workers who stopped looking for work, rather than those who got jobs).  The number of people whom UI protected from poverty fell by nearly three times as much:  46 percent.

The chief reason for the decline is the dwindling likelihood that an unemployed worker will receive UI.  The number of UI recipients for every 100 unemployed workers fell from 67 in 2010 to 57 in 2011 and 48 in 2012.

This too-quick retreat on UI benefits is pushing upward on poverty, as the following calculations show:

The share of unemployed workers getting UI fell for several reasons.  First, the length and depth of the jobs slump has left many workers unable to find work before their UI benefits run out.  Second, several states have cut the number of weeks of regular, state-funded UI benefits.

A third and critical reason is that in 2012, Congress provided fewer weeks of federal UI benefits, which go to long-term unemployed workers.  It cut the number of weeks of federal UI benefits provided through one UI program (Emergency Unemployment Compensation or EUC) and chose not to take steps it had taken in the past to continue access to another federal UI program (Extended Benefits), which as a result is essentially no longer available.

What’s left of federal UI (the EUC program) is scheduled to expire at the end of December.  If Congress does not extend it, all long-term unemployed workers receiving EUC will be cut off at that point, and other workers who qualify for UI will be limited to whatever their state’s regular UI program provides — 26 weeks in most states.