What the 2007 Trustees' Report Shows about Social Security

| By Robert Greenstein and Chad Stone

On April 23, the Social Security Board of Trustees released the 67th annual report on the program’s financial and actuarial status.  The report projects that Social Security’s trust fund reserves will be exhausted in 2041, one year later than in last year’s projection.  In 2041, Social Security will be able to pay 75 percent of scheduled benefits, rather than full benefits.

This CBPP analysis highlights several points about the trustees’ report: 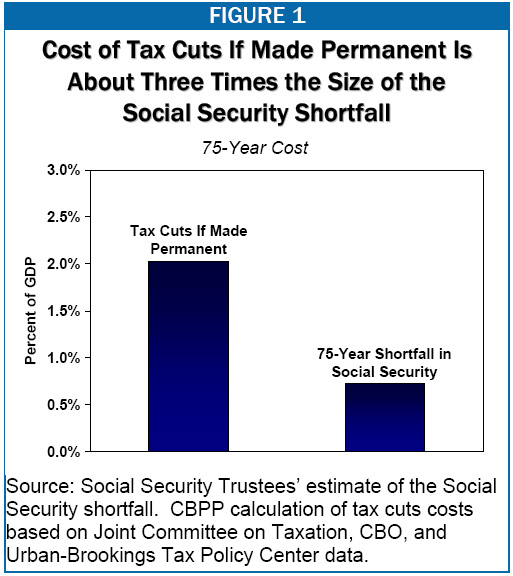 An Overview of the Projections in the New Trustees’ Report

The infinite horizon measure, which was first included in the 2003 report, has been strongly criticized as a highly speculative and misleading measure by the American Academy of Actuaries and other Social Security analysts.  Changes in the dollar value of the infinite horizon deficit are particularly misleading because they can be large (as they were a year ago) even when there is no meaningful change in the real financial condition of the program.[4]  In addition, nearly two-thirds of the infinite horizon deficit would be incurred after 2081, making it very sensitive to small changes in assumptions and consequently of very limited reliability for policymakers.

How the Projections Compare with Those Made In Previous Years

In general, the key dates and the overall financial picture in the 2007 trustees’ report represent improvement over the trustees’ 1997-2001 reports and little change from the 2002-2006 reports (see Table 1).  The long-term deficit in Social Security declined from2.23 percent of taxable payroll in the 1997 report to 1.89 percent in the 2000 report and has drifted up slightly since then.  The date by which the trust fund is projected to be exhausted has moved farther into the future — from 2029, as forecast in 1997, to 2041 as projected in the current report.  In other words, Social Security has a long-run financing shortfall that must be addressed, but the magnitude of the challenge has not been getting appreciably worse.

The principal reason that Social Security’s underlying financial outlook changes over time is that the trustees revise their assumptions about future economic and demographic variables and their projection methodologies.  Those changes interact with the purely technical fact that the mere passage of time has the effect of worsening some measures of the program’s financial condition.

In this year’s report, the reduction in the Social Security shortfall due to changes in methods and assumptions was large enough to more than offset the increase in the shortfall due to the passage of time.  As a result, the key indicators in 2007 continue to look roughly as they did in 2002-2006.  That the outlook for Social Security has been relatively stable does not negate the fact that the program faces large deficits down the road, reflecting, among other things, the retirement of the baby boom generation.  But it does mean that the magnitude of the challenge we face to put the program on a sound long-term basis is not becoming unmanageable.  That is especially evident when looking at measures that express the long-term shortfall as a percentage of GDP or taxable payroll (that is, relative to the resources available to meet the challenge), rather than simply in dollar terms.

Over the next 75 years, the Social Security shortfall amounts to 0.7 percent of GDP, a relatively modest share of the total federal budget shortfall projected for this period.  Recently enacted policies, particularly the tax cuts (if made permanent) and the prescription drug benefit, will have a larger impact on the long-term fiscal deficit.

Putting the trustees’ report in a broader fiscal context suggests that the sources of the future large imbalances in the federal budget as a whole need to be addressed.  The sources of these imbalances include not only Medicare and Social Security, but revenues as well.  If the 2001 and 2003 tax cuts are made permanent, they will contribute far more to budget deficits than Social Security will.

In 1983, Congress and President Reagan acted on recommendations made by the Greenspan Commission and strengthened Social Security’s financial status through a combination of benefit and revenue measures.  Various combinations of modest benefit reductions and revenue increases have been proposed by economists Peter Diamond and Peter Orszag, economists Henry Aaron and Robert Reischauer, former Social Security Commissioner Robert Ball, and the AARP.  Such steps could restore Social Security solvency while beginning to reduce federal budget deficits and debt.

[1] Technically, Social Security has two distinct trust funds:  one for old-age and survivors benefits and one for disability benefits.  This report follows the standard convention in referring to the combined balance as “the Social Security trust fund.”

[2] Net present value is the equivalent amount that today, with interest, would exactly cover the future shortfall.

[3] Note that, per the trustees’ convention, the shortfall as a share of taxable payroll includes the cost of a “target fund” — that is, a trust fund balance at the end of 2081 that would be sufficient to pay full benefits in 2082 even in the absence of any trust fund income.

[4]  Illustrating the potentially misleading nature of dollar estimates, the infinite horizon estimate (and the 75-year estimate for that matter) is smaller as a percent of GDP and as a percent of taxable payroll this year than last year, yet the dollar estimate is larger.  See Richard Kogan, Robert Greenstein, and Jason Furman, “Will the Administration Claim the Cost of Fixing Social Security Rose $700 Billion Because Congress Did Not Act Last Year?”  Center on Budget and Policy Priorities, April 28, 2006.

[5] In moving from 2006 to 2007, every future year’s balance is discounted by one less year, which increases the size of that year’s balance in the present-value calculation.