Over the past three years, school districts and the state agencies that run the Supplemental Nutrition Assistance Program (SNAP, formerly the Food Stamp Program) have been implementing a federal requirement designed to provide food assistance to needy children who are eligible for it and eliminate unnecessary paperwork for families and schools.  Under the requirement, known as “direct certification,” states and school districts now work together to ensure that the 9 million school-age children in households receiving SNAP benefits are automatically enrolled for free school meals. [1]  School districts rely on detailed information on households’ income collected by the SNAP agency so families can bypass the standard school meals application process.  Children in households receiving SNAP benefits were already eligible for free meals; the new requirement ensures that they are enrolled for free meals.

The U.S. Department of Agriculture (USDA) recently released a study of states’ direct certification performance.[2]  Although USDA’s figures are estimates and states may wish to develop their own more refined measures, USDA’s analysis provides a useful baseline against which states can measure progress and offers information about choices states can make to improve the reach of direct certification.  This paper explains three key findings that emerge from the study:

In Some States, Many Eligible Children Miss Out on Direct Certification

Congress imposed the direct certification requirement because direct certification has considerable benefits over the paper application process.[3]  It is extremely accurate.  It targets a highly needy group of children, all of whom are already eligible for free school meals.  It allows families receiving SNAP benefits to avoid a second, duplicative application process and reaches children even if their parents would not have applied for free meals.[4]  It also reduces paperwork for school districts by lowering the number of applications they must process and verify.

USDA’s recent study includes state-by-state estimates of the share of children eligible for direct certification in school year 2007-2008 (based on receipt of SNAP benefits) who actually were directly certified.  These estimates show that states vary widely in their performance.  While five states (Alaska, Delaware, New York, Rhode Island, and Tennessee) directly certified more than 90 percent of eligible children, 16 other states directly certified 60 percent or fewer of eligible children, meaning that at least two in five children who could have benefited from direct certification missed out.  Appendix A, taken from the USDA report, provides the results for each state.

USDA examined state performance with regard to the broader universe of children who could be directly certified for free school meals.  In addition to the SNAP recipients discussed above, this larger group includes children whom school districts have the option of directly certifying based on their family’s receipt of Temporary Assistance for Needy Families (TANF) cash assistance or Food Distribution Program on Indian Reservation (FDPIR) benefits.  USDA estimated the portion of these children who were directly certified and the portion who were certified based on a paper application.  It found that while the paper application process picked up substantial numbers of children whom direct certification did not reach, many eligible low-income children missed out on free meals altogether.

Appendix B, taken from USDA’s report, estimates the portion of children eligible for direct certification who were actually enrolled for free school meals, through either direct certification or a paper application.  It shows that in 12 states — Colorado, Hawaii, Idaho, Illinois, Massachusetts, Missouri, Montana, New Hampshire, New Jersey, North Dakota, Oregon, and Wyoming — and the District of Columbia, more than 25 percent of children who could have been directly certified for free school meals did not receive those meals.

These findings suggest that paper applications do not fully compensate for a weak direct certification system — and that very poor children who qualify for free meals are more likely to receive those meals if they are directly certified.

There are, however, states whose direct certification systems are not working well.  USDA will now assess states’ performance in this area each year, and program administrators and anti-hunger advocates may wish to use these reports to guide their efforts to evaluate how to reach eligible children most effectively and how to strengthen their direct certification procedures over time.

Federal policymakers can also strengthen direct certification when Congress reauthorizes the school meals programs later this year.  One simple way to enable more poor children to benefit from automatic enrollment would be to expand the list of programs that school districts may use as a basis for direct certification.  For example, Congress could allow states to use family income information from the Medicaid program to determine eligibility for school meals.  In addition, Congress could consider incentives to states that conduct exceptionally effective direct certification or show significant improvement.

Appendix A:
Percentage Of Children Eligible For Direct Certification Based On Receipt Of SNAP Benefits Who Are Directly Certified
(2007-2008 School Year)
Image 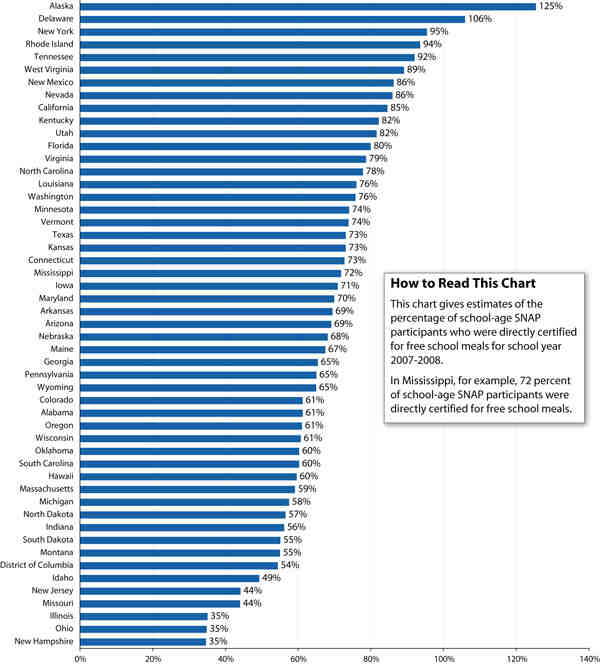 [1] Direct certification had been optional for more than a decade for children in households receiving SNAP benefits.  On an optional basis, children may also be directly certified based on receipt of cash assistance under the Temporary Assistance for Needy Families (TANF) block grant, or benefits under the Food Distribution Program on Indian Reservations (FDPIR).  Homeless, runaway, and migrant children may also be directly certified using different procedures.  But the vast majority of children eligible for direct certification are eligible because of SNAP benefits receipt.

[3] These benefits, as well as the operational details of how direct certification works, are discussed in detail in “Implementing Direct Certification — States and School Districts Can Help Low-Income Children Get the Free School Meals for Which They Are Eligible,” Center on Budget and Policy Priorities, August 2006.

[4] Under federal regulations, families must be notified that their children have been directly certified and must be given the option to decline the direct certification.  See 7 C.F.R. § 245.6(c)(1).

[5] In the 2004-2005 school year, considering only districts that were conducting direct certification, approximately one in three children (30 percent) who could have benefited from direct certification missed out even though there was a direct certification process in place.  See “Data Matching in the National School Lunch Program:  2005,” prepared by Abt Associates Inc. under a research contract with the Food and Nutrition Service, USDA, December 2006, http://www.fns.usda.gov/oane/MENU/Published/CNP/CNP.HTM.

[6] For more detailed discussions of specific steps states and districts can take to reach more children eligible for direct certification, see “Data Matching in the National School Lunch Program — Approaches to Direct Certification and Direct Verification:  Guide for State and Local Agencies,” prepared by Abt Associates Inc. under a research contract with the Food and Nutrition Service, USDA, March 2007, http://www.fns.usda.gov/ora/MENU/Published/CNP/FILES/DataMatchingGuide.pdf and “Implementing Direct Certification — States and School Districts Can Help Low-Income Children Get the Free School Meals for Which They Are Eligible,” Center on Budget and Policy Priorities, August 2006.

[7] A nationwide study found that 71 percent of eligible children were directly certified in districts using data matching systems, while only 55 percent of eligible children were directly certified in districts with letter systems only.  See “Data Matching in the National School Lunch Program: 2005,” prepared by Abt Associates Inc. under a research contract with the Food and Nutrition Service, USDA, December 2006, http://www.fns.usda.gov/oane/MENU/Published/CNP/CNP.HTM.  Similarly, when the state of Illinois switched from a data matching system to a letter system, a rigorous evaluation found that fewer than half of the letters the state mailed out were returned. (The evaluation excludes Chicago, for which data were not available.)  See Phase I Evaluation Report:  The New Direct Certification Process for Approving Eligible Students for Free School Meal Benefits in the State of Illinois, Beverly S. Bunch, Ernest L. Cowles, and Richard Schuldt, University of Illinois at Springfield, December 2003.