Understanding Next Week’s Census Figures on Poverty and Inequality

On September 16, the Census Bureau will release official statistics on poverty and inequality in 2013.  Several points are worth noting in advance of the release.

As in Other Recent Recoveries, Poverty Has Been Slow to Improve

Over time, poverty rates tend to move roughly in tandem with economic indicators, which generally improved slightly in 2013.  The economy added 2 million jobs, the share of non-elderly adults with jobs edged up, and an index of total hours worked by all workers increased.[1]  Thus, the poverty rate—which jumped from 12.5 percent in 2007 to 15.1 percent in 2010 and remained essentially unchanged at 15.0 percent in 2011 and 2012 — may start to improve in 2013 as well, although the improvement might not be statistically significant.[2]

A return to pre-recession poverty levels is unlikely soon.  The labor market — as measured by the percentage of non-elderly adults who are employed — declined substantially in recent years, falling into a hole from which it had only begun to climb out in 2013.  To replace the millions of jobs lost in the Great Recession anytime soon while keeping up with population growth, the economy must create jobs faster than it has to date.  Although the present economic recovery (which officially began in June 2009) is not uniquely disappointing in this regard — the previous recovery, which began in 2001, was even slower in terms of job creation and poverty reduction at a comparable stage — it is still problematic, and because the economic downturn was so deep, there is much more ground to make up.  Recoveries in the 1960s, 1970s, and 1980s featured quicker reductions in poverty, with the first reductions occurring in the first full year or two after the recessions ended.  (See Figure 1.) 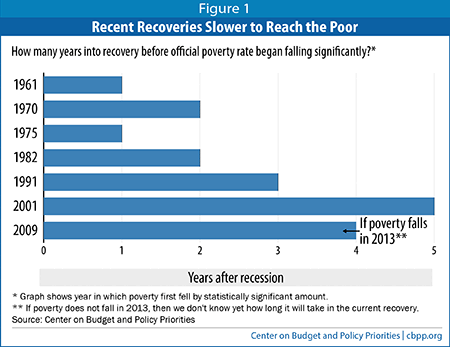 The economy almost certainly would have improved more in 2013 had austerity policies not reduced the government’s net contribution to the economy.  These included the “sequestration” spending cuts enacted in the Budget Control Act of 2011 and first implemented in 2013 and the expiration of the payroll tax holiday, which reduced most workers’ take-home pay by 2 percent of earnings.  The federal spending and tax policies that were in effect in 2013 (relative to the policies in effect in 2012) restrained economic growth by about 1.1 percent of gross domestic product (GDP), according to Goldman Sachs, and were projected by the Congressional Budget Office to cost the economy more than 1 million jobs.[3]

One element of the fiscal contraction that kept poverty elevated in 2013 was the continued decline in unemployment insurance (UI) benefits, which fell by $23 billion (27 percent), adjusted for inflation.  The decline partly reflected a positive development — falling unemployment — but also stemmed from reductions in UI, including a reduction in weekly benefit levels required by sequestration and a shrinkage of the number of weeks for which long-term unemployed workers could receive UI benefits.

The decline in UI benefits pushed poverty upward in two ways:  by keeping fewer UI beneficiaries and their families above the poverty line and by weakening the overall level of consumer spending (and hence employment).

Between 2009 and 2013, inflation-adjusted hourly wages rose by 1 percent for workers at the 95th percentile (workers whose wage levels exceed those of 95 percent of all workers but are less than the remaining 5 percent), but fell by about 4 to 6 percent for workers in the bottom 60 percent of the wage scale, according to the Economic Policy Institute.[4]  These wage losses help to explain the record income gap between rich and poor in 2012 (discussed below) and the failure of overall economic growth to lower the poverty rate significantly in 2011 and 2012 as unemployment began to subside.

These findings are consistent with a recent Federal Reserve study that finds evidence of growing income concentration between 2010 and 2013.  “Only families at the very top of the income distribution saw widespread income gains between 2010 and 2013,” it found, as incomes grew for the nation as a whole but fell for middle- and lower-income households.[5]  (The study is based on a Federal Reserve survey that includes important income sources that the Census data omit such as capital gains income — which is a major source of income for very-high-income households — as well as income that low-income households receive from SNAP, formerly food stamps.)

Income Inequality at Record-High Level in 2012

The income gap between rich and poor as measured by the Gini index — the Census Bureau’s main summary indicator of inequality in pre-tax cash income — tied a record in 2012, with the data going back to 1967.  Other inequality measures (such as the percentages of national income that go to the bottom fifth, the middle three-fifths, and the top 5 percent of households) also stood at or near record levels in 2012.  Tuesday’s Census release will show whether inequality under these measures was at record levels in 2013.

These inequality measures, like most of the income and poverty data that Census will release on Tuesday, will have important limitations.  As noted, these data will not include capital gains income.  The Census figures also will miss substantial income that very high-income people receive because Census doesn’t collect data on salaries above $1,099,999; an individual whose salary rises from $20 million to $25 million between 2012 and 2013 (or whose income falls from $25 million to $20 million) is recorded as earning $1.1 million in both years.  As also noted, the Census data won’t include some forms of income that low-income households receive such as SNAP, rental subsidies, and the Earned Income Tax Credit (EITC).  The Census figures thus will provide an incomplete look at pre-tax income inequality.  They should be considered in combination with other available data such as the Federal Reserve study described above.

The Census figures will focus on the official poverty statistics, which are based on pre-tax cash income and, to repeat, omit support such as food assistance and rental subsidies as well as tax-based assistance such as the EITC.

An alternative Census Bureau poverty measure, the Supplemental Poverty Measure (SPM), includes these types of government assistance, and experts generally consider it a more reliable tool for measuring changes in poverty over time as well as the safety net’s impact on poverty.  Unfortunately, Census will not release SPM figures for 2013 until later this year.

The SPM data that Census has released for prior years show that the programs it counts (but the official poverty measure doesn’t) had strong effects in moderating the increase in poverty that the recession caused.  Under a version of the SPM known as the “anchored SPM,” the poverty rate rose 1.3 percentage points from 2007 to 2012 — half as much as under the official poverty measure — providing strong evidence of the programs’ impact.  In addition, an analysis by researchers at Columbia University that examined the anchored SPM back to 1967 found a large reduction in poverty between the late 1960s and the present when assistance from programs like the EITC and SNAP is taken into account.  Support from safety net programs that is not counted under the official poverty measure now makes up the majority of government income assistance for low-income non-elderly households.

Although the Census Bureau will not release SPM data on Tuesday, it will release a table providing data on the poverty-reducing effects of certain programs, including SNAP.  These figures will show how many Americans in different age groups arelifted above the poverty line when the official poverty measure is adjusted to count these benefits as income.  (These figures will not be directly comparable with the SPM estimates of the programs’ poverty reduction effects.[6])  Data that Census released last year[7] showed SNAP lifted 4.0 million people out of poverty in 2012 when it is included.

The data will also show what poverty rates would be if UI or Social Security were not included in the official measure.  For example, last year’s figures showed that, if UI weren’t included, the poverty rate would have fallen by 0.7 percentage points from 2010 to 2012; instead, poverty remained essentially flat, illustrating the weakening antipoverty role of UI.

[2] Note that this year’s findings will be based on a smaller survey sample than usual, which means that the change in the poverty rate required to achieve statistical significance will be slightly larger this year.  That, in turn, makes the likelihood of Census reporting no significant change slightly greater than it usually is.  The sample size change is a one-time side effect of efforts to improve the Census questionnaire.

[4] Elise Gould, “Why America’s Workers Need Faster Wage Growth — And What We Can Do About It,” Economic Policy Institute, August 27, 2014, http://www.epi.org/publication/why-americas-workers-need-faster-wage-growth, and CBPP calculations.

[5] Jesse Bricker et al., “Changes in U.S. Family Finances from 2010 to 2013: Evidence from the Survey of Consumer Finances,” Federal Reserve Board, September 2014, http://www.federalreserve.gov/pubs/bulletin/2014/pdf/scf14.pdf.  The Federal Reserve study, like the Census data, looks at income before taxes.

[6] These figures will not match SPM estimates of the programs’ antipoverty effects because the latter capture the interaction effects of multiple non-cash programs and because the SPM deducts taxes and out-of-pocket work and medical expenditures from income and uses a somewhat different poverty-line threshold.