Instead of Compromising, Proposal Tries to Have It Both Ways

On June 22, the House of Representatives passed estate-tax legislation (H.R. 5638), introduced by House Ways and Means Chairman Bill Thomas, that is very similar to — and even slightly more costly than — the most recent estate-tax proposal floated by Senator Jon Kyl.  Both proposals would cost nearly as much as permanent repeal of the estate tax, and, relative to other reforms, such as making 2009 estate tax law permanent, both would spend billions more on tax breaks for the largest estates.  The Senate is expected to vote on the measure before adjourning for the July 4th recess.  Senate Majority Leader Bill Frist has encouraged this process in hopes of achieving the needed 60 votes in the Senate to drastically reduce the estate tax.  (This follows the Senate’s rejection on June 8 of a motion to consider legislation that would repeal the estate tax permanently.)

In linking the estate tax rate to the capital gains rate, Chairman Thomas has embraced a gimmick that allows his proposal to be presented differently to groups on different sides of the estate tax debate:  it can be described as having rates of 15 percent and 30 percent, or, to make it appear more attractive to those concerned about cost, it can be presented as having rates of 20 percent and 40 percent.  In reality, of course, the current 15 percent capital gains rate either will be extended after 2010 or it will not be:  the Thomas proposal cannot simultaneously have a top estate tax rate of both 30 percent and 40 percent.  Yet the proposal is designed with the hope of having it both ways politically.

Whether or not the capital gains rate increases to 20 percent, the Thomas proposal does not represent a true compromise: 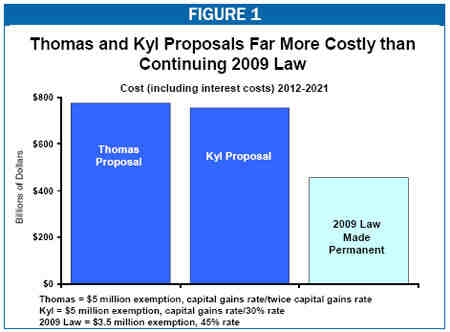 Reform Proposals Should Be Evaluated Based On Their Long-Term Costs

The costs of estate tax “reform” proposals are typically evaluated by comparing them to the cost of full repeal.  There is some dispute, however, over how best to measure these costs.  The Joint Committee on Taxation’s official estimates of the cost of repeal and various reform options cover the ten-year period from fiscal year 2007 through 2016.  This means that the estimates reflect only five years of the cost of extending repeal, because that change would not take effect until 2011.  Moreover, the cost of repeal is not fully reflected in the cost estimates until 2012, due to the one-year delay after an individual’s death that typically occurs before the tax is paid.  The official cost estimates thus provide only a partial picture of repeal’s ten-year cost and of the cost of various reform options.

As a result, it is preferable to examine the first ten years in which the costs of repeal are fully reflected in the cost estimates — 2012-2021.  This can be done by taking the Joint Committee on Taxation’s estimate of the costs of an estate tax proposal for the years from 2012 through 2016.  For the years after 2016, one simply assumes that the cost remains the same, measured as a share of the Gross Domestic Product, as the cost the Joint Tax Committee has estimated for 2016.  Assuming that the cost of tax cuts (and spending increases) remains constant over time as a share of GDP is a standard method that budget analysts use.

Another approach, which relies solely on the Joint Tax Committee estimates, is to compare the cost of various estate-tax proposals in 2016.  This approach avoids the problems with using cost estimates that cover the entire 2007-2016 period.  The advantage is that the 2016 estimate is a good indicator of a proposal’s cost over the long run.  The Joint Tax Committee finds that repeal would reduce revenues by $82 billion in 2016, while the Thomas plan would reduce revenues by $62 billion in 2016.  The Thomas proposal consequently would cost three-fourths as much as full repeal (see table below).

Finally, the Thomas proposal includes other features intended to attract votes.  In particular, the proposal includes a special-interest tax break for the timber industry.  That measure, which is unrelated to the estate tax, would reduce the capital gains taxes owed on certain timber sales.  It appears designed to entice Senators from timber-producing states to vote for the package and thereby to help secure the 60 votes needed to permanently eliminate most of the estate tax.  While the estate and gift tax provisions of the proposal are permanent, the timber provisions would expire at the end of 2009 (though they likely would be extended, at additional cost, in future years).

Many in Congress support the idea of enacting estate tax reforms that would protect the vast majority of estates from tax, while preserving a significant share of the estate tax revenue.  One option would make permanent the 2009 levels that apply to the estate tax — a $3.5 million exemption ($7 million per couple) and a 45 percent rate.  Under this approach, the estates of 997 of every 1,000 people who die will be entirely exempt from tax; only 3 in 1,000 estates will owe any estate tax.  Even this option is costly; it reduces revenues by $159 billion between 2007 and 2016 and by $37 billion in 2016, according to Joint Tax Committee estimates, and these estimates suggest that it would cost $366 billion between 2012 and 2021, or $456 billion if interest costs are included.  Still, it preserves about 55 percent of the revenue lost by full repeal over the long term.

In contrast, even if the capital gains rate were allowed to revert to 20 percent, the Thomas proposal would lose about three-quarters of the revenue lost by full repeal over the long run, according to Joint Tax Committee estimates — and would cost 68 percent more than making permanent the 2009 estate-tax levels.  The Joint Tax Committee estimates show that in 2016 alone, the additional cost of moving from the 2009 levels to the Thomas proposal would be $25 billion.  If the 15 percent capital gains rate is extended, the added cost of the Thomas plan would be still higher (about $30 billion in 2016).[4]  Over the 2012-2021 period, the Thomas plan (assuming a 15 percent capital gains rate) would lose about $285 billion more in revenues than making the 2009 levels permanent (or about $370 billion when the associated interest costs are included).

Finally, all of the additional benefits of the Thomas proposal, relative to the cost of making the tax permanent at the 2009 levels, would flow to the 3 in 1,000 estates that are valued at more than $3.5 million for an individual and $7 million per couple, with the bulk of the added cost going for larger tax breaks for the largest of these estates.

[1] The most recent Kyl proposal featured an indexed $10 million per couple exemption, a rate linked to the capital gains rate for the value of an estate below $30 million, and a rate of 30 percent for the value of the estate above $30 million.  For a more detailed discussion of this Kyl proposal, see Joel Friedman and Aviva Aron-Dine, "New Joint Tax Committee Estimates Show Modified Kyl Proposal Still Very Costly:  True Cost Partially Masked," Center on Budget and Policy Priorities, June 13, 2006.

[4] For additional discussion of the difference between the Thomas proposal and 2009 law made permanent, see Joel Friedman and Aviva Aron-Dine, “High Cost of Thomas Proposal Reflects the Low Effective Tax Rates Estates Would Face:  Proposals Benefits Would Go Primarily to Largest Estates,” Center on Budget and Policy Priorities, revised June 23, 2006.