With the Senate preparing to vote on permanent repeal of the estate tax in June, it is important to take stock of the changes that have already been made to the tax.  As a result of legislation enacted in 2001, the portion of an estate that is exempt from taxation has more than doubled since 2000 and stands at $2 million ($4 million per couple) in 2006.  Because of this increase in the exemption level, only one-fourth as many estates will be subject to tax in 2006 as in 2000, and only five out of every 1,000 people who die this year will pay any estate tax.  The number of taxable estates will fall further when the exemption level rises to $3.5 million ($7 million per couple) in 2009.  Moreover, the bulk of the benefits of the changes made so far and of those that will take effect through 2009 will go to estates valued at less than $5 million.

This report reviews data from the Internal Revenue Service, Congressional Budget Office, and Urban Institute-Brookings Institution Tax Policy Center on the effects of the estate tax changes that have taken place since 2001, and of the additional changes that will occur in the next few years.  Based on these data, we find:

If the goal of estate tax reform is to relieve smaller estates from the tax while preserving a large share of estate tax revenue and focusing the tax on those wealthy estates most able to pay, then this objective has been met by the increases in the exemption level that have taken place so far and will continue through 2009.  Calls to repeal the estate tax or to lower the estate tax rate will only benefit those large estates still subject to the tax and will eliminate an important source of revenue.

Recent estimates from the Urban Institute-Brookings Institution Tax Policy Center provide important insights into the changes that take effect in 2006.[1]  To assess the impact of these changes, the Tax Policy Center compares the estate tax in effect in 2006 under current law ($2 million exemption and a 46 percent top rate) with the estate tax that would have existed under pre-2001 law (a $1 million exemption and a 55 percent top rate).[2]  The data show that the 2006 changes primarily benefit estates valued at less than $5 million, rather than the largest estates.  According to the Tax Policy Center estimates.

Supporters of estate tax repeal have argued that the tax should be eliminated because of its adverse effects on small businesses and farmers.  A recent Congressional Budget Office study is helpful in evaluating these claims.[3]  The study found that few farms and small businesses are affected by the estate tax, and it exploded the myth that family farms and businesses must be sold to pay the tax.

The CBO study also documented that increases in the exemption level, in addition to drastically reducing the total number of estates subject to tax, are also a highly effective means of providing estate tax relief to farms and small businesses.  The CBO study analyzed how many farm and family-owned business estates would have been subject to tax in 2000 had the 2006 exemption level of $2 million ($4 million per couple) been in place.  It found that the number of taxable farm estates would have fallen by more than 90 percent and the number of taxable family-owned businesses by almost three-quarters.  Only 123 farms, and 135 small businesses, would have paid any estate tax (see Figure 2).

CBO also examined the effects of an exemption level of $3.5 million ($7 million per couple), as will exist in 2009.  At this exemption level, fewer than 100 family-owned businesses and only 65 farm estates would have owed any estate tax at all. 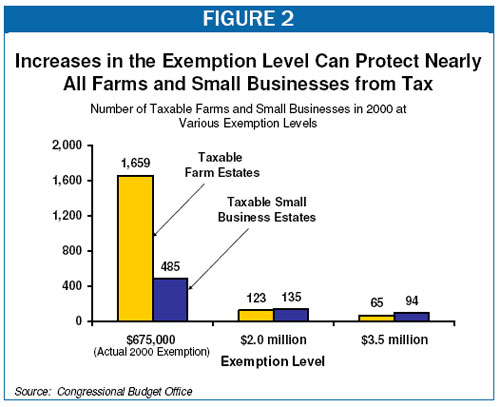 Finally, CBO considered the question of whether the estate tax forces family farms and businesses to be sold.  CBO found that of the few farm and small business estates that would owe any estate tax, the vast majority would have sufficient liquid assets (such as bank accounts, stocks, bonds, and insurance) to pay the tax without having to touch the farm or business.  For instance, at a $3.5 million exemption level ($7 million per couple), only 13 farms would have faced such a liquidity constraint.  Furthermore, those farm and business estates facing liquidity problems would likely have other options available to them — such as spreading their estate tax payments over a 14-year period — that would allow them to pay the tax without having to sell off any of the farm or business assets.

As noted, the estate tax exemption level will rise again in 2009.  In that year, the exemption will be set at $3.5 million ($7 million per couple) and the estate tax rate at 45 percent.  Under the 2001 legislation, the estate tax is repealed in 2010, but then will then come back into effect in 2011 at pre-2001 law levels.  The President and Congressional leaders have called for making repeal permanent.  If instead the 2009 law levels were made permanent, Joint Committee on Taxation estimates indicate that such an estate tax would retain about 60 percent of the revenue that would be lost by permanent repeal.  (Repeal is projected to lose revenues of $776 billion in the first ten years in which its effects are fully felt, or nearly $1 trillion if the costs of additional interest payments on the federal debt are included.[4])  Further, about 66 percent of the cost of making 2009 estate tax law permanent would go towards tax relief for estates valued at less than $5 million.

In contrast to this potential reform option, Senator Jon Kyl is promoting a proposal that would raise the exemption level to $5 million ($10 million per couple) and slash the rate by two-thirds, to 15 percent.  Such a “reform” would differ little from full repeal in terms of cost or regressivity.  The revenue loss from the Kyl proposal would amount to 84 percent of the cost of full repeal, based on estimates by the Joint Committee on Taxation.  Further, only 4 percent of the cost of moving from the 2009 law to the Kyl proposal would be directed towards tax relief for estates valued at less than $5 million.  Instead, 96 percent of the benefits would go to estates larger than $5 million, and 76 percent to estates valued at more than $10 million.

Senator Kyl recently stated, “A lot of people in the business community are still very desirous of having permanent repeal.  But if they see that the votes aren’t there, realistically they would see that certain types of compromise would be almost as good as full repeal.”[5]  Indeed, this is certainly the case with Senator Kyl’s proposal, which would provide nearly as large a tax cut to the largest estates as full repeal and would be nearly as costly to the Treasury.

The stark differences in distributive impact and cost between Senator Kyl’s proposal and a reform that would make 2009 law permanent are largely due to the different structure of the proposals.  Reform along the lines of 2009 law would raise the exemption level dramatically while lowering the top rate only from 55 to 45 percent.  For this reason, much of the cost of the reform would be directed towards reducing the number of estates that pay any estate tax at all and thus towards smaller estates.

In contrast, estates valued at less than $5 million would receive only 4 percent of the benefits of moving from 2009 law to the Kyl proposal, in large measure because they already would owe so little estate tax.  If 2009 law were made permanent, the effective tax rate (the percentage of the estate actually paid in tax) would average only 7 percent for taxable estates valued at less than $5 million.  Thus, these estates simply would have little to gain from any additional estate tax changes.

Moreover, the central element of the Kyl proposal is the drastic reduction in the tax rate to 15 percent.  This rate reduction is the main source of the proposal’s massive revenue losses; it accounts for about 90 percent of the cost of moving from a reform that would make 2009 law permanent to the Kyl proposal.  Lowering the tax rate does not exempt more estates from tax, and the benefits from a rate reduction go primarily to those paying the most in estate taxes: that is, the very wealthiest.

[4] We provide estimates for the cost of repeal in the first ten years in which its effects would be fully felt, 2012-2021.  Since Joint Committee on Taxation estimates are available only through 2016, we assume that revenue lost by repeal in 2016 remains constant as a share of the economy through 2021.