Each year, the Tax Foundation releases a report projecting “Tax Freedom Day,” which it describes as the day when Americans will have “earned enough money to pay this year’s tax obligations at the federal, state, and local levels.” [1]

The Tax Foundation’s “Tax Freedom Day” report is plagued by two major problems. First, its estimates of state and local tax burdens suffer from a number of serious methodological flaws (see the box below). Second, over the years, many journalists and policymakers have misinterpreted the Tax Foundation’s report as reflecting the tax burdens faced by typical middle-income workers.

The Tax Foundation itself acknowledges this issue in a methodology paper accompanying its report, pointing out that its estimates reflect the “average tax burden for the economy as a whole, rather than for specific subgroups of taxpayers.” [2] Journalists and others who report on “Tax Freedom Day” as if it represented the day until which the typical or average American must work to pay his or her taxes are misusing these figures and fostering serious misimpressions about the level of taxes most Americans pay. 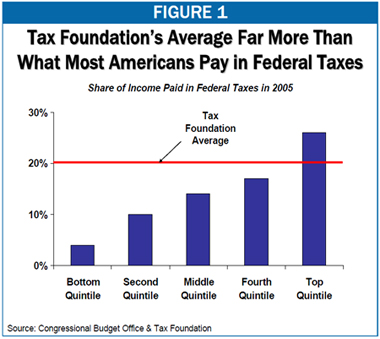 The Tax Foundation estimates that in 2005, the federal effective tax rate was 20.2 percent. But as Figure 1 shows, the Congressional Budget Office (CBO) estimates that households in each of the bottom four quintiles of the income scale paid less than 20.2 percent of their income in federal taxes in 2005. [4] (2005 is the most recent year for which the CBO data are available.) Only households in the top quintile paid a higher amount: 25.5 percent. [5] The CBO estimates suggest that some 80 percent of U.S. households pay a smaller share of their incomes in federal taxes than the overall federal effective tax rate. [6]

The following example shows how the Tax Foundation’s methodology can overstate the tax burdens of the typical family. Suppose four families with incomes of $50,000 each pay $2,500 in taxes — 5 percent of their income — while one wealthy family with income of $300,000 pays $90,000 in taxes — 30 percent of its income. Total income among these five families is $500,000, and the total amount paid in taxes is $100,000. Thus, 20 percent of the total income of the five families goes to pay taxes. But the 20 percent figure is highly misleading as an indicator of the typical tax burden for families in this group.

To be sure, an average figure like the one calculated by the Tax Foundation can yield useful information. Revenues measured as a share of the economy or as a share of national income is the most reliable metric for comparing revenue levels over time or across countries. The fundamental problem occurs when the tax burden figure that the Tax Foundation calculates is taken to represent the tax burden of the typical American worker.

For example, in 2006, the Wall Street Journal wrote, “The Tax Foundation reports that the average American works 116 days of the year to pay their tax bill (emphasis added).” [8] Similarly, Senators Charles Grassley and Judd Gregg, drawing on the Tax Foundation’s report, wrote in 2007 op-ed, “Americans must workan average of 77 days per year to pay their federal taxes…” [9] Senators Grassley and Gregg were not discussing tax revenues as a share of the economy. They were discussing the tax burdens of typical American families.

Because the federal income tax system is progressive, states with relatively wealthy residents end up under the Tax Foundation’s methodology with a higher federal tax burden than other states. The fact that one state has higher-income residents than another state has nothing to do with the level of state and local taxes in the state. Yet by trumpeting state-level Tax Freedom Days that differ across the states, the Tax Foundation presentation is likely to lead to the misimpression that differences in burdens imposed by state and local taxes account for the differences across states in the Tax Foundation’s “average tax burden,” when that often is not the case.

The Tax Foundation uses a procedure to allocate state corporate, severance, and tourism taxes based on the residence of the consumers who purchase products that businesses sell (adjusted for taxes that tourists pay). This is likely to lead to further misimpressions about the role of a state’s tax policies on the tax burdens its residents are said to face. For example, when Alaska collects taxes from oil companies based on the amount of oil they produce in the state, the Tax Foundation does not count those taxes as part of Alaska’s revenue. Rather, it adds those taxes to the tax burden in the states where oil is consumed. Maine residents, for example, consume a significant amount of fuel and so get allocated a large share of these Alaska taxes. Yet state legislators in Maine cannot have much impact on the level of taxes that Alaska or other oil-producing states levy on oil.

Further, the Tax Foundation highlights the tax burden for the current calendar year, making its own estimates of the taxes that will be collected during the year in the thousands of state and local jurisdictions around the country. Despite presenting these estimates as definitive, they are, in fact, speculative projections that have often proven to be significantly off-target when the actual data on state and local taxes are subsequently collected and published by the Census Bureau. For example, the Tax Foundation’s 2002 report claimed that tax burdens had risen since 2000 in 38 states, that five states had lower tax burdens, and seven had no change. By 2005, the Tax Foundation had found it necessary to revise its 2002 estimates to show that only eight states (rather than 38) had higher tax burdens in 2002 than in 2000, while 39 had lower tax burdens and three had no change. And when the Census Bureau released its data for 2002, it found that only four states’ tax burdens had risen, while tax burdens in 43 states had fallen (burdens were unchanged in three states). In its reports, the Tax Foundation does not adequately acknowledge the possibility that its data may be erroneous. Nor does the Tax Foundation give prominent attention to the revisions it makes when its previous estimates prove to have been faulty.

As the Tax Foundation itself pointed out in its 2007 report, however, government revenues fund health and medical care for elderly and low-income Americans, and they fund a significant fraction of the medical research that generates valuable health care innovations. Government revenues also fund Social Security payments that enable elderly households to pay for food, clothing, and housing.[10] Moreover, government revenues fund roads and bridges needed for private transportation purchases (e.g. cars) to have value. And they fund the educational system, justice system, and other basic infrastructure without which Americans would not be able to earn the incomes they currently do at the jobs they currently hold.

Of course, there are important debates to be had about the appropriate size of government. But these debates are not furthered by the Tax Foundation’s suggestion that Americans spend part of the year working to pay taxes and part of the year working for “themselves.” Rather, these debates require careful consideration of the merits of trading off public for private goods and services, recognizing that both generate value for American households.

[6] Of course, the figure for each quintile is an average for that segment of the population. Thus, some households, mostly in the fourth quintile, probably pay a larger share of their income in federal taxes than the Tax Foundation’s reported average. But many households in the top quintile likely pay less, since the top quintile average is pulled up by households at the very top of the income scale.

[10] Ignoring this issue actually gives rise to a significant technical problem in the Tax Foundation’s report. In the pie charts on page 1, which compare the total effective tax rate with the share of total national income spent on food, clothing, and other purchases, government transfers to households — such as Social Security and Medicare — appear both in the tax slice and in the various categories of private consumption.