A recent paper by Federal Reserve economists Gene Amromin, Paul Harrison, and Steve Sharpe finds that the 2003 dividend and capital gains tax cuts did not raise U.S. stock values. As a Wall Street Journal article summarizes it, the study “concludes that the tax cut … was a dud when it came to boosting the stock market…”[1]

To reach this conclusion, the study looks at stock price data for the two periods when the market should have responded most strongly to the dividend and capital gains tax cuts: the week following the initial announcement of the President’s tax-cut proposal and the weeks surrounding the tax cuts’ passage. Rather than looking at U.S. stock prices in isolation, the study compares changes in the aggregate value of U.S. stocks in these periods to changes in European stock values and changes in the value of real estate investment trusts (REITs). The U.S. tax cuts should have had little or no effect on European stock markets, since U.S. investors hold only a small fraction of European equities, and U.S. holders of foreign assets generally do not benefit fully from U.S. tax cuts. The REIT market should have been entirely unaffected by the tax change, since REIT dividends were ineligible for the tax cut.

The study finds that both European and REIT aggregate stock values closely tracked U.S. aggregate stock values during the periods studied (see graph below). The authors infer that all markets studied were responding to other factors, with the tax cuts playing little or no role. [2] As Sharpe told the Wall Street Journal, “any effect of the dividend tax cut should have resulted in a differential in performance” between U.S. and European markets, and the study found no such differential.[3] The authors conclude: “We fail to find much, if any, imprint of the dividend tax cut news on the value of the aggregate stock market.” [4] 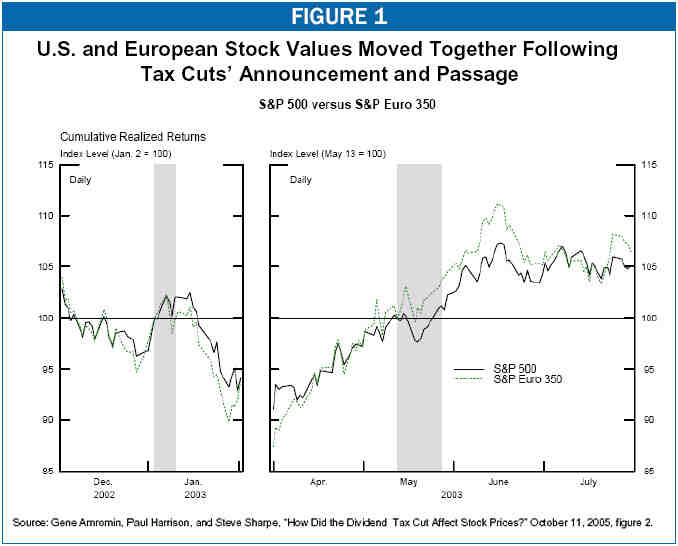 Why Did the Tax Cut Fail to Boost Stock Values?

In their study, the authors reach the conclusion that the dividend and capital gains tax cuts failed to boost stock values, but they do not reach a conclusion as to why.

They do suggest two possible explanations. The first is that the tax cuts had little effect on stock prices because such a significant fraction of U.S. corporate stock is held in tax-preferred accounts or by non-profits and pension plans. Dividends paid on such stock were already exempt from personal income taxes and thus could not benefit from the 2003 dividend tax cut.

The second possibility the authors consider is that the tax cuts failed to boost stock prices because they were temporary (scheduled to expire at the end of 2008). To evaluate this explanation, the authors compare changes in stock prices (in the period after the tax cuts’ announcement and the period surrounding their passage) among firms paying high dividends to changes in stock prices among firms paying low dividends. While stockholders in firms that pay out little of their value in dividends may have expected little gain from a temporary tax cut, stockholders in firms that pay out much of their value in dividends should have expected significant gains, and so stock prices in these firms should have risen relative to those of other firms.

The authors do find that the high-dividend stocks performed better in the period immediately following the tax cuts’ announcement and the period surrounding the tax cuts’ passage, but they find that the performance differential dissipated quickly. Thus even in the case of firms whose investors would benefit significantly from a temporary dividend tax cut, there was no persistent stock market response. The authors also find that companies with no dividends performed better in these periods than high-dividend firms. If these companies were counted as “low-dividend,” it is likely that much, if not all, of even the short-lived difference between high-dividend and low-dividend stocks would disappear.

Moreover, in considering the implications of these results for policy decisions, it is important to remember that the tax-cut extensions currently under discussion themselves are temporary changes, and so would not be expected to have any more of an effect than the 2003 temporary tax cuts. In addition, even if a permanent extension of the dividend and capital gains tax cuts had more of an effect, such an extension would come at a large cost, adding $162 billion to deficits over ten years ($189 billion if interest costs are included), which would reduce national saving and thereby adversely affect long-term growth. Because of this effect and the large, unsustainable deficits the nation faces in coming years, investors likely would remain uncertain about the stability of the tax code – and of the low dividend and capital gains tax rates – even if these tax cuts were extended permanently. Investors would recognize that taxes would eventually have to increase above their unsustainably low level and likely would respond to a “permanent” extension of these tax cuts based on an expectation that the extension itself could prove temporary and be reversed in whole or in part at some point in the future.

[2] One might wonder whether, if U.S. and European stock values always tend to move together, their close relationship during the periods studied really proves that the U.S. tax cut had no effect. The authors address this issue by examining what they term abnormal returns, a measure of whether movements in the two stock markets are less than usually correlated. If the U.S. tax cut was having a significant effect in the U.S., then the two markets should have been less than usually, even if still highly, correlated. The study finds that this was not the case.