States should adopt two important new options, enacted in February under the American Recovery and Reinvestment Act (ARRA), that would help more low-income Medicaid beneficiaries maintain their health coverage when they reenter the workforce or see their earnings increase, while also lowering states’ administrative costs.

Under the Transitional Medical Assistance (TMA) program, low-income Medicaid beneficiaries who would otherwise become ineligible for Medicaid due to an increase in wages or hours at a job are entitled to up to 12 months of Medicaid benefits.  This temporary coverage increases the likelihood that low-income people who start a job or find higher-paying work will be healthy and productive.  They will not have to fear that they or their families will lose the security of health coverage because they found a job or will earn higher pay.

TMA provides vital support for people leaving welfare for work.  Before ARRA’s enactment, TMA was slated to expire on June 30, 2009 (although Congress has always extended it when it was scheduled to expire).  In addition, complex administrative rules have kept many eligible low-income families from participating in TMA and resulted in other families receiving less than the full 12 months of transitional coverage.  More working-poor families have been uninsured as a result.

ARRA extends the TMA program and allows states to improve participation among TMA-eligible families.  These changes make it more likely that low-income families — some of whom have recently become eligible for Medicaid because of recession-related job losses — can maintain access to needed medical services when the parents in these families eventually find new jobs, increase their work hours, or switch to higher-paying employment.  These changes also allow states to greatly reduce the administrative burdens associated with providing TMA coverage.

The TMA provisions in ARRA do the following:

TMA was created in 1984 under President Reagan, expanded in 1988, and established in its current form in 1996.  Congress has extended the program multiple times with strong, bipartisan support.  Under TMA, states are required to provide up to a year of Medicaid coverage to low-income people with children who would otherwise become ineligible for Medicaid because of increased employment-related income.[1]

TMA has filled an important gap for Medicaid beneficiaries, many of whom have moved from welfare to work and often lack access to health insurance through their employers.  The National Governors Association has called TMA a “crucial work support,” noting that, “without access to regular health care, health problems of a new worker or the worker’s family members are likely to lead to greater absenteeism and possibly to job loss.”[2]  TMA also diminishes any incentive for families on Medicaid to forgo a raise or avoid finding a job because it would mean giving up the security of health coverage.

TMA is especially critical for low-income parents, who often find that taking a job with very low wages would result in income too high to qualify for Medicaid. [3]  In 2009, the income eligibility limit for working parents under Medicaid is just 68 percent of the poverty line in the typical (or median) state, or about $12,450 per year for a family of three.[4]   Without TMA, many parents who work their way off cash welfare assistance but remain in poverty would be uninsured.

Despite widespread agreement that TMA is an important program to help low-income families get and retain jobs — an important overall goal of ARRA — TMA has not been entirely successful in reaching eligible families, in part because of its administrative complexities.  Studies of families leaving welfare found that these families often did not receive Medicaid coverage that they likely were eligible for, and that TMA participation rates vary widely from state to state.[5]  During the last decade, the Government Accountability Office, members of Congress of both parties, and the Clinton and Bush administrations all have proposed changes to TMA to help encourage greater enrollment of eligible families and ease bureaucratic requirements for states.  Now, some of those changes have finally become law.

The new changes to TMA will remove some of the major barriers to enrollment of eligible families in TMA, as explained below.[6]

Extension of TMA: The law extends the TMA program through December 31, 2010.  The temporary increase in the federal Medicaid matching rate, also included in ARRA, applies to TMA costs that states incur from October 1, 2008 through December 31, 2010.  States consequently will have additional help in funding the cost of enrolling eligible TMA families during this time.

Twelve months of continuous coverage: Beginning in July 2009, states will have the option to provide 12 months of uninterrupted TMA coverage without burdensome income verification.  Currently, to receive a second six months of TMA benefits, families generally are required to submit written reports of earnings and child care expenses to states during the fourth, seventh and tenth months of TMA coverage, to show that their incomes remain below 185 percent of the poverty line.  The Government Accountability Office identified this as a barrier to providing families the full amount of TMA coverage for which they qualify.  Several states told GAO that families typically received TMA for only six months — rather than the 12 months for which many families otherwise were eligible — because the families did not complete the extensive paperwork required.[7]  The new law permits states to award 12 months of TMA without requiring families to submit these detailed reports.  This will reduce states’ administrative burdens and costs, by allowing them to stop collecting and processing the income reports and sending notices to beneficiaries when the reports are due.

Modification of the “three-of-six-months” requirement:  Also effective July 2009, states will be able to provide TMA benefits to families that did not receive Medicaid for three of the six months preceding the increase in employment-related income that put them above the Medicaid eligibility limit.  Like quarterly income reporting, the “three-of-six-months” requirement has been a bureaucratic obstacle to enrollment of needy families.  Some states have noted that this requirement is inconsistent with the “work first” approach of their welfare programs, which encourage welfare recipients to find work quickly. [8]  The three-of-six-months requirement bars TMA eligibility for people who received Medicaid for fewer than three months.  So, a mother of two children who successfully finds a low-wage job after two months on Medicaid could find herself over the income threshold for Medicaid — but still in poverty and ineligible for TMA.[9]

Under the new law, states can choose to explicitly waive the “three of six months” requirement.  States choosing to do this can provide TMA to families that received Medicaid, or were eligible to receive it, for fewer than three months.  This means that to be eligible for TMA, families would have had to have received Medicaid or been eligible to receive it at some point during the year preceding their loss of eligibility due to job-related income.  But there would no longer be a strict rule that the family had to receive Medicaid for at least three of the previous six months.

With unemployment rising and Medicaid programs under stress, it is desirable for states to reduce administrative costs as much as possible while making sure that low-income families who are unemployed, in low-paying jobs, or on welfare are able to maintain health coverage when they return to the workforce or increase their earnings.  The latest changes to TMA serve both these goals, and states should quickly adopt the newly available options.

[1] Families who become ineligible for Medicaid because of increased income from child-support payments also are eligible, but they are entitled to only four months of TMA coverage.

[3] Cindy Mann, Testimony to the House Energy and Commerce Committee Subcommittee on Health, Kaiser Commission on Medicaid and the Uninsured, April 23, 2002.

[4] Donna Cohen Ross and Caryn Marks, “Challenges of Providing Health Coverage for Children and Parents in a Recession: A 50-State Update on Eligibility Rules, Enrollment and Renewal Procedures, and Cost-Sharing Practices for Medicaid and SCHIP in 2009,” Kaiser Commission on Medicaid and the Uninsured, January 2009.

[9] Recognizing that the “three-of-six-months” requirement was problematic, 17 states had acted as of 2002 to reduce the requirement’s effect as a barrier to TMA coverage.  There were several approaches that states could take to do this.  For example, some states disregarded a family’s income for two or more months in order to keep the family on Medicaid and thereby satisfy the three-of-six-months requirement, while other states granted retroactive Medicaid eligibility.  See April Grady, “Transitional Medical Assistance (TMA) Under Medicaid,” Congressional Research Service, updated January 8, 2008, http://aging.senate.gov/crs/medicaid15.pdf 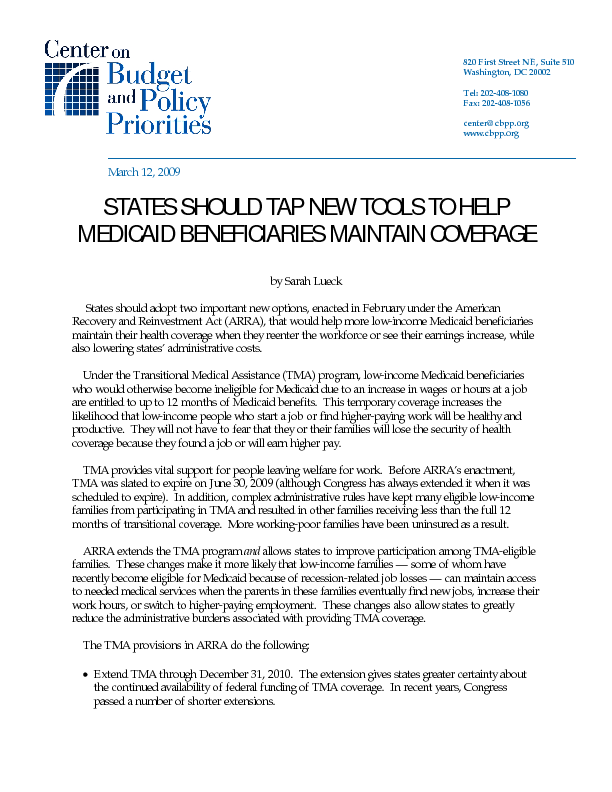