Recent tax collections are considerably higher than last year in most states and, in many cases, exceed states’ projections when they adopted their current budgets in the spring of 2012.  In 31 states for which data were available in June 2013[1] , state tax collections in the first ten months of fiscal year 2013 were 5.7 percent higher than in the same period last year, on average.

A closer look into the tax collection reports available in June 2013 reveals that:

These findings have three important policy implications for states.

First, states without income taxes are missing out on revenue.  Part of the recent revenue boost reflects the fact that income taxes are better at growing with the economy than sales or other taxes.  States that are considering repealing or shrinking their income tax would lose out on this advantage now that the economy appears to be in a sustained recovery.[2]

Second, national factors, not state actions, are driving this revenue growth.  Income tax revenues are up across much of the country, regardless of whether a state has cut tax rates or not.  So, claims that these revenue gains reflect positive “supply-side” impacts of tax cuts appear unfounded.  (Not surprisingly, California’s voter-approved tax rate increase has produced a lot of new revenue.)

Third, states should proceed with caution in using these funds.  While both the improving economy and the temporary tax shift clearly have contributed to revenue growth, it remains unclear how much of the increased growth comes from each of those causes.  A sound strategy — applicable this year as in other years — is that states should use the higher-than-anticipated year-end balances that often result from revenue surges like these to address one-time spending needs such as paying down debt, boosting reserves, or addressing neglected infrastructure needs, rather than permanent tax cuts or new programs.

Here’s some more detail on this revenue surge, what it means, and what it doesn’t mean.

Revenue Growth Shows That It Pays to Have an Income Tax

Much of the recent gains in personal income taxes reflect rapid increases in the incomes of wealthy individuals over the last year.  The Great Recession appears to be following the pattern of recent recessions, in which the incomes of the wealthy recover well before those of low- and middle-income individuals and families.  For example, a recent study of IRS data found that the lion’s share of the gains in family income since the recession have gone to the top:  the incomes of the top 1 percent of families grew by 11.2 percent between 2009 and 2011, on average, but incomes of the remaining 99 percent shrank by an average of 0.4 percent.[4]  States typically tax higher incomes at higher rates, so faster income growth for the wealthy boosts income tax collections.

These robust gains boosted overall tax collections for the fiscal year in most states, as Table 3 shows.

Some of this growth reflects the recovering economy.  The stock market has boomed (the Dow Jones Index rose 25 percent in the past year), and the job market is slowly recovering.  Employment has risen by 1.9 million jobs since July of 2012.

But a significant share of the recent surge in state personal income tax revenues — which include taxpayers’ final income tax payments for 2012, due April 15 — is likely a one-time bump, as the Nelson A. Rockefeller Institute of Government explained in a recent report.[5]  Many wealthy taxpayers sold stocks or collected other income such as bonuses in late 2012 rather than in 2013 in order to avoid the higher federal tax rates (especially on capital gains) scheduled to take effect in 2013.  (In the end, the “fiscal cliff” deal averted most of those increases.)  These actions boosted state revenue collections around the country, but it was a one-time event.

Officials in some states have attributed their growing tax collections to policy actions taken by the state.  Some such claims are stronger than others.  California’s voter-approved tax rate increase has clearly produced significant new revenue.  But other assertions — such as the Kansas revenue secretary’s claim that April’s improved income tax collections prove that the state’s 2012 tax cuts are paying off in economic growth[6] — appear unfounded, since revenues are up in both tax-cutting and non-tax-cutting states.

The Great Recession, the most severe recession in seven decades, blasted holes in state budgets from which they have yet to recover, sharply reducing revenues and causing budget shortfalls totaling well over half a trillion dollars.  The most recent Census data, for December 2012, show that revenues remained about 5 percent below where they were five years earlier, after adjusting for inflation.

The revenue surge since the beginning of 2013 will help revenues recover further.  If preliminary estimates for January through March are correct, revenues are now just over 3 percent below pre-recession levels, after inflation.  But they have still not fully recovered.  Meanwhile, the number of students, elderly, and low-income families in need of services has grown.

Almost every state is required by law to balance its budget — in other words, in the budget plan that policymakers adopt, projected revenues must meet or exceed projected spending.  But estimating future tax collections is inexact in the best of times; it’s even more difficult when the economy is recovering from a crisis that led to record revenue declines.  Understandably, therefore, many states’ revenue estimates for the current fiscal year were conservative.  So it’s no surprise that a number of states are collecting more revenues than projected.

States should proceed with caution as they consider how to use these surplus revenues.  Only time will tell how much of the revenue growth reflects the improving economy (and thus may continue) and how much reflects the late-2012 income shifting described above (and thus is a one-time event).  It’s prudent, however, to assume that revenue growth will slow in coming months.  Goldman Sachs recently attempted a rough estimate and concluded that “it is likely that as much as half the growth in receipts in Q1 [January through March of 2013] was due to income shifting.”[8]

Permanent tax cuts or major new programs, therefore, may not be sustainable.  States can best use the new funds to address one-time spending needs such as paying down debt, addressing neglected infrastructure needs, building up rainy day funds, or making deposits to pension trust funds.

[1] This analysis was conducted in June 2013 when this paper was originally released.

[4] Emmanuel Saez, “Striking it Richer: The Evolution of Top Incomes in the United States,” University of California, Berkeley, January 23, 2013. 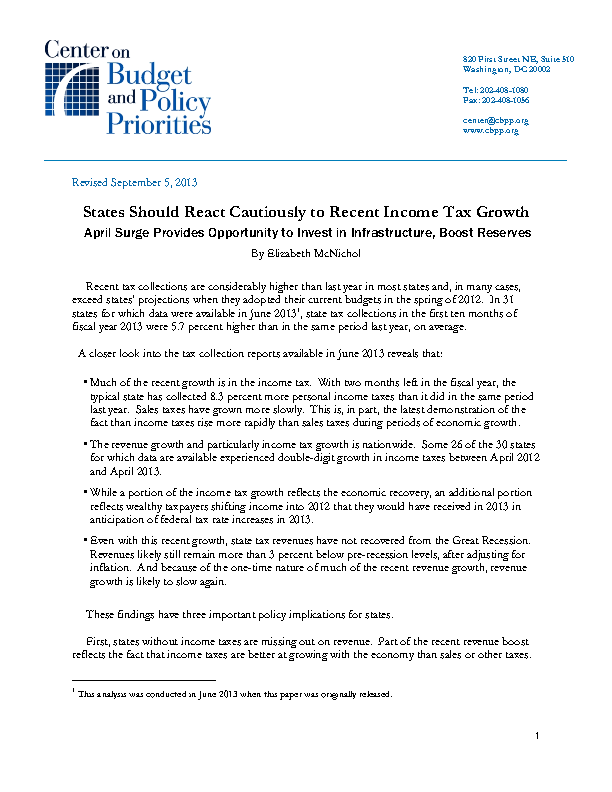