North Carolina’s Senate yesterday passed a budget that undermines key services, including education.  This is one more step in the wrong direction for the state’s policymakers, who have spent this legislative session debating how much to cut taxes for the wealthy, how much to raise taxes on everyone else, and how massive a hole to blow in the state’s funding for schools and other services.

Under the banner of tax reform, both the House and Senate have proposed plans that center around a massive income tax cut that would mainly benefit the rich and corporations.  They’d pay for the cut, in part, with a sales tax expansion that would make the overall state tax bill fall more heavily on low- and middle-income households.  This tax shift would further exacerbate inequality in a state that

already
has a wide gap between the rich and the rest.  For example, poor and middle-class North Carolinians saw their incomes drop between the late 1990s and mid-2000s, while upper-class household incomes rose (see chart).
Image 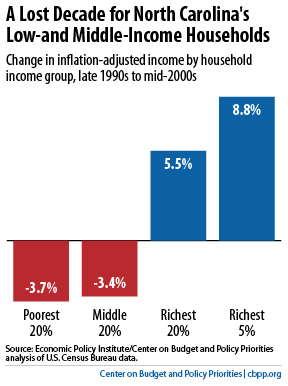 These plans come with hefty price tags.  In addition to raising taxes on low- and middle-income households, the Senate’s tax plan would open up a new budget shortfall of over $1 billion within three years.  The House plan would produce a $1.2 billion shortfall over five years.  That means that key services will take a hit.

Indeed, the Senate’s budget eliminates class size limits for grades K-3, lays off teachers, and cuts thousands of pre-k slots available to at-risk children.  This would occur in a state that over the course of the recession cut its per-student funding for K-12 education 14 percent below pre-recession levels, after adjusting for inflation.  The state also cut its higher education support per student by 15 percent over that time.  As a result, tuition at the state’s public four-year universities has jumped an average of 31 percent per student.

The harmful tax and spending ideas don’t stop there.  The legislature also is looking to eliminate the state’s estate tax — a tax that just 23 of the wealthiest estates paid in 2011 — after slashing benefits for unemployed workers and enacting legislation that scraps the state’s Earned Income Tax Credit, which helps working families with children get on a path to the middle class.

How did the legislature win public support for raising taxes on low- and middle-income households while cutting taxes for the rich and undercutting services that residents and businesses want and need?  Well, they didn’t.  A recent poll shows a large majority oppose the details of the Senate and House tax plans.

May 21, 2013
PreviousEnrollment Assistance Under Health Reform Has Roots in Other Successful Programs
NextThree Reasons Why Killing the Corporate Income Tax Is a Terrible Idea
Stay up to date
Receive the latest news and reports from the Center