The North Carolina House of Representatives voted yesterday to end the state’s earned income tax credit (EITC) for working families at the end of the year.  Coming on the heels of the state’s move last week to slash unemployment benefits by nearly three-quarters, the vote is more bad news for North Carolina workers, even as lawmakers consider eliminating estate taxes on the state’s wealthiest estates. North Carolina would become the first state to eliminate its EITC, a credit that about half of the states have created (see map) to help working families with incomes up to roughly $50,000 make ends meet.  Some 900,000 North Carolinians claimed the credit in 2011.
Image 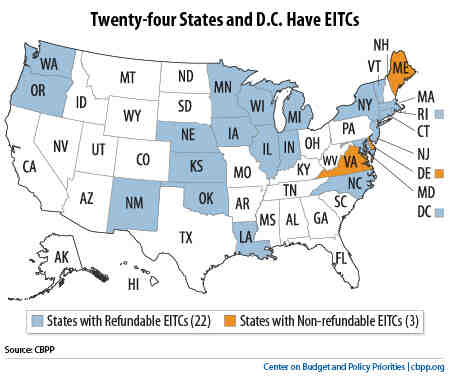 As our backgrounder explains, state EITCs not only help families working for low wages meet basic needs but also reduce poverty, especially among children.  And the benefits can be long-lasting:  low-income children in families that get additional income through programs like the EITC do better and go farther in school and, as a result, work more and earn more as adults. While eliminating North Carolina’s EITC will harm hundreds of thousands of working families, eliminating its estate tax would benefit only a handful of large estates:  those worth more than $5.25 million.  The combined result would be to shift tax burdens from wealthy individuals to middle- and low-income residents.  That isn’t in the public’s interest.
Related Posts:
Topics:
Poverty and Inequality, State Budget and Tax, Economy
PreviousNew Guide to Help Families Use Housing Vouchers to Move to High-Opportunity Neighborhoods
NextExchanges Will Offer Consumers Better Choices in Every State
Stay up to date
Receive the latest news and reports from the Center