| By Nicholas Johnson and Andrew Nicholas

The declining revenues result from the weak economy.

Implications for Education, Health Care and Other State Services

Virtually every state is required to balance its budget, meaning that spending cannot exceed available revenues. As more and more states report declining revenues, they are also projecting that their budgets are out of balance. This means that they must draw down reserves, raise new revenues, or cut spending in order to maintain budgetary balance. Many of these states are in the process of depleting their reserves to fill earlier shortfalls. Some 41 states have already reported or projected budget problems for the current fiscal year (which began July 1 in most states) or the upcoming fiscal year; this number is likely to rise.

Many of the actions states take to balance their budgets will be harmful to families and to the economy. State taxes pay for state aid to K-12 schools, support for public colleges and universities, health coverage for children, families, seniors and people with disabilities, public safety, and transportation. States are enacting cuts in all these areas already. They are also increasing taxes and fees. Both spending cuts and revenue increases take money out of state economies, deepening the nation’s economic problems.

The last time state revenues fell as sharply as they seem to be now was in early 2002, in the wake of the last recession. That revenue decline led to deep cuts in services; for example, more than 1 million people lost health insurance coverage and some two-thirds of states cut K-12 education spending.

An alternative possibility is for the federal government to provide direct assistance to state governments to partially make up for the loss of revenue and thus to help them balance their budgets. This would reduce the extent of spending cuts and revenue increases states must enact. 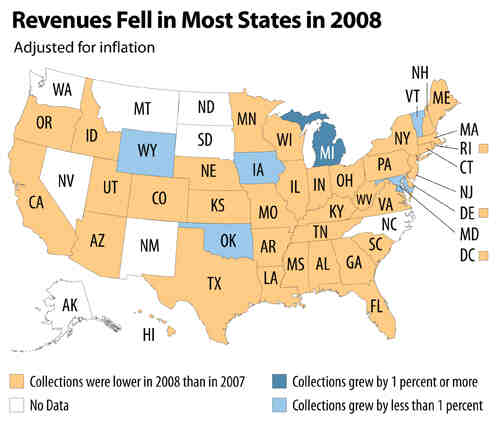 [1] All collections data were provided by the Rockefeller Institute of Government, which in turn collected them from state revenue departments. These data are also the basis for the Institute’s own report entitled, State Revenue Flash Report, November 6, 2008 (online at www.rockinst.org). Inflation adjustments are recalculated in this analysis using the Consumer Price Index (the Rockefeller Institute's analysis uses a slightly different measure of inflation).