A Common and Reasonable Response to Shortfalls

With the recession continuing to widen the gap between shrinking revenues and residents’ increasing need for services, a growing number of states are adopting a balanced approach to their budgets that includes revenue increases as well as spending cuts. Since January 1, 30 states have raised taxes and another seven states are considering doing so.

These steps are in addition to revenue actions taken by 10 states in late 2007 and 2008 as the recession’s effects began to be felt. Although some of these measures are relatively small in terms of the amount of revenue raised, others — such as packages in California, New York, and Oregon — are very significant.

The great majority of states have cut services to families and individuals, including services that benefit vulnerable families. But these cuts have not been sufficient to solve state budget shortfalls; their size is too great for a cuts-only strategy. Were states to rely on spending cuts alone to close their gaps, it would require unprecedented reductions in such essential public services as health care, education, and assistance for the elderly and disabled.

By July 1, the start of the fiscal year in all but four states, most states will have employed a combination of budget solutions that also involves drawing down reserve funds, maximizing the use of federal dollars, and raising taxes. A number of prominent economists have pointed out that budget cuts are more harmful to state economies during a recession than properly structured tax increases, so it is good policy to use tax increases to fill a substantial portion of deficits that exceed the amount that can be closed with reserves or federal funds.

Historically, raising taxes in a recession is a common response by states. During the recession of the early 1990s, 44 states raised taxes by a significant margin (at least 1 percent). In the recession of 2001, 30 states did so. These actions increased annual revenue collections by tens of billions of dollars. (States often go in the opposite direction during periods of strong economic growth: 36 states cut taxes from 1994 to 2001.)

Contrary to what some consider common wisdom, a tax increase can be good policy during a recession. Tax increases are a better option than deep spending cuts — better both for families already suffering due to the recession and for state economies. Tax increases can be designed in such a way that they impose relatively little or no costs on the most vulnerable families; this can be done, for example, by targeting the increase on households with the highest incomes or on profitable corporations. Moreover, as the economists Joseph Stiglitz and Peter Orszag (among others) have noted, tax increases take less money out of the economy than spending cuts, for reasons described more fully below.

One major factor that is reducing, though not eliminating, the need for tax increases in this recession is the American Recovery and Reinvestment Act (ARRA). Enacted in February 2009, it provides substantial money for state governments that includes roughly $140 billion to help alleviate budget shortfalls through funding for education, health care, and other government services. New York, for instance, scaled back the size of a proposed tax increase package by about $1.3 billion after the ARRA funding was announced.

Tax Increases in the Current Recession

So far this year, at least 30 states have enacted tax increases, and (as of July 8) another seven are considering such measures. [1] (See Figure 1.)

State tax increases began with the recession’s onset in late 2007, in order to preserve education, health care, and other services in the face of flattening or declining revenues. At least 10 states enacted tax and revenue measures in late 2007 or 2008. These included major revenue packages in Maryland, Michigan, and New York, and somewhat narrower measures in Alabama, California, Delaware, Massachusetts, New Hampshire, New Jersey, and Rhode Island. Many of those states have enacted or are considering further measures in 2009, reflecting the worsening of the recession.

Tax increases enacted so far in 2009 include increases in personal income taxes (at least 11 states), sales taxes (12 states), business taxes (11 states), tobacco and alcohol taxes (15 states), motor vehicle taxes and fees (12 states), and others (15 states). Many states are raising more than one tax in order to diversify the new revenue sources and distribute the additional revenue collections more broadly.

Eleven states have enacted measures that will increase revenues from the personal income tax in fiscal year 2010. These changes include rate increases, the addition of new upper-income tax brackets, and reductions in various credits, exemptions, and deductions. Major income tax increases enacted in 2009 include:

In 2009, 12 states have increased sales tax revenues by such means as raising rates, expanding the tax base to cover previously untaxed goods and services, and administrative changes. The following sales tax increases occurred:

At least 15 states have increased excise taxes on tobacco and alcoholic beverages.

Other Taxes and Fees

In addition to the 30 states that have enacted tax increases, policymakers in another seven states had before them proposals to do so as of early July. As budget deliberations continued, these states had on the table tax increases that were either included in executive budget proposals or supported by legislative leaders: Arizona, Connecticut, Illinois, Michigan, North Carolina, Ohio, and Pennsylvania.

Tax Increases in Past Recessions

For states to raise taxes in this recession is consistent with the experience of the past two recessions. 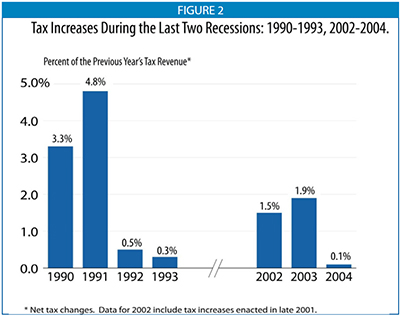 The tax increases occurred in a diverse group of states. States raising taxes during each of those periods included those with Democratic governors or legislatures and those led by Republicans. States in all regions of the country raised taxes. By most standards, the recessions of 1990-91 and 2001 were relatively mild. Had the recessions been more severe, the tax increases likely would have been greater.

Is It Good Policy for States to Raise Taxes in a Recession?

During a recession, unemployment rises, families have a harder time paying for necessities, and many either lose or can no longer afford health coverage. By raising taxes, states can help ensure that those families and individuals hurt most by the recession do not face even more difficulties because of cuts in government programs and services they need, including those involving assistance with housing and health care, or access to higher education. Unfortunately, many of the spending cuts that states have enacted or are considering would have the most harmful impact on low- and moderate-income families and others hit hard by the recession. Tax increases can avert such cuts.

Tax increases have another advantage over spending cuts: they are often better for a state’s economy. During recent deliberations in New York over how to close a growing budget gap, Governor Paterson and the legislature received a letter from 120 economists in the state. Citing “economic theory and historical experience,” the letter observed that “raising taxes during a downturn — particularly taxes that affect only higher-income families — is generally better for a state’s economy, and better for its citizens, than sharp budget cuts.”

The letter went on:

“The reasons are simple. Almost every dollar that states and localities spend on aid for the needy, salaries of public employees, and other vital services enters the local economy immediately. So if states cut their spending in these areas, overall demand suffers at a time when demand is already too low and support services are most needed.

“The alternative — raising taxes — also reduces spending, but by less than budget cuts of comparable size. And by targeting these taxes appropriately, their negative effects can be minimized. For example, high-income households typically spend only a fraction of their income and save the rest. As a result, each $1 increase on taxes on high-income households will reduce their spending by much less than $1.” [5]

The letter echoed the conclusions of a paper written during the last recession by Columbia University professor and Nobel Prize winner Joseph Stiglitz and Peter Orszag, now director of the U.S. Office of Management and Budget, asserting that spending cuts can be more harmful for a state’s economy in a recession than tax increases.[6]

The Recent Economic Experience of States That Raised Taxes in Recession

As Table 1 shows, states that had enacted significant tax increases (more than 1 percent of revenues) in the 2002-04 period saw growth rates in personal income, employment, and the median wage from 2004 to 2007 that closely matched national averages. Furthermore, a number of states that enacted significant tax increases during the early 2000s subsequently experienced above-average growth in these key economic indicators.

On the other hand, a number of states that did not raise taxes, or cut them, during the last recession subsequently saw slower-than-average economic growth. Among them are Iowa, Kentucky, Minnesota, Missouri, New Hampshire, and Wisconsin. Those states’ decision to avoid tax increases (and, in some cases, to enact large cuts in services) failed to protect them from below-average growth in both personal income and employment during the subsequent period.

In short, neither economic theory nor experience supports the idea that states should shy away from raising taxes in a recession for fear of harming their economic performance.

In the current recession, state budget shortfalls are projected to exceed $350 billion over the next two-and-a-half years. Even with assistance from the federal stimulus legislation (the American Recovery and Reinvestment Act), states will continue to face large budget gaps. The $135 billion to $140 billion that ARRA provides states to help balance budgets is expected to cover only about 40 percent of aggregate shortfalls. [7] The remaining shortfalls are still too large to close with budget cuts alone; tax increases should remain on the table in most states. Indeed, most of the tax increases described earlier in this paper were proposed and/or enacted after passage of ARRA.

There is another reason that states may wish to consider raising revenues in tandem with using ARRA funds. Tax increases can be structured to be a recurring revenue source. By contrast, the ARRA funds that states can use to balance their budgets generally are available only until state fiscal year 2011, so federal aid to states likely will return to pre-ARRA levels starting in 2012. States that increase taxes to close a portion of their 2010 and 2011 gaps will find it easier to adjust to the loss of federal revenues in 2012 because they will have the recurring tax revenues to fall back on.

[1] This analysis attempts to capture states that have enacted or are considering measures that will increase net tax revenues relative to current law. Because some states have yet to adopt their budget for fiscal year 2010, these results are subject to change. A previous version of this analysis included Georgia as having enacted tax increases. Since then, Georgia enacted a number of tax cuts, resulting in a net decrease in total tax revenues, and was removed from the current analysis.

[2] These measures were enacted in February with the goal of balancing the state’s FY 2010 budget. The deepening recession, however, has thrown the budget out of balance again, necessitating additional spending cuts and/or revenue increases (probably both).

[3] The reduction in the property tax refund was not passed by the Minnesota legislature, but is scheduled to take effect in FY2010 through a process known as “unallotment,” a constitutional provision allowing Minnesota’s governor to make unilateral cuts when the state faces a budget deficit.

[4] Nicholas Johnson and Daniel Tenny, “The Rising Regressivity of State Taxes,” Center on Budget and Policy Priorities, January 15, 2002, https://www.cbpp.org/sites/default/files/atoms/files/1-15-02sfp.pdf. A “significant” tax increase is one that exceeds 1 percent of a state’s tax revenue.

[6] Peter Orszag and Joseph Stiglitz, “Budget Cuts vs. Tax Increases at the State Level: Is One More Counter-Productive than the Other during a Recession?” Center on Budget and Policy Priorities, revised November 6, 2008, https://www.cbpp.org/sites/default/files/atoms/files/10-30-01sfp.pdf. Of course, it would be preferable if states had to neither make large spending cuts nor raise taxes, but that is not an option for most states.