Share of Americans Without Health Coverage Edged Down Again in 2012

The Census Bureau announced Tuesday that the percentage of Americans without health insurance coverage declined in 2012 for the second consecutive year.  (See Figure 1.)  The number of uninsured Americans remained unchanged in 2012.

The Census data indicate that coverage gains among children, expanded private coverage among the non-elderly, and increased enrollment in Medicare as the population ages were the primary contributors to this reduction.  Health reform will make greater progress in reducing the ranks of the uninsured in coming years as its major coverage expansion provisions take effect.

The share of children who were uninsured fell from 9.4 percent in 2011 to 8.9 percent in 2012 — a historic low — due primarily to gains in private coverage.  Enrollment in Medicaid and the Children’s Health Insurance Program (CHIP) among children remained steady, likely in part because of a health reform requirement that states maintain their eligibility rules and procedures for Medicaid and CHIP.  The 8.9 percent uninsurance rate among children is more than a quarter below the 1999 level, which is the first year for which comparable Census data were collected.

In addition, the share of non-elderly people with private coverage rose between 2011 and 2012.  The first such increase since 2000, this likely reflects the improving economy, with more people working full time and thus more likely to have access to job-based coverage.

The overall gains in coverage also reflected a significant increase in the number and percentage of Americans with public health insurance — principally through Medicare.  More people enrolled in Medicare as the population aged.  This likely contributed to the drop in the percentage of all Americans who are uninsured, because some previously uninsured near-elderly people became eligible for Medicare when they turned 65.

Much larger reductions in the share and number of uninsured Americans are expected in 2014, when health reform’s major coverage expansions take effect.  The Congressional Budget Office (CBO) estimates that 25 million people who otherwise would be uninsured will eventually gain coverage as a result of health reform.  (The coverage gains will ultimately be larger than that if most or all states eventually adopt health reform’s Medicaid expansion for low-income non-elderly adults, for which the federal government will pick up nearly all of the cost.)

Health reform opponents may seek to delay or repeal key elements of the Affordable Care Act as part of legislation to avert a government shutdown or a default on the nation’s debt.  Such actions would undermine the expected progress in reducing the ranks of the uninsured.  For example, CBO reported recently that a one-year delay in the requirement that individuals have health insurance or pay a penalty starting in 2014 would result in 11 million Americans who would otherwise have coverage remaining uninsured in 2014, as well as cause health insurance premiums in the individual health insurance market to be higher than they will otherwise be. 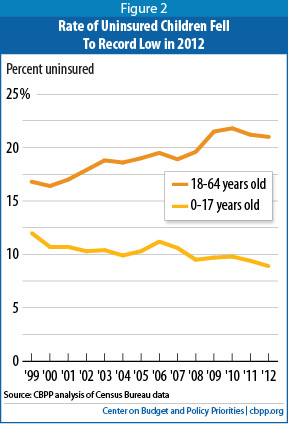 Coverage levels, however, still remain below the levels before the recession.  Some 3.9 million more Americans were uninsured in 2012 than in 2007, and the percentage of people who are uninsured was 0.7 percentage points higher.

Share of Children Without Health Coverage Falls to Historic Low

Children’s coverage improved in 2012, with the share of children who lack insurance dropping to ­­­a historic low of 8.9 percent.  (See Figure 2.)  This was due to increased private coverage among children, which rose from 59.4 percent in 2011 to 60.1 percent in 2012, while the share of children enrolled in Medicaid and CHIP remained unchanged at 35.9 percent.  Health reform helped Medicaid and CHIP hold steady by requiring states to maintain their Medicaid and CHIP eligibility levels and not make it more difficult to enroll (for children, through the end of fiscal year 2019; for adults, until 2014).

The percentage of children who are uninsured has fallen by one-fourth since 1999 due to the extension of Medicaid and CHIP to more children, despite erosion in private insurance coverage over this period.[2]

Private Coverage Increased Among the Non-Elderly

For the first time since 2000, the share of those under 65 with private health insurance coverage increased, from 64.8 percent in 2011 to 65.2 percent in 2012.  Prior to this modest improvement, private insurance coverage among the non-elderly had declined in nine of 11 years since reaching a high of 75.0 percent in 2000.  Some of this coverage gain is explained by the fact that the share of those aged 18 to 64 who were working increased 0.7 percentage points in 2012, equivalent to more than 1.6 million additional workers.  Most of the employment growth was among full-time workers, who are most likely to have access to health coverage offered through their employers.

Notably, the share of the non-elderly with employer-based coverage remained steady at 58.4 percent, despite recent claims that health reform is encouraging employers in significant numbers to drop coverage for their workers.

Overall public program coverage grew between 2011 and 2012.  Some of the increase was due to the aging of the population; the share of the population covered by programs like Medicare, Medicaid, and CHIP grew from 32.2 percent in 2011 to 32.6 percent in 2012.  This was primarily driven by increased Medicare enrollment.  Two million more people enrolled in Medicare between 2011 and 2012 as the share of the population 65 or older reached a historic high.[3]   Some 14.2 percent of 64-year-olds were uninsured in 2011, but most became eligible for Medicare upon reaching age 65 in 2012.[4]   Only 1.5 percent of people aged 65 and older lacked health insurance last year.

Under health reform, states can expand Medicaid coverage starting in 2014 to nearly all individuals up to 133 percent of the poverty line and thus make substantial progress in covering many uninsured low-income adults.

CBO has estimated if all states instituted the Medicaid expansion, 17 million low-income people would eventually gain Medicaid coverage, the overwhelming majority of whom would otherwise be uninsured.  If many states continue to turn down the expansion, however, health reform will make less progress in covering low-income people — especially working-poor parents and other low-income working adults — who are now uninsured.

CBO expects that health reform will eventually reduce the number of people who would otherwise be uninsured by 25 million, and reduce the share of non-elderly individuals without health insurance by 9 percentage points.  Repealing, defunding, or delaying the ACA or its key coverage provisions, as some policymakers are demanding, would sharply cut back or entirely eliminate these expected large coverage gains.

For example, CBO reported recently that a proposal to delay for one year the ACA’s requirement for individuals to have coverage or pay a penalty, which House leaders may try to attach to legislation to prevent a default on the nation’s debt, would raise the number of uninsured Americans by about 11 million in 2014 relative to current law.  That would reduce health reform’s expected coverage gains by nearly 85 percent in that year.  Delaying the individual mandate would also raise premiums for health insurance in the individual market in 2014 and could severely disrupt the new health insurance exchanges just as the open enrollment season is about to begin.[6]

The percentage of Americans without health insurance coverage declined in 2012 for the second consecutive year, primarily as a result of coverage gains among children, greater private coverage for the non-elderly, and increased Medicare enrollment as the population aged.

Much larger reductions in the share and number of uninsured are expected in 2014, when health reform’s major coverage expansions take effect.  CBO estimates that 25 million people who otherwise would be uninsured will eventually gain coverage as a result of health reform.  And this progress will be substantially greater if all states adopt the Medicaid expansion for low-income adults.  Policymakers should reject any effort to delay, defund or repeal health reform, which would eliminate or sharply reduce the progress that will otherwise be made in coming years in significantly shrinking the ranks of the uninsured.

[2] The Census Bureau began collecting health insurance coverage data in 1987.  Since then, it has made several changes to the way it collects data, the questions it asks, and the sample design of the Current Population Survey.  Thus, a comparable series of data is available only back to 1999.  The decline in the uninsured rate among children would be even greater (though the magnitude cannot be known) were we able to compare the 2012 estimates to data for 1997, the year before CHIP implementation began.

[3] The baby boom generation is generally thought of as people born between 1946 and 1964.

[4] Based on Center on Budget and Policy Priorities analysis using the 2012 Current Population Survey data.