House Energy and Commerce Committee Chairman Fred Upton recently indicated that the House may vote again on a one-year delay of health reform’s individual mandate — which will require most Americans to obtain health coverage or pay a penalty starting in 2014 — citing the current difficulties in enrolling through the federal exchange website.[1]  The Administration has already issued guidance clarifying that any individual now without health insurance who enrolls in exchange coverage by the end of the open enrollment period on March 31, 2014 would not have to pay a penalty.[2]  Most importantly, a one-year delay in the individual mandate  would adversely affect millions of Americans.  The Congressional Budget Office (CBO) has estimated that such a delay would cause 11 million more Americans to remain uninsured in 2014 and result in higher premiums for many others.  It also would disrupt the new health insurance exchanges in the middle of the open enrollment season . 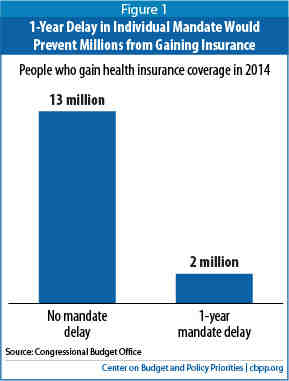 Earlier CBO estimates indicated that permanently repealing the mandate would raise average health insurance premiums in the individual market — inside and outside the new health insurance exchanges — by 15 percent to 20 percent, amounting to hundreds or thousands of dollars a year in higher premium charges for large numbers of individuals and families.  Without the individual mandate, the exchanges may well not be viable over the long run; the higher premiums would discourage many healthier people from enrolling, sending premiums up still more.

Indeed, that’s likely a core goal of those who seek a one-year delay.  A year from now, they would demand another one-year delay and then another or outright repeal (especially if ACA opponents pick up more seats in coming elections).  Thus, we should see the one-year delay for what it is — a central element of an effort to dismember health reform over the next few years.

Finally, a delay in the mandate would severely disrupt the open-enrollment season (which started on October 1), and likely push back the date at which coverage through the exchanges will first be in effect, scheduled for January 1, 2014.  Insurers have submitted premium rates for plans they will offer in 2014 based on the assumption that the mandate will be in effect, as the law requires.  If Congress cancels the individual mandate for 2014, insurers will very likely withdraw their bids, demand time to calculate higher premiums, and submit new, and likely substantially increased, premium rates.

Without a Mandate, Millions More Americans Will Be Uninsured

The individual mandate will spur more people without coverage to enroll in the health insurance options available to them in 2014 — through their jobs, public programs like Medicaid and the Children’s Health Insurance Program (CHIP), or subsidized coverage through the new health insurance exchanges.  Without the mandate, many fewer people would enroll in health coverage.

Outside analysts examining the effects of repealing the mandate entirely have produced similar estimates:

Starting in 2014, the ACA prohibits many of the most troublesome practices of health insurers in today’s flawed individual market — such as denying coverage to people with pre-existing conditions like cancer or diabetes, or charging sick people higher premiums.

Without an individual mandate to encourage people to enroll in coverage, these market reforms would make health care coverage less affordable by enabling older and sicker people (who largely have been shut out of the individual insurance market) to buy coverage in the individual market while allowing healthier uninsured people to wait until they get sick to buy it.  The pool of people with coverage in the individual market would get older and sicker, so premiums would rise substantially.  These large premium hikes would lead some healthier people to go without insurance, which would raise premiums still higher and further discourage healthier people from keeping their coverage.

Because insurers have already submitted their premium rates for the plans they will offer in 2014, on the assumption that the individual mandate will be in effect, a one-year delay would risk severely disrupting the start of the new exchanges.  If the individual mandate were delayed this fall, insurers would immediately ask for significant time to recalculate the higher premiums they would need to charge to take the mandate delay into account.  That would likely suspend the open-enrollment period that started on October 1 and potentially push back the January 1, 2014 start for when exchange coverage will be effective.  Individuals and families seeking to purchase coverage through the exchanges would have to wait longer to enroll in exchange plans and obtain coverage.  The delay in the individual mandate would also similarly affect plans offered in the individual market outside of the exchange.

Delaying the individual mandate for one year would undermine health reform just as the major coverage expansions are set to take effect in 2014.  Millions more people would remain uninsured.  It would also drive up premiums sharply in the reformed individual market inside and outside the new exchanges, as well as disrupt exchange operations in the middle of the open enrollment season.  Policymakers should firmly reject any a delay .

[4] The estimate range is the result of differing assumptions about overall participation in the exchanges and among people with low and modest incomes who are eligible for premium subsidies to purchase exchange coverage.  Matthew Buettgens and Caitlin Carroll, “Eliminating the Individual Mandate: Effects on Premiums, Coverage, and Uncompensated Care,” Urban Institute, January 2012, http://www.urban.org/UploadedPDF/412480-Eliminating-the-Individual-Mandate.pdf.

[6] Christine Eibner and Carter Price, “The Effect of the Affordable Care Act on Enrollment and Premiums, With and Without the Individual Mandate,” RAND Corporation, 2012, http://www.rand.org/content/dam/rand/pubs/technical_reports/2012/RAND_TR1221.pdf.