A recent study on how the Temporary Assistance for Needy Families (TANF) program responded to increased need during the Great Recession, by Ron Haskins and Kimberly Howard of the Brookings Institution and Vicky Albert of the University of Nevada, asserts that “TANF was more responsive to the recession than critics have claimed.”  It concludes that TANF responded in the majority of states as a good safety net program would.[1]  These conclusions, however, are off the mark as they rest on seriously flawed analysis.  When the flaws are addressed, the results lead to the opposite conclusion.

A premise of the study is that other researchers’ analyses of TANF’s responsiveness are faulty because they do not account for state differences in the timing and severity of the recent recession.  Haskins, Howard, and Albert examine changes in state TANF caseloads using two different measures (or methodologies).  One measure examines caseload changes in each state over the state’s period of rising unemployment; the other measure examines each state’s caseload change from its lowest point during the period of rising unemployment in the state to its highest point, through December 2011.  The second measure is designed to yield the largest possible increase in a state’s TANF caseload.  For both measures, the period of rising unemployment is determined by looking at unemployment in the state from December 2006 (one year before the start of the start of the national recession) through June 2011 (two years after the end of the national recession).

Using the first of these measures, the authors find the TANF caseload increased by 12 percent in the average state, which is almost identical to the estimate we earlier produced of a 13 percent increase nationally.[2]  Not surprisingly, the second measure produces a larger estimate of responsiveness — an increase of 30 percent in the TANF caseload in the average state; the authors use that measure to draw their main conclusions.

The principal problem with the authors’ analysis is not with this measure itself, but in how they use and interpret its results.  Using the second measure (the one that produces the larger caseload-gain figures), the authors classify states into four groups:  generous (seven states), responsive (18 states), status quo (19 states), and unresponsive (seven states).  The authors conclude that in the 19 “status quo” states — where the average TANF caseload increased by an average of 14 percent — the response was “acceptable” because the increase in the unemployment rate was “modest” as well.  This is a striking interpretation and conclusion — because the unemployment rate in those states increased by an average of 98 percent, hardly a modest rise and certainly not one from which we would expect only a modest response for a basic safety-net program like TANF.  In defining this as an acceptable response from TANF, the authors set an extremely low bar for what should be expected of TANF during hard economic times. 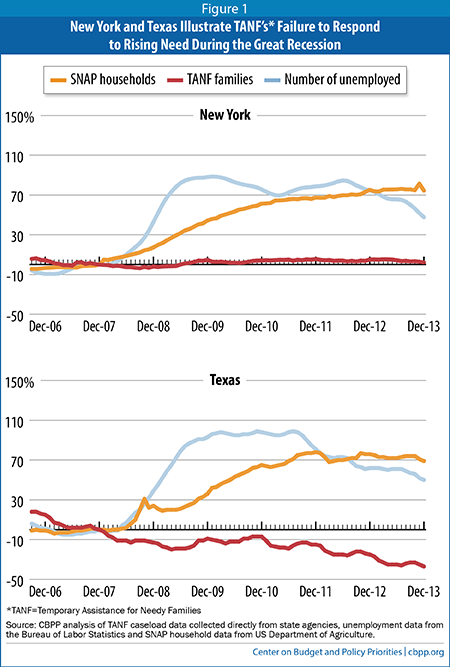 Figure 1 illustrates the problem with this approach.  It depicts the experiences of New York and Texas, the two largest of the “status quo” states, which (as noted) the authors say demonstrate that TANF responded as it should be expected to.  As the figure shows, the TANF caseload rose only marginally in New York, and rose for only a short time in Texas before falling significantly below where it was at the start of the national recession.  In contrast, the caseloads in the Supplemental Nutrition Assistance Program (SNAP, formerly known as the food stamp program) responded quickly and over a sustained period.  The contrast is stark.

Moreover, the authors claim that TANF responded to a greater degree in the 2000 and 2007 recessions than the Aid to Families with Dependent Children program (AFDC), TANF’s predecessor, did in previous recessions.  This claim falls apart under scrutiny, however, because it rests on inappropriate use of data.  The authors arrive at this conclusion by averaging the percentage increase (or decrease) in the AFDC caseload during the 1980, 1981, and 1990 recessions and comparing that to the average percentage change in the TANF caseload during the 2000 and 2007 recessions.  There are three major flaws in this part of the analysis.

We have monitored the rise and fall of TANF caseloads since the start of the recession.  While we agree that it’s important to look at how each state responded to the recession, as well as to national trends, we have a far less sanguine assessment of the program’s responsiveness to the recent recession than Haskins, Howard, and Albert do.  In contrast to their claim that TANF responded reasonably to the large increase in need in the recent recession, we find that it fell well short of how we would expect such a basic safety net program to respond during tough economic times.  We conclude that:

In spite of its shortcomings, TANF is often held up as a model for altering other safety net programs.  The Haskins, Howard, and Albert study is likely to be cited as evidence that TANF performs fine in recessions, so other programs (such as SNAP) can be changed to a similar block-grant structure.  But that would be a highly inappropriate conclusion based on flawed use of data.

The three authors note that the safety net as a whole performed well during the Great Recession and prevented millions of people from falling into poverty, a point with which we concur.  But TANF’s role in that safety net was only a very small one, and it would have been even smaller if President Obama and Congress had not provided additional TANF funds to states through the 2009 Recovery Act, which no one should count on future Congresses to replicate in a future recession.  If the rest of the safety net had performed as poorly as TANF did, the level of hardship that the Great Recession caused would have been (and would continue to be) far greater than it was.

[1] Ron Haskins, Vicky Albert and Kimberly Howard, “The Responsiveness of the Temporary Assistance for Needy Families Program During the Great Recession,” The Brookings Institution, August 12, 2014, http://www.brookings.edu/research/papers/2014/08/responsiveness-tanf-great-recessions-haskins.

[3] According to the authors’ calculations, the AFDC caseload decreased by 8.2 percent during this recession.