| By Robert Greenstein and Richard Kogan

The Republican Study Committee, a group of conservative members of the House of Representatives, has proposed to establish an “entitlement cap” that limits total expenditures for entitlement programs other than Social Security and requires projected expenditures for such programs to be cut $1.8 trillion over the next ten years.  This proposal is part of its “Contract with America Renewed,” issued March 8, 2006.[1]  The proposed entitlement cap could become part of budget-process legislation being discussed by the House Budget Committee majority and the House majority leadership, or it could be offered as an amendment to that legislation. 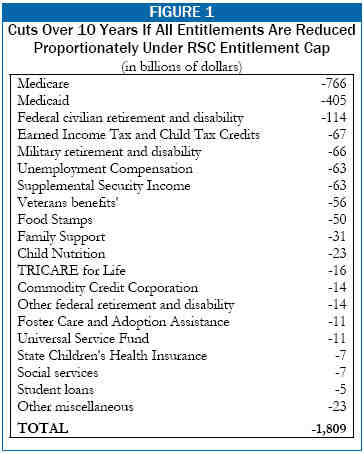 Similarly, the Paralyzed Veterans of America wrote in a letter to Members of Congress on June 22, 2004, “PVA would also like to urge you to oppose any proposed amendment that would enact caps on entitlement spending.”  In a strong letter sent on June 21, 2004, the AARP stated, “AARP urges you to reject any entitlement caps because they would jeopardize the health and economic security of millions of vulnerable Americans.”

The required entitlement cuts would not be especially deep in the first year, but their severity would grow rapidly thereafter.  By 2011, entitlements other than Social Security would have to be cut almost 14 percent on average and the cuts would cumulate to $408 billion over the five-year period 2007-2011.  The depth of the cuts would continue to grow forever.  By 2016, the entitlement cuts would average more than 24 percent — reaching $416 billion in that year alone — and would total $1.8 trillion over the ten-year period.

The costs of Medicare and Medicaid rise with increases in the cost of health care.  As is well known, health care costs are rising rapidly in the private and public sectors alike.  The RSC entitlement cap, however, assumes that Medicare and Medicaid costs per beneficiary will rise an average of only 2.2 percent per year over the coming decade, the projected rate of increase in the Consumer Price Index.

Hardly any employer in America can hold increases in health insurance premium costs to 2.2 percent per beneficiary per year; basic health care costs are climbing much faster than that.  Mostly for this reason, the RSC entitlement cap would be set $1.8 trillion below projected entitlement costs.  As a consequence, not only Medicare and Medicaid but all entitlements other than Social Security would be at risk of deep cuts.

The budget plan released by the Republican Study Committee on March 8 contains cuts in a number of entitlement programs.  These include Medicare cuts of $218 billion over five years, which the RSC says could be  achieved through some combination of such options as doubling the Medicare Part B premium, raising Medicare deductibles and co-payments, and setting payments to hospitals, home health agencies, and skilled nursing facilities at levels that fall farther behind health care inflation with each passing year.

The RSC budget also would replace Medicaid with a block grant that does not keep pace with health care costs and that would lower projected federal Medicaid payments to states by $92 billion over five years.  Some of the other entitlement reduction proposals in the RSC budget would eliminate student loans for graduate students, eliminate the trade adjustment assistance programs, and cut farm programs substantially.

It is unthinkable, however, that the bulk of the cuts would occur through automatic cuts; the automatic cuts are designed to be so unpalatable that Congress and the President would be compelled to enact legislation cutting entitlements in order to avert or minimize the automatic cuts.  Indeed, if all of the reductions needed to comply with the RSC entitlement cap were made through the automatic cuts, then the programs that would be fully subject to the automatic cuts — including  farm-price supports, crop insurance, extended unemployment benefits, trade adjustment assistance, the Earned Income Tax Credit, vocational rehabilitation, child care payments to states, and the Social Services Block Grant (Title XX) — as well as the salaries of Member of Congress and Senators — would be entirely eliminated by 2013.

It is inconceivable that Congress would sit idly by and allow these programs — and Members’ own salaries — to be eliminated.  Congress clearly would seek to spread the pain more broadly, by enacting legislation that cut more heavily into entitlement programs that have some protection from the automatic cuts, such as Medicare and Medicaid.

[2] The proposal treats interest payments on the federal debt as an entitlement, and therefore subject to the proposed entitlement caps.  CBO data show that the combined cost of entitlements and interest would be $2.1 trillion over the caps in the ten-year period through 2016.  By cutting entitlements $1.8 trillion, the deficits and debt would be lower than projected, and $0.3 trillion in interest payments would be saved, producing the required total savings of $2.1 trillion.  This explains why entitlements themselves would have to be cut $1.8 trillion to adhere to the caps.  Our analysis is based on the legislative text of HR 2290, which Rep. Hensarling (the chairman of the RSC task force on budget and spending) introduced in 2005.  The RSC has not introduced legislative text to accompany the new “Contract” but their document refers to HR 2290.