Myths and Realities About the Alternative Minimum Tax

The Alternative Minimum Tax was created in 1969 to ensure that the highest-income households could not exploit loopholes, exclusions, and deductions to avoid paying any federal income tax.  The AMT acts as a stop-gap tax system, with taxpayers owing their regular income tax or AMT liability, whichever is higher.

Because the AMT parameters were never indexed for inflation, and because the 2001 and 2003 tax cuts substantially lowered taxpayers’ liability under the regular income tax without changing the structure of the AMT, the tax will affect a rapidly increasing number of taxpayers in future years in the unlikely event that no changes are made.  As a result, there is considerable anxiety surrounding the AMT, and some in Congress are eager to do away with it altogether.  Repealing the AMT, however, would cost at least $800 billion over the next decade (2008-2017), and as much as $1.5 trillion, depending on whether the 2001 and 2003 tax cuts are extended (according to estimates by the Urban Institute-Brookings Institution Tax Policy Center).  Repeal of the AMT would cost more than repeal of the estate tax.

Public discussion of issues surrounding the AMT suffers from several misconceptions, which seem to be widespread among policymakers and many media outlets.

Myth 1: The AMT is (or is rapidly becoming) a “middle-class” tax.

“What started out as a misguided attempt to tax the ‘rich’ has become a significant added tax burden on millions of middle-income Americans.” —  Senator Jon Kyl, May 23, 2005

Reality:  The bulk of AMT revenue continues to come from high-income households.

The Urban Institute-Brookings Institution Tax Policy Center estimates that, under current law (that is, in the unlikely event that Congress takes no action to restrict the AMT’s reach and the AMT grows to affect tens of millions of additional taxpayers), more than half of AMT revenue in 2010 still will come from households with incomes over $200,000 (the highest income 4 percent of all households).  About 90 percent of AMT revenue will come from households with incomes above $100,000 (the highest-income 16 percent of all households).  (See Figure 1.)

Knowing who pays the AMT is necessary to understanding who would benefit from repealing it.  Because households with annual incomes above $200,000 are the source of more than half of all AMT revenue, more than half of the benefits of repeal would go to these high-income households.

Furthermore, even assuming Congress does not repeal the AMT, it will almost certainly act to prevent the tax from affecting growing numbers of middle-income households.  To date, Congress has provided relief from the AMT in the form of temporary increases in the AMT exemption.  If this relief is extended, nearly all AMT revenue in 2010 will come from households with incomes above $200,000.  Thus, nearly all of the benefits of going beyond the current AMT “patch” and repealing the AMT would go to these very high-income households.

Myth 2: The growth in the AMT was unanticipated and accidental, and so the cost of repeal should not have to be offset.

“It’s ridiculous to rely on revenue that was never supposed to be collected in the first place.  Another trap is raising taxes to ‘pay’ for AMT repeal.  It’s unfair to raise taxes to repeal something with serious unintended consequences like the AMT.”  —  Senator Charles Grassley, January 4, 2007 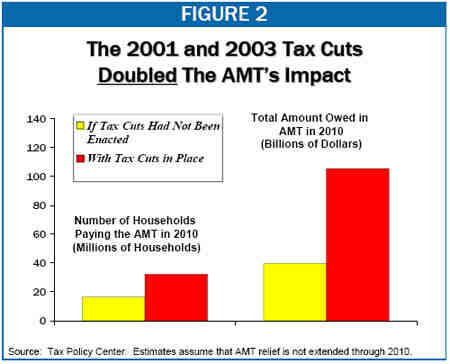 These effects should come as no surprise to supporters of the 2001 and 2003 tax cuts, who used the AMT to mask the true cost of those tax cuts.  In the spring of 2001, when Congressional leaders were formulating their large tax-cut package, they faced a major obstacle.  The Congressional Budget Resolution allowed for tax-cut legislation costing up to $1.35 trillion over ten years.  The combined cost of all tax cuts on the Administration and the Congressional leadership’s agenda, however, was far higher than that.  Former Representative Bill Thomas, then Chairman of the House Ways and Means Committee, described the “problem” as a need to get “a pound and a half of sugar into a one-pound bag.”[2]

The Congressional leadership accomplished this goal by employing three major gimmicks, all designed to conceal the true long-run cost of their tax package.  First, they phased in some of their tax cuts (for example, repeal of the estate tax) over time so that the full costs of these provisions did not show up until the end of the ten-year budget window.  Second, they sunsetted all of the tax cuts at the end of 2010, significantly reducing their cost in fiscal year 2011 (the last year of the budget window)[3]. Finally, they used the AMT to dramatically reduce the tax cuts’ official cost.

This point is well understood by tax experts, and it was brought to the attention of members of Congress in the spring of 2001, when the Joint Committee on Taxation provided lawmakers with estimates of how the tax cuts then under consideration would impact the AMT.  These estimates showed that the new tax cuts would double the number of AMT taxpayers by 2010.[5]

Policymakers could have chosen to act on the information the Joint Tax Committee provided, reforming the AMT so that it did not affect rapidly increasing numbers of households and so that households would receive the full value of whatever new tax cuts were enacted.  But, because the Congressional Budget Resolution set a limit for the total cost of the 2001 tax cut, providing a meaningful AMT fix would have required scaling back other tax cuts under consideration (such as the large reductions in the top marginal income-tax rates).

Instead, Congress chose to enact a vastly cheaper ($14 billion) three-year AMT “patch” (a temporary increase in the exemption level) in order to maximize the size of the other tax cuts.  The patch was enough to make sure that the number of AMT taxpayers did not immediately explode and that most people received the full value of their 2001 tax cuts — but only through 2004.

Had Congress then actually allowed the AMT patch to expire at the end of 2004, the AMT would have taken back a substantial fraction of the 2001 tax cuts in subsequent years.  The official cost estimates for the 2001 tax cuts assumed that this would occur, and so they omitted the cost of the portion of the tax cuts that would be taken back by the AMT.  As a result, the tax cuts appeared much cheaper than they otherwise would have.

In reality, however, Congress did not allow the AMT patch to expire, but extended it through the end of 2006 (at a cost of about $80 billion).  The Congressional Budget Office now estimates that continuing the policy of “patching” the AMT would have an annual cost of about $70 billion by 2010.  More than sixty percent of that cost simply represents the deferred cost of the enacted 2001 and 2003 tax cuts.

Myth 3: The only way to protect middle-class households from the AMT is to repeal it.

“[The AMT] is a monster that really cannot be improved.  It cannot be made to work right.  It is time to draw the curtain on this monster.” —  Senate Finance Committee Chair Max Baucus, January 4, 2007

Reality: The AMT can be reformed — and in a revenue-neutral manner — so as to fully protect middle-class households from the tax.

As noted above, repealing the AMT would cost about $800 billion between 2008 and 2017, if all of the 2001 and 2003 tax cuts were allowed to expire, and $1.5 trillion, if all of these tax cuts were extended (according to estimates by the Tax Policy Center).  Over the long run, the revenue losses from AMT repeal dwarf even the cost of estate-tax repeal, another very expensive tax cut that many in Congress have rejected as unaffordable.[6]

Fortunately, various tax experts have suggested reform alternatives that would protect all or nearly all middle- and upper-middle class households from paying the AMT, while preserving the revenue from the tax.  More than half of the cost of repealing the AMT would, as described above, go for tax cuts for households with incomes above $200,000 (see Figure 3).  Thus, a fix that better targets relief toward middle-income households would be considerably less expensive than repeal, and its costs could be offset through any number of possible measures. 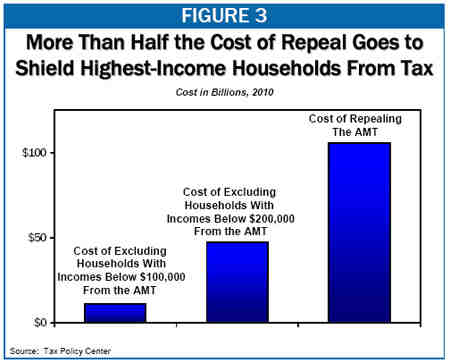 For example, one approach to AMT reform would be to extend the current AMT “patch” (the temporary higher AMT exemption level that expired at the end of 2006) and index it for inflation.  This reform would be better targeted than repeal toward middle-income taxpayers, although at least a fourth of the cost over the next few years still would go to provide tax cuts for households with incomes above $200,000.

Either of these approaches would be substantially less costly than repeal, though still expensive.  CBO estimates that continuing the current patch through 2017 would cost $569 billion between 2008 and 2017 if the 2001 and 2003 tax cuts are allowed to expire and more than $1 trillion if these tax cuts are extended.  The cost of an AMT exclusion for households with incomes below a certain level could be less (depending on the income level chosen), but would still be quite high.

The House of Representatives recently voted to reinstate the “Pay-As-You-Go” (PAYGO) budgeting rule, and Democratic leaders have promised that the Senate will follow suit.  Under PAYGO, the cost of legislation that increases entitlement spending or reduces revenues must be paid for.  Hence, PAYGO would require that the cost of any AMT fix be offset (unless the PAYGO rules were waived).

In addition, this reform likely would make the AMT more effective in combating tax shelters, its original purpose.  Many tax shelters involve reclassifying income as capital gains to take advantage of the lower capital gains tax rate. If capital gains income were taxed at the same rates as ordinary income under the AMT, the AMT would take back some of the benefits of these tax shelters and thus serve its purpose as a “stop-gap” for the regular income tax.[8]

Another option is to pay for AMT reform with a modest increase in the regular income tax rates levied on the highest-income taxpayers.  Such an increase would raise taxes only on those who have benefited the most from the income-tax cuts enacted in recent years.

Given the range of available options and the grave long-term budget problems the nation faces, it would be fiscally irresponsible to provide a costly windfall to high-income taxpayers in the form of AMT repeal.  Rather, if policymakers wish to address the AMT issue, they should enact an AMT reform plan that effectively targets relief to middle-class taxpayers and fully pays for the change in a progressive manner.

[3] For the 2001 tax-cut legislation to qualify as a reconciliation bill — which is not subject to filibuster in the Senate and thus can be passed with 51 votes instead of 60 votes — the tax cuts had to expire before the end of 2011.  (Senate rules prohibit provisions in reconciliation bills that would increase the deficit outside of the budget window, which in 2001 was 2001-2011.)  The sponsors of the legislation chose to sunset the tax cuts in 2010 rather than 2011 in order to squeeze more tax breaks into the bill and still stay within the budget resolution limit.