Affordable Care Act provisions requiring states to maintain their eligibility standards and procedures for Medicaid and the Children’s Health Insurance Program do not impede states’ efforts to ensure program integrity and reduce fraud, waste, and abuse, contrary to claims of House members who seek their repeal.  Moreover, repeal of the provisions, which the House Energy and Commerce Committee will consider this week, would raise the risk that many low-income children, seniors, people with disabilities, and others would lose their Medicaid coverage and end up uninsured.

But the MOE provisions do not affect any of the tools and initiatives that states (and the federal government, which jointly administers Medicaid) use to combat fraud and abuse.  Moreover, fraud and abuse in Medicaid are overwhelmingly due to actions by health care providers (or individuals posing as health care providers) — not low-income individuals and families that receive health care and long-term care services.  Nor do the MOE provisions affect another critical aspect of program integrity — efforts to identify and remedy Medicaid payment errors that do not involve fraud or abuse.

Misleading claims about the MOE provisions distract from the likely impact of their repeal.  Repeal would mean that states could sharply cut eligibility in their Medicaid programs and raise procedural barriers that make it more difficult for eligible individuals and families to apply for and remain enrolled in Medicaid.  As a result, many children, seniors, people with disabilities, and others could lose their Medicaid coverage and end up uninsured.[1]

States and the federal government currently use numerous tools and initiatives to prevent and investigate fraud in Medicaid and to recover misspent funds.  There is no credible claim or evidence that the MOE provisions affect these efforts, a number of which are described below.  In fact, anti-fraud activities have increased since the MOE provisions were enacted as part of the Affordable Care Act (ACA).

Nor do the MOE provisions interfere with ongoing state efforts to prevent and identify erroneous or improper payments (which do not necessarily constitute fraud or abuse) in Medicaid.  For example:

Providers, Not Individuals, Are the Main Source of Medicaid Fraud

Claims that the MOE provisions are hampering states’ anti-fraud efforts imply that a major element of Medicaid fraud and abuse is inappropriate enrollment of individuals and that states need greater leeway to tighten their eligibility procedures to fix the problem.  There is no evidence, however, of serious eligibility fraud.

An estimated 80 percent of health care fraud — in both public programs like Medicaid and Medicare and in private insurance — is committed by health care providers, not individuals, according to the National Health Care Fraud Association.  The most common types of provider fraud include billing for services that were not provided or for more expensive procedures than were actually performed, performing medically unnecessary services to generate insurance payments, and falsifying a patient’s diagnosis to justify services or procedures that are not medically necessary.

When individuals are involved in health care fraud, they frequently are unwitting participants — or even victims.  Perpetrators may steal Medicaid beneficiaries’ personal information, tamper with their medical records, or perform medically unnecessary and risky procedures as part of fraudulent schemes.[9]

Past Measurement of Eligibility Errors Was Flawed

Tracking eligibility errors is another important component of assuring program integrity in Medicaid, through PERM and other efforts.  Eligibility errors found through PERM typically arise from a lack of documentation in reviewed case files or caseworker errors, rather than from individuals providing false information to get benefits for which they are not eligible.[10]

When PERM reviews were first implemented, some states that had eased Medicaid documentation requirements for eligibility purposes had more errors.  This, however, was the result of a flaw in the PERM process itself, which initially required states to obtain extra documentation such as pay stubs for PERM eligibility reviews, even though some states did not require Medicaid beneficiaries to provide this type of documentation and the federal government does not require states to collect it.  Without the extra documentation, cases were counted as eligibility errors even when the individuals were eligible.  Legislative and regulatory corrections have addressed this issue.  Now states undergoing PERM reviews are measured on whether they made the correct policy decisions based on their own policies, procedures, and requirements for documentation, which must be consistent with federal law.

In the past, critics of the MOE provisions have cited a statistic that 20 percent of the people in Oregon’s Medicaid program were ineligible.  This figure recently appeared, for example, in a paper issued by House Energy and Commerce Committee Republicans in support of past legislation repealing the MOE provisions.  But this percentage is incorrect; it was based on miscalculations made during an FY 2008 PERM review of Oregon’s Medicaid program.  The state’s eligibility error rate was officially corrected to be 6.8 percent after the technical calculation errors were discovered.  Moreover, this lower figure does not mean that 6.8 percent of Medicaid beneficiaries in Oregon are not eligible.  It is an estimate of improper payments for Medicaid services in cases where issues were identified during the eligibility review.[11]

The health care reform law maintains existing eligibility levels in Medicaid until new, nationwide Medicaid eligibility standards take effect and health insurance exchanges begin operating in 2014.  It prohibits states from making changes to eligibility standards as well as to enrollment procedures.  If the MOE is repealed, states would be able to tighten their enrollment procedures by requiring extra paperwork and adopting other procedural barriers.  Experience shows that such changes would lead many individuals and families to lose coverage.  For example:

[1] Judith Solomon, “Repealing Health Reform’s Maintenance of Effort Provision Could Cause Millions of Children, Parents, Seniors, and People With Disabilities to Lose Coverage,” Center on Budget and Policy Priorities, February 24, 2011.

[2] U.S. Department of Health and Human Services and U.S. Department of Justice, “Health Care Fraud and Abuse Control Program Annual Report for Fiscal Year 2011,” February 2012.  Some of the transfers reported in fiscal year 2010 are the result of judgments, settlements and actions that occurred in prior years, and some actions in 2010 will result in future transfers.

[5] Center for Program Integrity, Centers for Medicare and Medicaid Services, “Annual Report to Congress on the Medicaid Integrity Program for Fiscal Year 2010,” 2011.

[9] Sara Rosenbaum, Testimony before the House Committee on Energy and Commerce Subcommittee on Oversight and Investigation, March 2, 2011.  See also, National Health Care Anti-Fraud Association, “The Problem of Health Care Fraud,” accessed at www.nhcaa.org on May 20, 2011.

[11] PERM error rates include both underpayments and overpayments, people being placed in the incorrect program, and (as noted previously) documentation problems even if no improper payment was made.  The main purpose of state error rates is to calculate a national error rate, and state rates may not be meaningful on their own.

[12] Only one other state, Tennessee, has retained any face-to-face interview requirement for children, and this is only for Medicaid enrollment (not for renewal, and not for CHIP).  See “Holding Steady, Looking Ahead: Annual Findings of a 50-State Survey of Eligibility Rules, Enrollment and Renewal Procedures, and Cost Sharing Practices in Medicaid and CHIP, 2010-2011,” Georgetown Center for Women and Families and the Kaiser Family Foundation, January 2011. 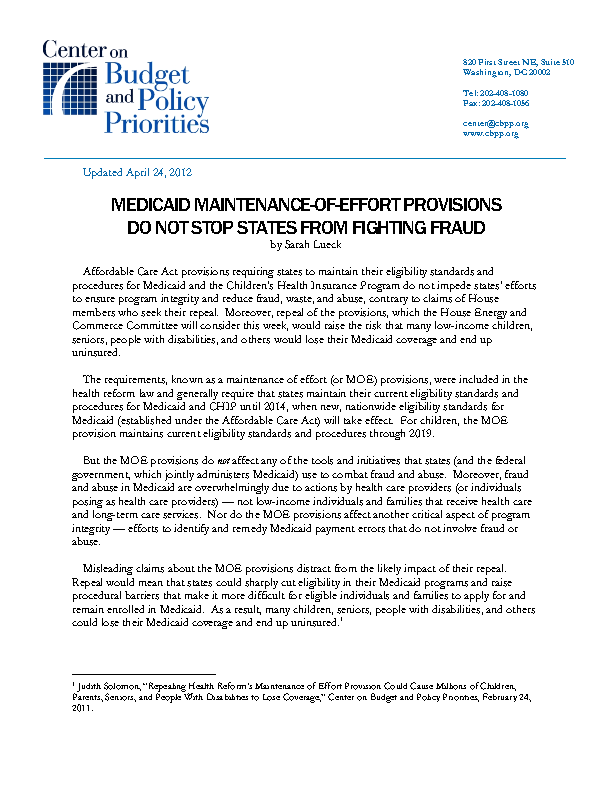