Lessons for Other States from Kansas' Massive Tax Cuts

| By Michael Leachman and Chris Mai

Tax cuts enacted in Kansas in 2012 were among the largest ever enacted by any state, and have since been held up by tax-cut proponents in other states as a model worth replicating.  In truth, Kansas is a cautionary tale, not a model.  As other states recover from the recent recession and turn toward the future, Kansas’ huge tax cuts have left that state’s schools and other public services stuck in the recession, and declining further — a serious threat to the state’s long-term economic vitality. Meanwhile, promises of immediate economic improvement have utterly failed to materialize.

As other states consider large tax cuts, they should heed these key lessons from Kansas:

Evidence from other states and academic studies casts further doubt on claims that the tax cuts will cause the state’s economy to boom.  States that cut taxes the most in the 1990s performed worse, on average, over the course of the next economic cycle than states that were more prudent.[2]  And the academic literature overwhelmingly finds that states with lower personal income taxes perform no better economically than their peers.[3]

Some tax-cut proponents claim that a state’s economy will respond so powerfully to tax cuts that the state will actually take in more revenue with the tax cuts than without them.  This claim has no backing in the serious economic literature, however.[4]  In truth, there’s no free lunch:  when states cut taxes, they lose revenue.  That’s certainly what has happened in Kansas.

In May 2012, Governor Brownback signed one the largest tax cuts, in percentage terms, ever enacted by a state in a single year.  It included dropping the top income tax rate by about one-fourth and eliminating income taxes entirely on business profits that are “passed through” from businesses to their owners.  (See text box for details.)  The state’s non-partisan Legislative Research Department estimates that Kansas received $803 million less revenue this year because of the 2012 tax cuts and that the cumulative revenue loss will exceed $5 billion by 2019.

In 2013 Kansas cut income tax rates again, setting itself on a path eventually to eliminate its income tax entirely — the stated goal of Governor Brownback and his legislative allies.  The 2013 changes also offset some of the near-term revenue loss from the 2012 tax cuts by raising other taxes somewhat.  (See text box.)

In 2013, the state passed legislation that:c 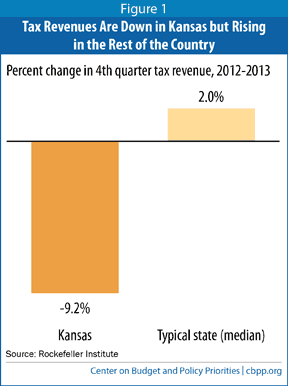 These two rounds of tax changes have left a large and growing hole in the state’s ability to fund schools and other public services.  (Before the tax cuts were enacted, Kansas’ personal income tax provided about 45 percent of the state’s general funds for education, health care and other services.)  Already the cuts have reduced general fund revenues by about 8 percent relative to what they otherwise would have been, and those costs will grow rapidly.  In five years the revenue loss will double to 16 percent, according to data from the Legislative Research Department,[5] at which point additional rate cuts likely would be required, deepening the revenue loss even more.  (See text box for details on how this would work.)

In most states, revenues are beginning to recover from the recent, severe recession.  In the fourth quarter of 2013, tax revenue was up in 38 states compared to a year earlier.  In the median state, the increase was 2.0 percent.[6]

Kansas, though, is headed in the other direction.  There, tax revenue was down 9.2 percent, primarily because of the tax cuts.  (See Figure 1.)  No other state but Alaska (where declining oil and gas production led to a steep drop in severance taxes) saw such a steep decline.

Because most states are seeing their revenues improve, they have been able to invest in schools and other public services after years of steep funding cuts.  But Kansas is in a much worse position. Because the tax cuts resulted in less revenue, Kansas is much less able to restore funding lost to its schools and other public services after the recession hit.

Unlike Most States, Kansas Is Still Cutting School Funding

High-quality schools are a crucial building block of economic growth.  They determine the quality of much of the state’s future workforce and shape the minds of future community leaders and entrepreneurs.  Deep cuts in funding for schools undermine school quality in part because they limit and stymie the ability of states to implement reforms that have been shown to result in better outcomes for students, including recruiting better teachers, reducing class sizes, and extending student learning time.

After the Great Recession deeply reduced their revenues, many states cut K-12 funding.  By the 2011-12 school year, 34 states were providing less general school funding per student than before the recession, after adjusting for inflation.  Schools nationwide eliminated over 300,000 K-12 teaching and other positions.[7]  In Kansas, the funding cuts were particularly deep:  14 percent per student.  Even prior to the recession, Kansas ranked slightly below the national average for school spending.[8]  Impacts of the cuts on Kansas were significant, including school closings and larger class sizes.[9]

Since then, with the economy slowly improving, most states have begun restoring some of the lost funding.  Last school year, 18 states raised general state funding per student, relative to inflation, and this year 29 states did so.  (Most states, though, still spend less per student than before the recession.)

Kansas, though, has continued to cut.  Over the last two school years, both of which were affected by the tax cuts, Kansas has cut general K-12 funding by another 2 percent per student. Governor Brownback’s proposed budget would cut funding by another 1.8 percent, leaving it 17 percent below pre-recession levels, adjusted for inflation.[10]  (See Figure 2.) 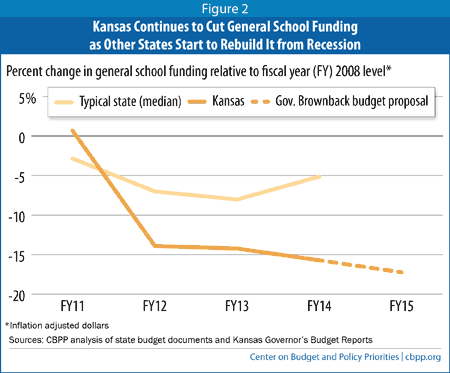 Besides schools, a range of other state services lay a foundation for a strong economy.  Colleges and universities, libraries, public health programs, courts, parks, and other services help produce an educated and healthy workforce and make neighborhoods safer and more livable — all important factors in attracting businesses and boosting long-term economic growth.

The recession deeply damaged Kansas’ ability to fund many of these services. And now, the massive tax cuts have caused funding for many of them to continue to decline.

Most state revenue systems require middle- and low-income families to pay larger shares of their incomes in taxes than high-income families — the exact opposite of what fairness might dictate. That’s true in Kansas, where the lowest income fifth of families pay 10.3 percent of their income in state and local taxes, on average, while the highest-income one percent of taxpayers pay just 3.9 percent.[17]  In this way, state and local tax systems exacerbate the country’s already high levels of income inequality.

A strong state income tax helps level the playing field.  Of the three major sources of state and local revenue — income, sales, and property taxes — only income taxes are typically structured to ask more of the highest income taxpayers than middle- or low-income ones.

Therefore, cutting income tax rates typically reduces taxes the most — as a share of income as well as in dollar terms — for the highest-income taxpayers.  It is possible, of course, to make tax changes in ways that are more even-handed, such as by enacting or expanding credits or exemptions that benefit all families.  But when the focus is income tax rates, the benefits mostly accrue to the wealthy.

That’s exactly what happened in Kansas:

At a time of historically high income inequality, Kansas’ income tax changes have further widened the gap between the wealthy and other residents.  From the late 1970s to the mid-2000s, incomes rose by 67 percent (after inflation) for the richest fifth of Kansas households but by just 12 percent for the poorest fifth.  Cutting taxes for the wealthy and raising them for the lowest-income households only makes these trends worse.[18]

In signing the 2012 tax package, Governor Brownback likened it to “a shot of adrenaline into the heart of the Kansas economy.”[19]  Proponents of similar tax cuts in other states have similar hopes.  So far, however, the Kansas tax cuts haven’t produced the promised economic benefits.

Kansas’ Job Growth Below Other States’

Unemployment in Kansas remains relatively low, as it has been since the recession hit, and fell further in 2013, in line with a decline nationally.  While most of the decline resulted from the state’s modest job growth, part of it was due to a drop in the number of people looking for work. Kansas’ labor force (people either employed or actively seeking work) has actually shrunk by 6,800 since the tax cuts took effect at the beginning of 2013.

Farmers did well in Kansas in 2013 compared to the previous year, when a major drought depressed farm income.  But personal incomes outside of farming rose by just 0.1 percent above inflation, slightly less than the 0.2 percent growth nationally.  Before the tax cuts took effect in 2012, by contrast, nonfarm personal income in Kansas grew 2.7 percent, a stronger pace, though still slower than growth nationally.[23]

Business Growth Has Been Unimpressive

Governor Brownback and others claim that small business growth has hit record highs since the tax cuts took effect, citing figures from the Kansas Secretary of State on the number of in-state businesses filing incorporation papers.[24]  But, while more than 15,000 new businesses were incorporated in Kansas in 2013, more than 16,000 other businesses were either dissolved by their owners or forfeited for failure to file an annual report and pay the annual fee.  Even adding in the 4,500 businesses that owners reinstated that year (by filing annual reports after letting their status lapse), the net growth in registered businesses was about 3,600 — smaller than in 2012, the year before the tax cuts took effect, and little over half the pre-recession (2006) level.

In addition, Bureau of Labor Statistics data show that Kansas’ share of all U.S. business establishments — individual stores, factories, offices, and the like — fell in 2012, the year the tax cuts were enacted, and then slid slightly further over the first three quarters of 2013.[25] (Data aren’t yet available for the last part of the year.)  All four of Kansas’ immediate neighbors outpaced Kansas in the first three quarters of 2013.

No one knows how well Kansas’ economy will perform over the next several years, but the available evidence doesn’t bode particularly well.

The Kansas Division of the Budget projects that Kansas will grow relatively slowly over the next two years:[26] 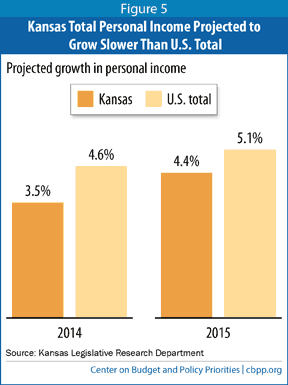 States considering deep tax cuts in hopes of sparking a surge of economic growth should look carefully at Kansas.  That state’s massive tax cuts have created a large and growing revenue loss and forced further cuts in funding for schools and other public services that the state had already cut because of the recession.  The tax plan also has widened inequality and raised taxes on the lowest-income families.  Finally, a year after the cuts first took effect, the state’s economy is not performing particularly well, and there’s no evidence to suggest that the tax cuts will cause the economy to take off in the years ahead.

[10] A recent Kansas Supreme Court ruling in Luke Gannon v. State of Kansas found that the state is unconstitutionally underfunding lower-income schools.  The ruling may compel the state’s legislature to increase funding for these schools, or shift funding to these schools from other, wealthier ones.  Supreme Court ruling available at http://www.kscourts.org/Cases-and-Opinions/opinions/SupCt/2014/20140307/109335.pdf.

[11] CBPP analysis of data from Illinois State University’s Grapevine report and the Kansas Board of Regents.

[17] Based on permanent Kansas law for non-elderly taxpayers as of January 3, 2013, at 2010 income levels, including the tax savings from federal itemized deductions for state and local taxes, also known as the “federal offset.” Institute on Taxation and Economic Policy, Who Pays? A Distributional Analysis of the Tax Systems in All 50 States, 4th edition, January 2013.

[21] Data from Bureau of Labor Statistics.