The debt limit deal enacted on August 2 calls for about $900 billion in cuts in discretionary programs over the next decade and would impose further automatic, across-the-board spending cuts in many programs if Congress fails to enact an additional $1.2 trillion in deficit-reduction measures by January 15, 2012. Those across-the-board cuts would first take effect in January 2013, a year later than many people have mistakenly believed, and would represent approximately a 9 percent annual cut in affected non-defense programs, along with roughly a 9 percent cut in defense programs in 2013. (Reports that the percentage cut would be significantly higher in defense than in affected non-defense programs also are mistaken.) This report outlines how the 2013 cuts would occur. Cuts would also occur in the next eight years, 2014-2021.

Background: Main Elements of the Legislation

The Joint Committee can recommend any kind of deficit-reduction measures it wants: further cuts in the new discretionary caps, cuts in any entitlement program, and tax increases of any kind. There may be severe political constraints, but there are no legal constraints, contrary to what some congressional leaders are claiming.[1]

The debt limit increases whether or not Congress enacts the Joint Committee's bill or approves the Constitutional Balanced Budget Amendment. [2] Also, congressional approval of the Constitutional Balanced Budget Amendment would not eliminate the automatic sequestration that would occur if Congress fails to meet the $1.2 trillion target for additional savings.

How the 2013 Sequestration Would Work

If the Joint Committee process results in the enactment of less than $1.2 trillion in deficit reduction through 2021, the sequestration would generate sufficient savings to reach a total of $1.2 trillion over that period. (These budget cuts are in addition to the $900 billion in cuts generated by the enactment of discretionary caps as part of the Budget Control Act). If Congress enacts no deficit reduction, the sequestration would therefore be $1.2 trillion through 2021. For simplicity, we assume that result.

The $38.6 billion reduction in the non-defense discretionary caps would shrink from year to year, to $33 billion by 2021, because the mandatory cuts would grow and thus would account for somewhat more each year of the $54.7 billion in total non-defense cuts.

Our calculations show that a non-defense sequestration of $54.7 billion in 2013 would result in cuts of approximately 9.3 percent in non-exempt discretionary programs and 8.3 percent in non-exempt mandatory programs, as well as the 2 percent maximum cut in Medicare provider payments the law allows. A defense sequestration of $54.7 billion also would represent a cut of about 9.0 percent in defense programs, including war funding and unobligated balances, if military personnel funding is exempt from sequestration, and about a 7 percent cut if it is not exempt.

This memorandum and Table 1 show the automatic cuts that would occur if the Joint Select Committee process achieves no savings. As noted, if that process achieves some but not all of the targeted $1.2 trillion in savings, the dollar and percentage sequestrations would accordingly be smaller than shown in the table. Figure 1 below shows how the percentage cuts rise from zero up to the levels shown in the table as the Joint Committee shortfall grows. 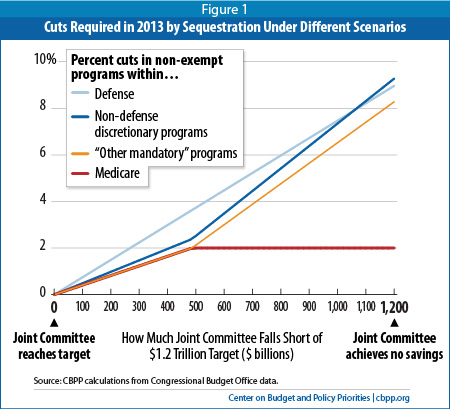 Of note, using CBO estimates of sequestrable mandatory programs, we calculate that the overall mandatory cut reaches 2 percent – after which the Medicare cut does not grow – when the Joint Committee falls short of its $1.2 trillion target by $486 billion, i.e., if it achieves no more than $714 billion in savings, counting interest.

Shown another way, Figure 2 on page 6 illustrates the percentage cuts in each program category under four possible outcomes of the Joint Committee's deliberations.

Why Our 2013 Figures Differ from CBO's

We use CBO's estimates of 2013 mandatory funding that is subject to sequestration, from CBO's September 12 report, op cit. Nevertheless, in that report CBO portrays different percentage cuts from those in the table on page 4. CBO treats the 2013 sequestration base as though it were the $546 billion cap level for defense and the $501 billion cap level for non-defense discretionary programs; CBO does not take into account funding outside the caps that is subject to sequestration (war funding and defense unobligated balances) or funding within the caps that is exempt from sequestration (VA medical care, Pell grants, and potentially Military Personnel) or subject to a 2% limit (health centers and Indian health). In effect, CBO portrays the 2013 reductions as though they were the effect of cap reductions rather than sequestration of actual appropriations bills. This allows CBO's 2013 figures to be comparable to it 2014-2021 figures, which are in fact required by the Act to be cap reductions, but it oversimplifies the likely 2013 effects on non-exempt programs if they are funded at plausible levels.

[2] The debt limit increase would be $2.4 trillion rather than $2.1 trillion if Congress approves the Balanced Budget Amendment or if the Joint Committee's bill saves at least $1.5 trillion through 2021 and is enacted.

[3] In a recent memorandum, the Congressional Budget Office estimates that a sequestration of the size assumed in this report would actually reduce interest payments by $169 billion over ten years; CBO assumes lower interest rates than the drafters of the budget deal. See Estimated Impact of Automatic Budget Enforcement Procedures Specified in the Budget Control Act, CBO, September 12, 2011, at http://www.cbo.gov/ftpdocs/124xx/doc12414/09-12-BudgetControlAct.pdf .

[4] The exemptions occur because the Budget Control Act is drafted as a portion of the Balanced Budget and Emergency Deficit Control of Act of 1985 (BBEDCA), which contains a list of exemptions in section 255 and a list of special rules in section 256. Those two provisions of BBEDCA were most recently updated by the Statutory PAYGO Act of 2010, and are not changed in any way by the Budget Control Act.

[5] While not exempt from sequestration, funding for community and migrant health centers and for Indian health services and facilities cannot be cut more than 2 percent. For non-defense appropriations, "new funding" means new budget authority and includes advance appropriations that first become available for obligation in 2013. The term does not include unobligated balances carried over from prior years. If a part-year "continuing resolution" is in place at the time of the January 2013 sequestration, the sequestration is calculated as though that legislation extended for the entire fiscal year, and the cuts continue to apply when the temporary continuing resolution is replaced by year-long funding.