Congress Should Restore Vouchers in 2015 Bill

Following the sequestration funding cuts in 2013, most state and local housing agencies had no choice but to sharply reduce the number of families receiving housing vouchers.[1]  By December 2013, agencies were assisting about 70,000 fewer families than they had a year earlier, and the cuts continued to deepen during the first half of 2014: by June, agencies were assisting approximately 100,000 fewer families.[2]  (See Figure 1.)

There is evidence that housing agencies are restoring some vouchers to use in the final months of 2014.  Congress should support these efforts to reverse the harmful effects of sequestration by increasing funding for housing vouchers in the final 2015 funding bill for the Department of Housing and Urban Development (HUD).

The sequestration cuts have come at a particularly bad time.  The number of renter households paying unaffordable housing costs is at historic highs, according to a recent report by Harvard’s Joint Center for Housing Studies, which warns that the “spread of severe cost burdens [where renters pay more than half their income for housing] during the Great Recession and its aftermath is particularly alarming.”[3]  The vast majority of renter households with severe housing cost burdens have low incomes.  Yet, because of inadequate funding, only 1 in 4 eligible low-income households receives housing vouchers or other federal rental assistance.

While some progress has been made in reducing homelessness, it remains widespread.  Close to 600,000 Americans, including some 50,000 veterans and 136,000 children, are living in emergency shelters or on the street on any given day, according to HUD’s latest count.[4]  In addition, more than 1 million school-aged children and their families live in temporary motels or doubled-up with other families, according to the latest Department of Education surveys.[5]  Housing instability and homelessness can have a debilitating impact on children over the long term.[6]

Research shows that vouchers are effective at reducing homelessness.[7]  Local communities have made progress in reducing homelessness among veterans and people with significant disabilities who experience long-term or repeated homelessness: veterans’ homelessness has fallen by 33 percent since 2010, while chronic homelessness has fallen by 30 percent since 2007.[8]  These gains reflect, in significant part, targeted investments in housing vouchers — including, but not limited to, vouchers funded through a veterans’ supportive housing program that HUD and the Department of Veterans Affairs administer jointly.  In communities such as Los Angeles, Phoenix, and Philadelphia, where housing agencies have dedicated housing vouchers to support local efforts to reduce homelessness, restoring vouchers cut under sequestration is essential to making further progress on this goal.[9] 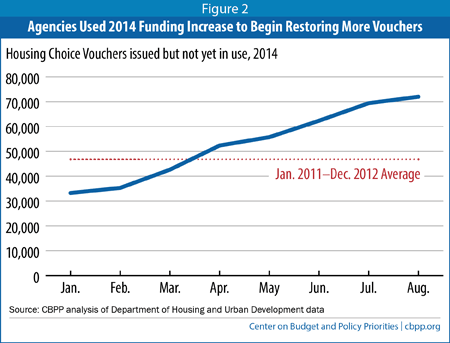 Agencies Poised to Restore Some Lost Vouchers This Year

Two factors have made the loss of vouchers caused by sequestration somewhat smaller than it otherwise would be.  First, many housing agencies drew on funding reserves to partly offset the funding cuts and cushion the impact on low-income families.  Agencies were thus able to avoid terminating assistance for thousands of families already using vouchers, although they continued to reduce the number of families assisted by not reissuing vouchers that became available when other families left the program.[10]  Second, Congress provided sufficient voucher funding in 2014 to enable agencies to stem cuts in the number of families assisted and restore a modest share of the vouchers lost under sequestration.

While the reductions in assistance deepened during the first seven months of 2014, evidence suggests that many housing agencies are poised to restore some vouchers during the final months of this year.  Soon after receiving revised funding allocations in March 2014, agencies began to issue more unused vouchers to families on waiting lists, according to HUD data.  For example, state and local agencies in Maine reported having 492 “vouchers on the street” — that is, vouchers that had been issued to families but were not yet leased — in July, more than twice the number they had six months earlier.  Moreover, by October, these agencies were assisting 116 more families than they had in July (a 1 percent gain, which is large for a three-month period).

Nationally, the number of “vouchers on the street” climbed in June, July, and August, with agencies reporting that approximately 70,000 families were seeking rentals with vouchers in hand.  That’s about 25,000 more than the monthly average for the two years prior to sequestration.  While it is hard to predict precisely how many of these families will succeed in using their vouchers to rent housing, we estimate that between 20,000 and 40,000 more families will likely be using vouchers in December 2014 than in July, and agencies could be assisting tens of thousands of additional families in the early months of 2015, before HUD notifies agencies of their funding level for the year.

Congress Should Continue Progress in Restoring Lost Vouchers in 2015

Housing agencies are relying on the increased funding provided in 2014 to restore some vouchers to use.  It is essential that Congress provide sufficient funds in 2015 for agencies to renew all of the vouchers issued in 2014 and to make further progress in reversing the cuts that sequestration caused.  To achieve this goal, Congress should fund vouchers at least at the level in the Transportation-HUD bill that the Senate Appropriations Committee approved in June:  $17.7 billion for voucher renewals and $19.6 billion total for housing vouchers, including funding for administrative costs and other line items.[11]  (While the House bill also includes $17.7 billion to renew vouchers, it provides $205 million less for administrative expenses than the Senate bill does; housing agencies urgently need the additional administrative funds included in the Senate bill to do the work required to assist more families, such as verifying applicants’ incomes and inspecting housing units to ensure that they meet federal quality standards.)

If Congress fails to provide these funds — for instance, if it freezes funding for voucher renewals in 2015 at the 2014 level (as might be the case, for example, under a year-long continuing resolution) — it could compel some agencies to retreat from their recent progress and effectively lock in most of the voucher cuts implemented through mid-2014.  We estimate that flat renewal funding would fail to fund up to 85,000 of the 100,000 vouchers lost to sequestration.[12]

If Congress provides funds at or near the Senate-bill level, it will face important choices regarding how HUD should allocate voucher renewal funds in 2015.  Under the generally effective funding policy in place since 2007 (the “recent-cost formula”), agencies’ renewal funding eligibility in 2015 will be based on their average voucher usage and costs during calendar year 2014.  Within this basic framework, Congress will have several options, each with advantages and disadvantages:

[1] As the 2011 Budget Control Act requires, the Office of Management and Budget implemented across-the-board sequestration cuts in March 2013.  This reduced funding for Housing Choice Vouchers by $938 million, including some $858 million for the renewal of vouchers then in use — equivalent to funding for some 110,000 vouchers.

[2] CBPP estimates from HUD data.  The estimates do not include more than 40,000 new “tenant-protection” vouchers and veterans’ supportive housing (VASH) vouchers that HUD has awarded to state and local housing agencies, and agencies have issued to families, since December 2012.  HUD issues tenant-protection vouchers to replace public or other assisted housing that has been demolished or eliminated for other reasons; our analysis of sequestration’s impact does not include these vouchers because they do not represent a net gain in the number of families receiving assistance.  We also did not count new VASH vouchers, as Congress excluded VASH vouchers from sequestration.

[9] It is also important to increase funding for the Homeless Assistance Grants program, which provides grants to local agencies to provide financial and other types of assistance to prevent homelessness, as well as to assist homeless individuals and families in renting affordable homes.

[10] Congress set aside $103 million in voucher renewal funds in 2013 for adjustments to agencies’ allocations, including increases required to prevent terminations of families’ assistance.  HUD’s effective distribution of the funds played a significant role in avoiding terminations.

[11] The Senate bill raises voucher renewal funding by $353 million (2 percent) over the 2014 level.  Approximately $225 million of this amount will be required to renew some 28,000 new tenant-protection and VASH vouchers for which Congress provided first-year funding in 2014.  The remaining $128 million would provide agencies with a 0.7 percent increase to help cover rising per-voucher costs due to increased rent and utility costs in the private market.  This adjustment will likely be well below inflation in private rental costs, which have been growing at close to a 3 percent rate, according to the Consumer Price Index.  Therefore, the Senate bill will likely be sufficient neither to renew all the vouchers that Congress funded in 2014 nor to fully restore all vouchers lost due to sequestration.  But it will probably be sufficient to renew all vouchers in use at the end of 2014, according to our estimates, as well as to enable agencies to restore a modest number of additional vouchers.  If Congress increases voucher funding in 2015, it will also face important choices about how best to allocate the funding to agencies; see the Appendix for discussion.

[12] This estimate assumes that per-voucher costs rise at a 2.7 percent rate next year, consistent with the recent trend in rental costs according to the Consumer Price Index.