Repealing the expansion would harm states in other ways.  The expansion has produced net budgetary savings in many states, in part by enabling them to scale back funding for state-funded behavioral health and mental health programs for low-income residents who previously were uninsured but now are covered under the expansion.  Also, some expansion states have seen revenue increases from existing taxes on health plans and providers, such as managed care plans serving Medicaid beneficiaries.  Eliminating the expansion would not only weaken revenues from those taxes, but also put pressure on states to spend dramatically more on programs serving poor uninsured residents to meet the increased demand as the number of uninsured rises.

In addition, tens of billions of dollars in federal funds would be removed from expansion states’ economies each year.  Hospitals and providers, which have provided much less uncompensated care since the expansion took effect, would see these costs climb again.  Removing these federal dollars would be a particular burden on rural hospitals, which are facing financial pressures nationwide but have fared better in expansion states.

Millions of People Would Lose Coverage and Become Uninsured

The nation has experienced historic gains in health coverage since the ACA’s major coverage provisions took effect in 2014, with these gains being greatest in the states that expanded Medicaid.  For example, the uninsured rate among adults aged 18 to 64 dropped from 15.8 percent to 7.3 percent in expansion states between September 2013 and March 2016, compared to a drop from 20.6 percent to 14.1 percent in non-expansion states, an Urban Institute survey found.[1] (See Figure 1) 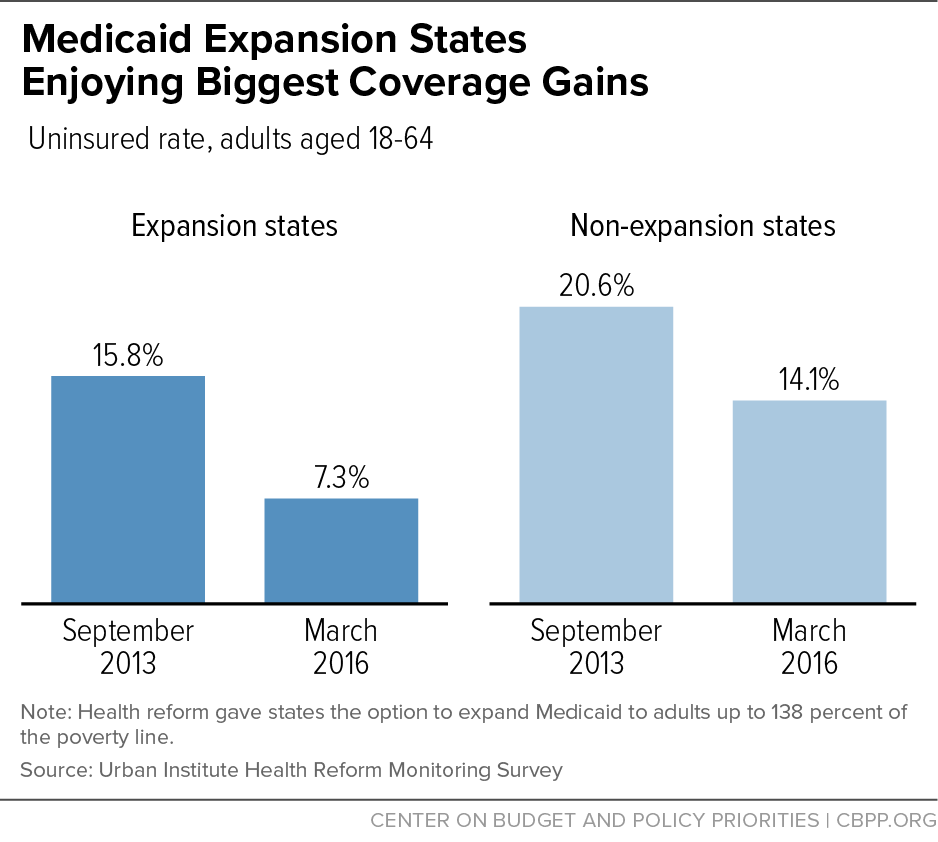 Repealing the Medicaid expansion would cause up to, and likely more than, 11 million people to lose their coverage.[2]  Most of them likely wouldn’t have an option for affordable coverage and would end up uninsured.  This is because the repeal of the expansion and weakening of the individual insurance market (due to repeal of health reform’s premium credits and the individual mandate, among other factors) would make coverage options for low-income uninsured people as scarce as they were before health reform, and likely worse.  (Before health reform, 81 percent of low-income workers lacked access to employer coverage because it was not offered to them or was too expensive for them to purchase.[3])  Repealing the expansion would also eliminate future prospects for coverage for the 4 million uninsured people in the 19 non-expansion states who would become Medicaid-eligible if their state expanded.[4]

Repealing the expansion would be particularly harmful to people of color.  Disparities in uninsured rates between whites and non-whites have fallen in expansion states but not in states that haven’t expanded.[5]

The Medicaid expansion has produced large net savings for many states’ budgets and wide-ranging benefits for their economies, due in large part to how it is financed.  The federal government has paid the entire cost of covering the expansion population to date.  Next year the federal matching rate will begin phasing down modestly; starting in 2020, the federal government is scheduled to pay 90 percent of the cost.  In the expansion’s first 18 months, an estimated $79 billion in federal Medicaid funds went to states to cover the newly eligible enrollees.[6]

Using these federal dollars to cover uninsured low-income people helped many states achieve savings.  For example, most states operate entirely state-funded programs that provide health services, such as mental health and behavioral health programs, to low-income residents with serious health needs.  Expansion states have seen demand for these programs fall substantially as many who had relied on them gained Medicaid coverage that covers many of these services.  Michigan, for example, saved an estimated $190 million in state fiscal year 2015 on a state program that serves the seriously mentally ill.  Kentucky saved $30 million on its mental health and behavioral health programs in the first 18 months of its expansion.[7]

The Medicaid expansion also allowed states with targeted Medicaid programs for low-income people with specific health conditions (such as certain women with breast and cervical cancers) — which previously were funded at the state’s regular matching rate — to transfer those people into more comprehensive benefits and at the expansion’s higher matching rate.  This saved Maryland $151 million in the first 18 months and Colorado $285 million in the first two years of their respective expansions.

Expansion states also are spending less to support uncompensated care furnished by health care providers like hospitals.  And they are collecting more revenue from taxes on health plans and providers, such as the Medicaid managed care plans that serve the new enrollees in many states, which have experienced a surge in enrollment due to the expansion.  Together, these factors explain why a number of states expect savings from expansion to outstrip costs through the end of this decade.[8]

Repealing the expansion would cause millions of people to lose their coverage and transfer the burden for financing care for low-income people (most of whom would end up uninsured) back to states and localities.  States and localities would have to spend more of their own money to cover the increased uncompensated care that hospitals would provide.  (The Urban Institute expects that the repeal bill as a whole would drastically raise demands for uncompensated care spending by states, because its approach to repeal would result in more uninsured than before the ACA.[9])  And as enrollment in Medicaid managed care plans dropped, states would collect less revenue from these plans.  It is very likely that in many states, repealing the Medicaid expansion would not only make it harder to provide health services to low-income people but also squeeze state funding for education, infrastructure, and other non-health priorities.

People enrolled under the Medicaid expansion — many of whom had previously lacked the coverage options available to other Americans — are receiving needed primary care and preventive health services, research shows.  For example, a survey of low-income non-elderly adults in three states found that the share of residents with a primary care physician rose by 8 percentage points more in the expansion states of Arkansas and Kentucky than in the non-expansion state of Texas.[10]

Repealing the Medicaid expansion would have large ripple effects across states.  Millions of people would lose their health coverage, with the vast majority ending up uninsured.  For those who have used their coverage to obtain treatment for serious conditions such as cancer and drug addiction, the loss of coverage could create profound hardship.  Many states would have to raise spending on services to the low-income uninsured, putting strains on other parts of the budget.  The loss of Medicaid funds to help cover services that they provide would place even greater financial pressure on hospitals and other providers, some of whom are already struggling.

[2] Approximately 11 million people had enrolled through the expansion as of the end of 2015, according to a Kaiser Family Foundation analysis based on administrative enrollment data.  Since then, Medicaid enrollment in expansion states has risen further, and Louisiana and Montana have implemented the expansion.  See Robin Rudowitz, Samantha Artiga, and Katherine Young, “What Coverage and Financing is at Risk Under a Repeal of the ACA Medicaid Expansion?,” Kaiser Family Foundation, December 2016, http://kff.org/medicaid/issue-brief/what-coverage-and-financing-at-risk-under-repeal-of-aca-medicaid-expansion/.

[3] “If Low-Income Adults Are To Gain Health Coverage, States Must Expand Medicaid,” Center on Budget and Policy Priorities, March 13, 2013, https://www.cbpp.org/sites/default/files/atoms/files/Fact-Sheet-Medicaid-Expansion-and-Able-Bodied-Adults.pdf.