As states facing substantial budget shortfalls due to the COVID-19 economic crisis consider cost-saving options in Medicaid, they should explore ways to reduce prescription drug spending rather than cut benefits or provider reimbursement rates, which could reduce access to care.

How Do State Medicaid Programs Pay for Prescription Drugs?

What Is the Medicaid Drug Rebate Program?

States that include prescription drug coverage in their Medicaid programs — which all states do — must cover all drugs approved by the Federal Drug Administration (with limited exceptions, defined in the Medicaid statute).

In return for states covering all prescription drugs, prescription drug manufacturers must provide them with substantial rebates, giving them a much lower price than typically offered to commercial health plans. These rebates allow states and the federal government to achieve savings of about 50 percent.

States are also free to negotiate better deals with drug manufacturers, including additional rebates on top of those guaranteed under federal law. And while states cannot exclude coverage for FDA-approved drugs, they can limit enrollees’ access to specialized, high-cost drugs to ensure their efficient use. For example, states can require prior authorization for specialized medications or require Medicaid beneficiaries to try a lower-cost drug within a class before getting a higher-cost one.

What Can States Do to Reduce Prescription Drug Costs? 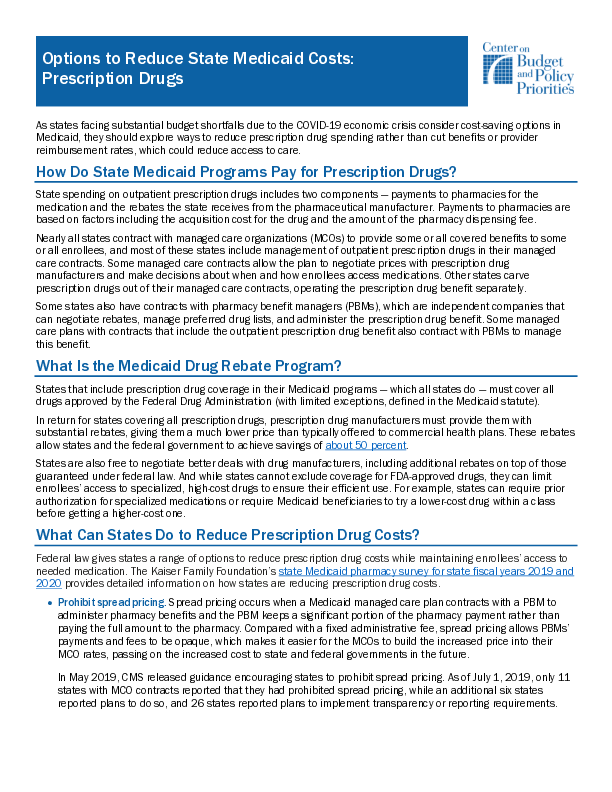