Medicaid provides essential care for 7 million seniors.  Medicaid covers nursing home care and other long-term services and supports, as well as other medical care and supportive services that Medicare doesn’t cover, which help many low-income seniors and people with disabilities stay independent and healthy. It also covers premiums, deductibles, and cost-sharing for Medicare beneficiaries.

Cutting Medicaid or radically changing its financing structure — for example to a per capita cap as in recent congressional Republican proposals to repeal the Affordable Care Act (ACA) —  would threaten the essential services and other assistance that seniors rely on to maintain their health and independence.  Instead of placing a cap on Medicaid, federal policymakers should support positive state innovations that improve coverage for seniors.

Medicaid Provides Crucial Services for Seniors and Their Families

States have flexibility under Medicaid to innovate and improve the delivery of health care services. For example, Programs of All-Inclusive Care for the Elderly (PACE) serve frail seniors in 31 states, and are funded by both Medicare and Medicaid.  These programs provide medical care and a comprehensive array of other services, including adult day care, to let seniors “age in place” instead of entering nursing homes.  PACE is shown to reduce hospitalizations, and there is evidence it can improve care quality and reduce mortality rates.

Millions of Medicaid beneficiaries would lose coverage, and hundreds of billions of dollars in federal Medicaid funding would be cut, under congressional proposals to impose a rigid and increasingly inadequate cap on federal funding for state Medicaid programs.  Such proposals would effectively end states’ option to expand Medicaid under the ACA, threaten health care for large numbers of low-income Medicaid beneficiaries, and leave seniors particularly at risk of going without needed care.

Such Medicaid cuts would:

This report was prepared with support from the Commonwealth Fund. 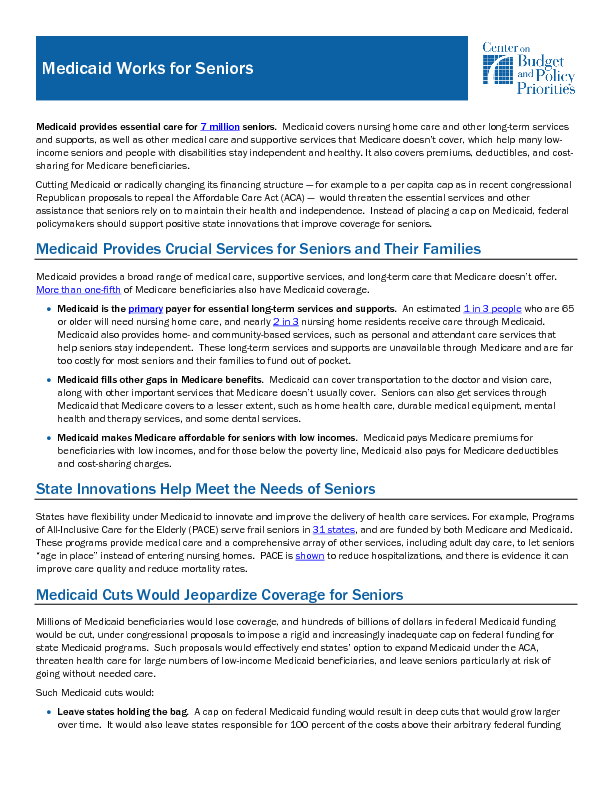