In the aftermath of Hurricanes Maria and Irma, people with health conditions in Puerto Rico and the U.S. Virgin Islands are reportedly struggling to get the health care services they need.[1]  Some of these U.S. citizens need treatment, and many have evacuated to states where they have family.  Congress and the Trump Administration can take several steps to ensure health care access for those affected by Hurricanes Maria and Irma.Others remaining on the islands may need to leave to get needed care.  To ensure that people from Puerto Rico and the U.S. Virgin Islands have access to treatments and services, Congress and the Trump Administration should quickly take steps to make Medicaid and marketplace coverage available to those who need it.

Federal responses to previous disasters provide a model for current policymakers to follow, but that’s just a start.  Congress and the Trump Administration can take several steps to ensure health care access for those affected by Hurricanes Maria and Irma, including:

The federal government picks up a fixed share of state Medicaid costs — now averaging 64 percent — meaning that federal Medicaid funding increases to immediately respond to higher costs resulting from natural disasters and public health emergencies.  After the 9/11 attacks, New York temporarily covered 350,000 individuals through Medicaid and financed about $670 million in health care costs resulting from the attacks.[2]  But Medicaid’s existing financial flexibility isn’t always enough to deal with the impact of disasters.  For example, Congress and the George W. Bush Administration needed to step in and provide supplemental funding to states directly affected by Hurricane Katrina as well as to states covering large numbers of people evacuated to other states. Similar action is now needed for Puerto Rico and the Virgin Islands.

The need is especially dire in those two jurisdictions because unlike the states, they get fixed Medicaid funding through a block grant, which was already insufficient before Hurricanes Maria and Irma hit.  Both Puerto Rico and the Virgin Islands won’t be able to finance their current share of Medicaid costs anytime soon in the aftermath of the hurricanes.  For example, while Puerto Rico’s and the Virgin Islands’ Medicaid programs remain responsible for paying health care costs for Medicaid beneficiaries who temporarily relocate, payments to evacuees’ host states may not be feasible given the islands’ financial situation.  Without congressional action to provide additional funding, evacuees and those needing to evacuate may go without access to essential health care.

Section 1115 of the Social Security Act allows states to seek federal approval to deviate from various requirements of federal law when necessary to implement demonstration projects that promote the Medicaid program’s objectives.[3]  Section 1115 demonstration waivers can expand Medicaid eligibility and benefits, and help states rebuild and redesign their health care infrastructure.  However, 1115 waivers cannot be used to eliminate the responsibility of states to pay their share of Medicaid costs.

The U.S. Department of Health and Human Services (HHS) also has authority under section 1135 of the Social Security Act to temporarily waive certain requirements under Medicaid, the Children’s Health Insurance Program (CHIP), and Medicare in the event of a declared public health emergency.  Under this authority, HHS can waive conditions of participation for providers and facilities, program participation and preapproval requirements, and physician licensure requirements, allowing providers to quickly provide care in an emergency.  While 1115 demonstration waivers can be approved for several years, 1135 waivers typically end no later than 60 days after approval.  HHS may extend the waiver for additional periods of up to 60 days until the end of the emergency period.[4]

Policymakers have granted these authorities to respond to past unanticipated events:

Replicating past waivers provided to disaster-stricken states would be an essential step in assisting Puerto Rico and the U.S. Virgin Islands.  The territories, however, are certain to need additional assistance due to their capped financing structure.  Although large numbers of evacuees may ultimately choose to permanently move to the continental United States, in the interim, Puerto Rico and the Virgin Islands are financially responsible for a significant share of their Medicaid costs.

Unlike state Medicaid programs, federal funds for Medicaid in the U.S. territories are provided through a highly inadequate block grant — a fixed amount of federal funding that falls well below the territories’ actual Medicaid costs.  Moreover, while states’ federal matching rates are based on their per capita income relative to the nation, territories like Puerto Rico and the Virgin Islands and receive a set match rate of 55 percent.  (If Puerto Rico’s matching rate were set under the same formula as used for the states, it would receive a matching rate of 83 percent.)  Once Medicaid expenditures exceed the federal block grant amount for the territory, the territory is responsible for all Medicaid costs going forward.  For example, before the ACA, the federal government was effectively only picking up 15 to 20 percent of Puerto Rico’s Medicaid costs.

The ACA provided an additional $7.3 billion in federal Medicaid funding to the territories, available from July 2011 through September 2019.  Puerto Rico has nearly exhausted its share of those funds so Congress provided an additional $295 million this past year.  But all of Puerto Rico’s supplemental funds are likely to be spent by early spring 2018, resulting in a fiscal cliff.  If Puerto Rico does not receive additional funding, it would likely have to remove up to 900,000 people from its Medicaid program (more than half of total enrollment).

Providing only $1 billion to Puerto Rico and $30 million to the Virgin Islands, as the bill recently reported by the House Energy and Commerce Committee would do, falls well short of what’s needed.  First, the bill would still require Puerto Rico and the Virgin Islands to increase their own Medicaid spending to obtain the additional funding, which is highly unrealistic since the hurricanes have drastically reduced their ability to maintain, let alone increase, their current spending.

Second, even if providing matching funds is possible, the funding isn’t enough.  The additional $1 billion to Puerto Rico would allow the Commonwealth to sustain its pre-hurricane Medicaid program for well less than an additional year.

What Congress and the Trump Administration Should Do

The bipartisan efforts to support states after 9/11 and Hurricane Katrina provide a clear model for Congress and the Trump Administration in the coming weeks; however, even more is needed to address Puerto Rico and the Virgin Islands’ unmet needs.  Short- and long-term funding could help ensure that people get the health care they need and help rebuild and sustain overwhelmed health care systems in Puerto Rico, the Virgin Islands, and other states recovering from recent hurricanes.  Moreover, permanent changes in policy could make it easier for states to respond to future disasters.

Streamline Access to Medicaid Through Administrative or Legislative Actions

HHS can take additional steps to ensure those affected by hurricanes and other disasters can enroll and maintain access to coverage in marketplace subsidies as well.  The department has already announced it’s extending enrollment periods (open enrollment and 2017 special enrollment periods) until at least December 31, 2017 for hurricane-affected individuals (as defined by the Federal Emergency Management Agency), and will monitor the situation to determine if it needs to further extend these deadlines.[19]  To the extent islanders have moved to the mainland and want to enroll in marketplace coverage, they and other hurricane-affected individuals would greatly benefit from HHS taking additional steps to ensure people have adequate opportunity to enroll, including:

[9] Kaiser Commission on Medicaid and the Uninsured, “A Comparison of the Seventeen Approved Katrina Waivers,” January 1, 2006, https://www.kff.org/medicaid/fact-sheet/a-comparison-of-the-seventeen-approved-katrina/.

[14] Florida, the one state that did not permit self-attestation, required individuals who were claiming Medicaid eligibility on the basis of a disability to provide physician verification.  See Kaiser Commission on Medicaid and the Uninsured 2006, op cit. 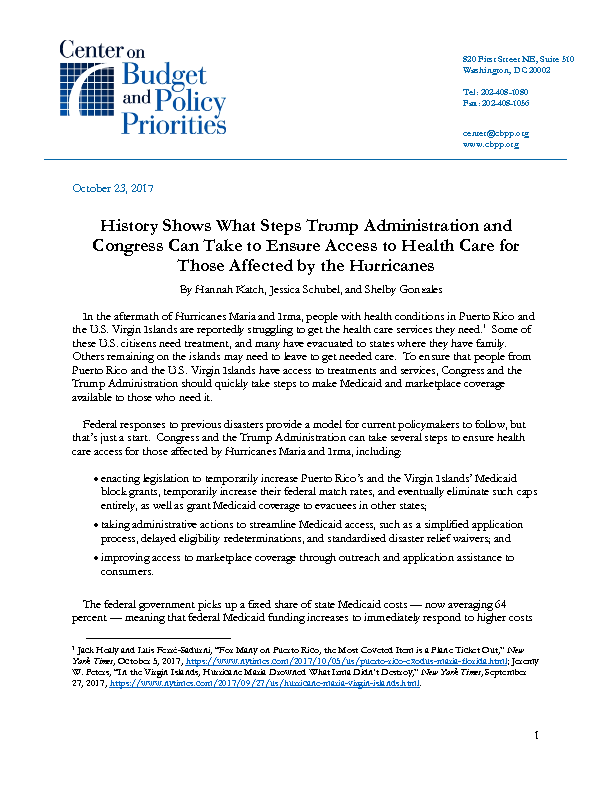