Senators Bill Cassidy and Susan Collins say their legislation to replace the Affordable Care Act (ACA) would allow people who like the coverage they have to keep it and states that support the ACA to maintain it.  In reality, however, their bill would almost certainly take health insurance and access to care away from many millions who now rely on ACA health coverage, especially those with low incomes and pre-existing health conditions.

Under the Cassidy-Collins bill, states would be assigned by default into a plan that would repeal most of the ACA’s market reforms, benefit standards, and consumer protections and eliminate the individual and employer mandates.  The default plan would also cap and cut the funding available for subsidies to purchase coverage in the individual market and encourage states to opt for a capped amount of federal funds in exchange for dropping (or never adopting) the ACA’s Medicaid expansion.

The bill would give states the option to reinstate the ACA, but they would likely have to pass new state legislation to do so.  Even if states were able to overcome considerable political and practical obstacles to restore the ACA coverage provisions, Cassidy-Collins would provide reduced federal resources, and current marketplace enrollees could find coverage increasingly unaffordable.  As a third option, the Cassidy-Collins bill would let states reject all federal assistance for coverage, effectively repealing the ACA with no replacement.

Moreover, the bill, especially the default plan, would rely heavily on a new type of Health Savings Account (HSA) that people could draw upon to purchase health insurance or pay out-of-pocket costs. The “Roth HSAs” that the Cassidy-Collins bill proposes as replacements for the ACA’s premium and cost-sharing subsidies would do little to help low- and moderate-income people afford adequate health insurance.  Their main effect would be to greatly expand tax-sheltering opportunities for high-income people.[1]

How the Cassidy-Collins Proposal Would Work

If a state does nothing, it would default to the “alternative” option.  The bill sponsors have said they would expect most states to select this option.  While the bill’s effective date is January 2018, Sen. Cassidy said he expects states to spend 2018 and 2019 choosing an option and implementing it, or letting the default take effect, so that the new structure is in place by 2020.[2]

Bill’s Other Options Also Would Worsen Coverage and Affordability

The bill gives states two choices for opting out of its default approach, both of which would worsen coverage and affordability compared to today.

Existing HSAs are tax-advantaged accounts available to people who have a high-deductible health plan to save money to pay out-of-pocket health expenses.  Cassidy-Collins would convert current HSAs into “Roth HSAs,” combining elements of current HSAs and Roth Individual Retirement Accounts.[9]

Cassidy-Collins would enable anyone in any state to create a Roth HSA, no matter which option a state chose and, consequently, no matter whether the individual is eligible for subsidies. In addition, the bill would allow anyone with health coverage to set up a Roth HSA, not just those with high-deductible plans — dramatically expanding eligibility for HSAs. Moreover, the bill would sharply increase the amounts that people could contribute to HSAs each year, including high-income people who are most able to contribute the maximum amounts to HSAs today.

The expanded eligibility for Roth HSAs, coupled with the increased contribution limits, would provide major new tax-sheltering opportunities for high-income people. They could make large contributions to these tax-favored accounts year after year and let their savings grow tax-free over time, securing a substantial new tax break.  The costs of the Roth HSA proposal would likely swell over time as investments in HSAs accrue without tax and as people make tax-free withdrawals to pay for medical and long-term costs upon retirement that they would have otherwise drawn from taxable income.

Meanwhile, this Roth HSA approach is a highly ineffective way to help low- and moderate-income people afford quality health coverage.  Proponents of HSAs as a way for working people to afford health care envision workers making contributions to the accounts that will grow over time as tax savings accumulate. But unlike higher-income people, many low- and moderate-income workers are unlikely to have much income to contribute to these accounts. And because many in “alternative” states would use the proposal’s inadequate tax subsidies as their primary means to pay for premiums and other health costs, they would likely exhaust their HSA contributions quickly — therefore not benefiting from the future tax savings on investment gains the accounts provide. As a result, the tax savings from accumulations are unlikely to amount to much for low- and moderate-income people, likely making the opportunity for future tax savings a false promise, and coverage less affordable — not more.

The Cassidy-Collins bill would require states to revisit their political struggles and administrative challenges over the ACA and act quickly to implement changes, including through legislation, regulation, and/or executive order.  The major changes in the bill take effect one year after its passage, though Sen. Cassidy has said at that point that states would spend two years choosing an option and implementing needed changes.

But states are unlikely to be able to act quickly or easily in response to legislation like Cassidy-Collins.  They would need significant time to work through the details, even in cases where governors and legislatures agree on what to do.  They would need to give insurers that operate in their markets direction about what rules to follow, with additional time needed in states that diverge from the ACA’s requirements.  As noted, no matter how much a state might want to maintain the status quo, Cassidy-Collins proposes capped and reduced federal funding, making it difficult — or perhaps impossible — for states to follow through on that promise.

Finally, the proposal doesn’t do anything to ensure that insurance companies would continue to offer plans in states’ individual markets or that they would keep premiums affordable as states shift from the current ACA-based structure to the new one.  Passage of Cassidy-Collins would immediately create unprecedented uncertainty in insurance markets, with the rules of the road up for grabs in every state.  Without additional, rapid efforts, a state’s individual market could unravel before Cassidy-Collins takes full effect.  Residents of the state would abandon their coverage, enrollment in the individual market would shrink, and insurers would likely flee if nothing more than Cassidy-Collins were put in place.

So while Senators Cassidy and Collins tout their plan as a way to give states choices to maintain or reject the ACA and let people keep the coverage they have now, it doesn’t appear that the plan would achieve those goals.  Instead, Cassidy-Collins would undo the Affordable Care Act, which has improved millions of people’s access to health coverage and medical services, and leave states to decide what, if any, “replacement” they could establish despite more limited federal resources.  The result likely would be less affordable health coverage and many more people uninsured or underinsured than under the ACA.

[7] American Academy of Actuaries, “An Evaluation of the Individual Health Insurance Market and Implications of Potential Changes,” January 2017, p. 22, https://www.actuary.org/files/publications/Acad_eval_indiv_mkt_011817.pdf. 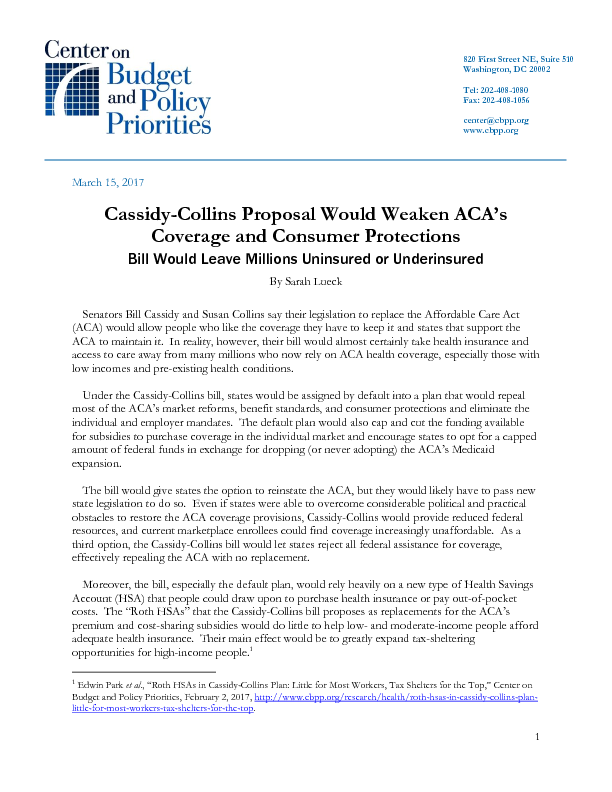