With debate beginning on the Senate budget resolution, congressional supporters of the 2001 and 2003 tax cuts have begun recycling old arguments for extending all of these tax cuts.  Among these is the claim that the tax cuts have made the tax code more progressive.

Supporters of the tax cuts generally do not attempt to refute these facts.  Instead, they frequently point to CBO data showing that high-income households paid a larger percentage of federal taxes in 2004 (after the tax cuts) than in 2000 (before the tax cuts).  They claim that this shows that the tax cuts made the tax system more progressive, and they imply that it means that high-income households received disproportionately small tax cuts, or even that these households are paying more in taxes now than in earlier years.  Such claims and inferences are incorrect.

Other Measures Also Cast Doubt on the Tax Cuts’ Fairness

Comparisons of percentage changes in after-tax earnings, such as those shown in Figure 1 above, measure the tax cuts’ effect on the distribution of income.  But in evaluating the tax cuts’ overall fairness, it is also useful to examine the cost of the tax cuts going to different income groups, as well as to compare these costs with expenditures on leading national priorities.

For example, over the next ten years (assuming the tax cuts are extended), more than $700 billion will be spent on tax cuts for the 0.3 percent of households with incomes over $1 million, with these tax cuts averaging over $150,000 per household per year.*  In today’s terms, the annual cost of tax cuts for this group will exceed what the federal government currently spends on K-12 and vocation education, veterans’ medical care, or the National Institutes of Health (see Figure 2).  At issue is whether providing such large tax benefits to households at the very highest income levels represents the best — or most equitable —  use of scarce public resources.

The same CBO data cited by tax-cut supporters also show that high-income households are paying considerably less of their income in taxes now than before the tax cuts.  In 2000, households in the top 1 percent of the income scale paid an average of 24.2 percent of their income in federal individual income taxes.  By 2004 (the latest year for which data are available), that figure had fallen to 19.6 percent, the lowest level since 1986.  That decline works out to a reduction in these households’ tax burden of about $58,000 per household (in 2004 terms).

As these facts suggest, the change in the “percentage of taxes paid” is not a useful metric for assessing which income groups benefited the most from the tax cuts or whether the tax cuts made the tax code more or less progressive.  This measure is fundamentally flawed in three respects. 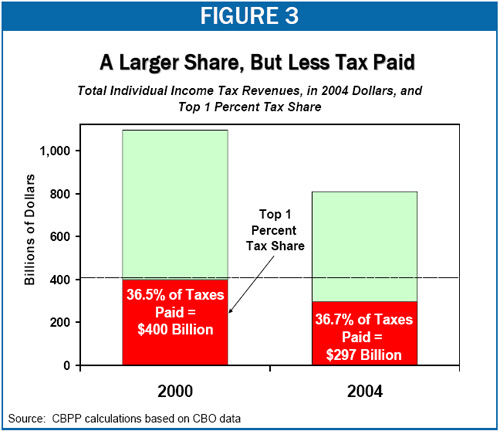 [1] It should be noted that the Tax Policy Center estimates provide a better guide to the effects of the tax changes enacted in 2001 and 2003 than do the Congressional Budget Office data.  The CBO data reflect the effects not only of legislative changes but also of changes in the economy.  As a result, part of the drop in effective tax rates that the CBO data show for households at the top of the income scale likely reflects the decline in their incomes (which, as of 2004, had not yet recovered to their 2000 level in real terms).  On the other hand, the CBO data may understate the regressivity of the tax cuts relative to what it will be when all the tax cuts are fully in effect, since some income tax cuts that are highly skewed to households at the top of the income scale were not yet in effect in 2004.

[2] For further discussion of these issues, see William G. Gale, Peter R. Orszag, and Isaac Shapiro, “The Ultimate Burden of the Tax Cuts:  Once the Tax Cuts Are Paid For, Low- and Middle-Income Households Likely to Be Net Losers, On Average,” Center on Budget and Policy Priorities, June 2, 2004, https://www.cbpp.org/6-2-04tax.htm.