PDF of this report (7pp.)
Image

States face continued major budget problems, because of the steepest-ever decline in state revenues and the end of most federal Recovery Act assistance halfway through their coming fiscal year. As a result, governors are proposing a new round of deep budget cuts that would increase unemployment and threaten the fragile economic recovery. Without further federal aid, the actions states will have to take to close their budget gaps could cost the economy 900,000 jobs.[1] Congress is considering extending some assistance to states as part of forthcoming jobs legislation.

A recent Goldman Sachs report underlines the importance of state fiscal conditions to the health of the economy. Goldman projects economic growth will slow later this year, in part because “state and local budget cutbacks will almost certainly still be weighing on overall demand.” [2] Similarly, Mark Zandi, Chief Economist of Moody’s Economy.com, recently warned that large state budget cuts next fiscal year “will be a serious drag on the economy at just the wrong time.”[3]

States confront an estimated $180 billion budget gap for fiscal year 2011, which begins July 1, 2010 in most states. The majority of governors now have submitted their 2011 budget proposals, and they demonstrate the scale of cuts that are likely to be pursued to close this large gap. For example, Arizona’s governor would eliminate the state’s children’s health insurance program which covers 47,000 children and repeal Medicaid coverage for more than 310,000 adults with low incomes and/or serious mental illnesses. Mississippi’s governor would cut state funding for K-12 schools by over 9 percent and close four state mental health clinics. Hawaii’s governor would eliminate a program that provides cash assistance to low-income people who are elderly or have disabilities and also make large cuts to the state workforce. New York’s governor would eliminate municipal aid to

Most governors who have released their budget proposals for the coming fiscal year are proposing smaller budgets in 2011 — typically by 5 to 10 percent — than their states spent in 2009, even though most states face rising numbers of people in need of public services and growing populations.

When states cut spending, they lay off employees, cancel contracts with vendors, eliminate or lower payments to businesses and nonprofit organizations that provide direct services, and cut benefit payments to individuals. In all of these circumstances, the companies and organizations that would have received government payments have less money to spend on salaries and supplies, and individuals who would have received salaries or benefits have less money for consumption. As a result, budget cuts directly remove demand from the economy, which in turn costs jobs.

Job loss would have been much more severe were it not for significant fiscal relief provided in the American Recovery and Reinvestment Act (ARRA). Congress authorized this aid in large part to help states — which are facing record revenue declines due to the recession — avert budget-balancing actions that would further weaken the U.S. economy. ARRA gave states roughly $140 billion over two and a half years to help fund ongoing programs, primarily education and health care programs. These funds closed about 30 percent to 40 percent of states’ 2009 and 2010 budget shortfalls. Without them, cuts in health care, education, human services, public safety, and other areas would have been much deeper, and job losses much larger.

As this report explains, cuts in state and local services reduce the number of jobs in the economy by shrinking overall demand. But states and localities are also contributing to high unemployment more directly, by laying off public workers — and at an increasingly rapid pace.

Additional job losses are likely in the coming months, as states expect only modest revenue growth in the coming year. This would be consistent with previous recessions: state budgets typically recover two to four years after a recession officially ends, leading to continued job losses that slow the recovery. In the 25 months following the end of the (much milder) 2001 recession, for example, states cut 71,000 workers. The job losses ended only in December 2003, when the federal government enacted $20 billion in emergency aid to states. Since state revenues fell much more sharply in the 2007-2009 recession, it is reasonable to predict a greater loss of jobs over a longer period of time. 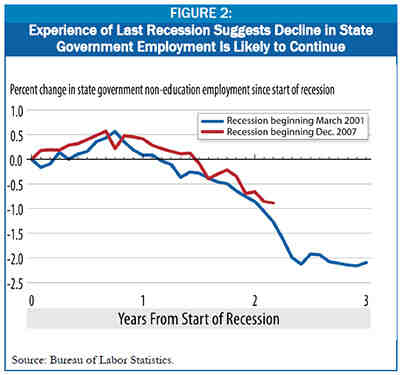 The bulk of ARRA’s fiscal relief — a temporary increase in the federal share of Medicaid costs — will expire on December 31. States also will have spent most of their education fiscal relief funds by that time. This means that without additional fiscal relief, states will have to institute massive new budget cuts and tax increases at the start of the new fiscal year on July 1, when unemployment is expected to remain at or near double-digit levels and the economy will likely still be fragile.

The majority of governors have now released their proposed budgets for the upcoming fiscal year. While many of those proposals will be changed before they are enacted, they are indicative of the magnitude of the cuts that states are facing.

Other governors have simply provided a dollar figure for the cuts that state agencies would likely receive under the proposed budget, without fully explaining how these cuts would be achieved or how many people would lose access to services as a result.

At least eighteen of these governors — eight Republicans and ten Democrats in Alabama, California, Colorado, Connecticut, Florida, Georgia, Maine, Maryland, Massachusetts, Michigan, Minnesota, Missouri, Nevada, New Mexico, New York, Pennsylvania, Rhode Island, and Washington — assume in their proposals that the increase in federal Medicaid assistance will be extended for the rest of state fiscal year 2011, and the National Governors Association has formally requested the extension.[5] Such an extension is included in legislation that the House of Representatives passed last fall. If the federal government does not extend this aid, these states likely will be forced to make deeper and broader cuts than those they have already proposed.