In the bipartisan deficit-reduction negotiations that Vice President Biden is conducting with congressional leaders and senior lawmakers, Republicans have proposed that negotiators include a global spending cap in the package they craft.  And this week, the House Judiciary Committee approved, on a party line vote, a constitutional balanced budget amendment that includes a global spending cap.  A constitutional balanced budget amendment sponsored by all 47 Republican Senators also includes such a cap.  Legislation to impose a statutory global spending cap, known as the CAP Act, has been introduced by Senator Bob Corker, with 15 Republican, two Democratic, and one Independent sponsors and in the House by Rep. John Duncan with seven Republican and one Democratic co-sponsors.  Rep. Jack Kingston and three Republican co-sponsors have introduced an even more severe global spending cap.

The cap that these proposals would establish very likely would make it impossible to enact any market-based strategy to reduce the carbon pollution that drives global warming.  That's because all such strategies — from carbon taxes to carbon "allowance" systems — are "scored" under Congressional Budget Office (CBO) budget rules as both raising federal revenues and spending them.  Comprehensive climate change legislation would raise revenues by putting a price on greenhouse gas pollution and use those revenues for such purposes as protecting consumers and energy-intensive firms and workers and investing in energy efficiency and clean energy technology.

Because the global spending cap proposals would impose a cap on total federal spending in any fiscal year (as a percent of Gross Domestic Product, or GDP), they would bar adoption of such strategies unless they contained large offsetting cuts in other government spending.  This would be true even for climate protection proposals that raised sufficient revenue to fully cover their spending — or even went further and reduced the deficit.  In other words, even climate protection legislation that reduced the deficit would run afoul of a global spending cap.

The required budget cuts would come on top of trillions of dollars in cuts to Medicare, Medicaid, numerous other programs, and possibly Social Security that policymakers already would have to make to comply with a global spending cap. [1]   All of the global spending cap proposals set their spending caps so low that meeting them would require severe cuts in existing programs.  Trying to find even larger cuts — to accommodate consumer and industry protections and clean energy investments in climate legislation — would very likely prove an insurmountable obstacle.

Climate legislation of the last Congress illustrates the problem.  The House passed comprehensive legislation in 2009, while the Senate worked on similar legislation in 2010 (although neither the climate legislation approved by the Senate Environment and Public Works Committee nor the Kerry-Lieberman American Power Act ever reached the Senate floor).  Another approach was the Cantwell-Collins "cap-and-dividend" bill.  In each case, the legislation would have put a limit (or "cap") on the overall amount of greenhouse gases — mainly carbon dioxide from the burning of fossil fuels — that could be emitted each year.  Electric power plants, oil refineries, and other firms responsible for emissions of carbon dioxide and other greenhouse gases would be required to hold permits (called "allowances") for the greenhouse gas pollution they emitted.  The number of allowances would be capped at an amount below current emissions levels, inducing companies to find ways to reduce their emissions to stay within the established limit.

Under some bills, most emissions allowances in the initial decades would be allocated for various public purposes, including consumer relief on electric bills and efficiency investments.  Other allowances would be auctioned, with the revenues used to provide cash refunds to low-income consumers.  A fraction of the allowance revenue would go to ensure that the legislation would not increase the budget deficit.

Still another market-based approach would place a price on carbon directly through a carbon tax, with a share of the revenue used for consumer relief and/or investments in clean energy and efficiency.

The major cap-and-trade proposals in the last Congress generated both substantial revenues ($751 billion to $873 billion over the first ten years) and substantial outlays ($732 billion to $864 billion), as Figure 1 shows.  The revenues exceeded the outlays, which would reduce the deficit somewhat. 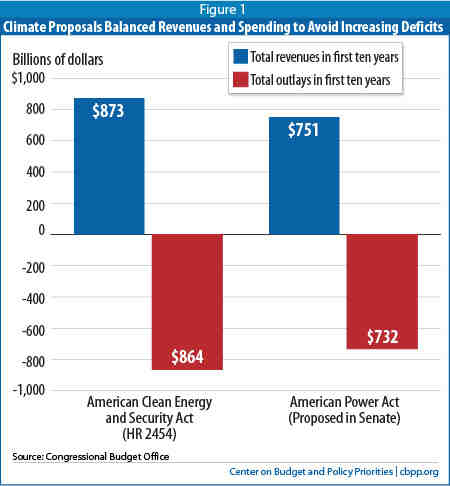 Although other congressional spending cap proposals, such as those included in the House Judiciary Committee and Senate Republican balanced budget amendments and in the Kingston bill, would set a global cap at an even lower level, analysis of the effect of the 20.6 percent of GDP limit proposed in the CAP Act illustrates the problem.  That analysis shows that such a limit would require cuts of stunning depth, including (almost inevitably) some cuts in Medicare and Medicaid and possibly Social Security, as well as in many other programs.[4]

Proponents of limiting spending to 20.6 percent of GDP note that was the average level of federal expenditures from 1970 to 2008.  That average figure provides a poor guide, however, to future needs.[5]  In the next 25 years, the share of the population that is elderly will grow by more than half.  Health care costs are also much higher today, and continue to rise as a result of medical advances that prolong life but at added cost.  In addition, the 1970-2008 average reflects little expenditure for homeland security (the nation spent far less on that before the September 11 terrorist attacks) and almost nothing for the Medicare prescription drug benefit (which did not take effect until 2006).  Nor does this average reflect much of the health care and disability compensation costs for those injured in the Iraq or Afghanistan wars.

As a result, policymakers could not shrink federal spending to 20.6 percent of GDP and hold it there in coming decades as the population ages without making severe cuts in Medicare, Medicaid, a wide array of discretionary programs and other vital federal activities, and very possibly Social Security.

If its cap were breached, the CAP Act would impose automatic across-the-board cuts in spending.  Achieving the cap entirely through this automatic mechanism would mean budget reductions of a stunning $1.3 trillion in Social Security, $860 billion in Medicare, and $550 billion in Medicaid just over the 2013-2021 period.  The cuts would grow even more severe in later decades.  The automatic cuts would be even larger under the Kingston bill.

Policymakers could avoid these automatic across-the-board cuts, of course, by making specific cuts in particular programs.  But they could not spare Medicare and Medicaid, and possibly Social Security, from deep reductions, since together those programs will account for nearly 60 percent of federal program spending by 2021.  And if policymakers protect Social Security, they would have to make even deeper cuts in Medicare, Medicaid, and a vast array of other programs.

In fact, limiting spending to no more than 20.6 percent of GDP would necessitate radical policies similar to those contained in the House-passed budget plan of House Budget Committee Chairman Paul Ryan.  Those drastic changes include converting Medicare into a voucher system that would more than double seniors' out-of-pocket health care costs , converting Medicaid into a block grant that would cut federal funding nearly in half by 2030, eliminating health reform's provisions that will extend coverage to 34 million more Americans, and cutting funding for non-security discretionary programs by one-third by 2021 and more in subsequent years.  The severe cuts in the Ryan budget would place federal spending over the next two decades roughly at the level of the cap; CBO has estimated that under the Ryan plan, federal spending would be 20¼ percent of GDP in 2020 and 20¾ percent in 2030.[6]

In other words, the CAP Act would require either draconian policy changes like those in the Ryan budget or severe across-the-board cuts.  Other proposals that would set a global spending cap at an even lower level would require even more severe cuts.  The required cuts under the Kingston bill, which would cap federal spending at 18 percent of GDP, would necessitate even more severe cuts, like those in the Republican Study Committee budget, which says it reduces federal expenditures to 18 percent of GDP by 2017.[7] As a result, it is extremely hard to see how the expenditure needs of comprehensive climate legislation could be accommodated.  If the global spending cap were in place, climate legislation would have to include additional severe budget cuts, on top of the cuts already imposed to comply with the spending cap, regardless of whether the climate policy legislation was deficit neutral.

A global spending cap would all but doom efforts to enact comprehensive climate change legislation.  Even if such legislation did not increase deficits, it would increase federal spending, and every dollar of additional spending would have to be offset by spending cuts, regardless of how much revenue the legislation generated.

Global warming is clearly one of the greatest problems we face; to address it, we will have to overcome significant obstacles.  A global spending cap would make those obstacles almost insurmountable.

[1] For an analysis of the cuts required to buy a cap equal to 20.6 percent of GDP, see Edwin Park, Kathy Ruffing, and Paul N. Van de Water, "Proposed Cap on Federal Spending Would Force Deep Cuts in Medicare, Medicaid, and Social Security," Center on Budget and Policy Priorities, revised April 15, 2011.  Lower caps would, of course, require even deeper cuts.