How to Find Out if You Can Get Help from SNAP

If you would like help from SNAP, contact your local human services office. The staff there will work with you to find out if you qualify. You may also find information and referrals by dialing 211 in most states.

Notes: SNAP is often referred to by its former name, the Food Stamp Program. Your state may use a different name.

The administrative flexibility has also facilitated growth in SNAP participation to meet increased need and ensure that families experiencing hardship can quickly get benefits to buy food. The government funding bill enacted in October allows states to extend many of these flexibilities and use them without requesting USDA approval, which is especially important given that the Agriculture Department (USDA) had limited or ceased approvals of some of these key flexibilities in recent months. The extension of these options facilitates states’ ability to continue to provide SNAP in a timely manner and help families struggling with hardship.

The far-reaching health and economic effects of COVID-19 and widespread business closures to limit its spread have made it even more difficult for many low-income households to afford food, and data have shown a sharp increase in the number of families reporting difficulty affording adequate food and other basic needs. SNAP is essential to helping these families put food on the table.

As we’ve explained, the Families First Coronavirus Response Act provided USDA with authority to let states temporarily modify procedures to make it easier for families to continue participating in or apply for SNAP. And it temporarily suspended, nationwide, SNAP’s three-month time limit on benefits for unemployed adults under age 50 without children in their home. In addition to provisions in the law, USDA has encouraged states to use existing program flexibility. The law also included a temporary boost of emergency supplementary benefits and school meal replacement benefits. Beginning this summer, USDA began to curtail approval for many of the options to modify administrative procedures. But the government funding bill passed October 1 restored most of them; states will likely use these for the rest of 2020 and the first half of 2021.

The Families First benefit enhancements that states are still using include options to:

USDA also approved several waivers that Families First allows for states to temporarily adjust their operations to help manage their workloads and help participants gain and maintain access to the program; states are no longer using most of these options, as the government funding bill provided states with more flexibility to implement similar provisions:

Beginning in August, USDA limited approvals of many waivers that modified SNAP procedures and began approving states for narrow versions of these waivers, though these waivers are now replaced by the more flexible options included in the government funding law. USDA approved waivers for states, called either “core verification and interview adjustment” or “periodic report flexibility for non-extended recertification cases” waivers, that give states more flexibility to streamline the renewal process for households that are due to renew in coming months, such as limiting the number of households required to complete an interview at recertification. These waivers are not shown in the tables.

The government funding bill enacted October 1 restored the more expansive versions of the following options and allowed states to implement them without USDA approval. Given that the public health and economic consequences of COVID-19 will likely continue for many months, states will continue to need flexibility to modify processes to effectively manage their caseload. Because these options provide more flexibility to states for the same procedures than the narrower options USDA previously had been approving, states will likely use these options instead of the earlier waivers (both the original Families First Act waivers, approved in the spring, and the narrower waivers USDA approved beginning in August).

These options, shown in Table 3, allow states to:

Continue extending certification periods for households for up to six months for periods expiring up until June 30, 2021 and modify requirements for households to report changes in their circumstances This option is consistent with guidance issued in April, which is more expansive than the limited modifications USDA had been approving for fall 2020.

Use periodic report procedures instead of the more extensive recertification process for households due to recertify through December 31, 2021. SNAP participants are required to provide certain updates about their circumstances at certain intervals; this is a much more streamlined process than the recertification process, which requires an application and interview.

Waive interviews for some new applicants applying and households recertifying through June 30, 2021. Consistent with the original waivers USDA approved, states can continue to approve households for SNAP benefits (or to continue receiving benefits) without an interview, as long as states can verify applicants’ identity and other required items.

Other Administrative Options and Waivers

USDA has also approved and extended many other waivers under the Families First Act that temporarily suspended administrative requirements for states, not shown in the tables below.[2]

In addition, USDA has approved waivers to modify aspects of states’ quality control processes. States must independently check the accuracy of household eligibility and benefit levels for a share of their cases each month. The process typically involves an in-person interview with households, often at their home. All states opted to use the Act’s flexibility to conduct quality control interviews by phone instead of in person. USDA approved state extensions of this waiver through June for 49 states, and notified states that they may extend this waiver through December 2020. USDA gave all states and territories participating in SNAP an extension of the deadlines for reporting findings from households that were reviewed in December 2019, or January or February 2020, and recently announced an extension for households selected in June 2020. USDA allowed all states and territories participating in SNAP to cancel reviews for the months of March, April, and May, and the government funding law suspends these reviews for June 2020 through September 2021.

USDA has also denied state waiver requests, some of which USDA has detailed in a letter. For example, over half of states had requested waivers to temporarily suspend the student eligibility rules, which limit SNAP eligibility to college students enrolled at least half time in institutions of higher learning to those who meet certain exemptions, such as those who are working at least 20 hours per week or are participating in federal work study programs. USDA also denied waivers to temporarily adjust other practices, including application processing, quality control, reporting, and other aspects of program rules.

Note: Issuance dates vary by state and states may actually issue allotments in the next month or request an allotment near the end of the month. (For example, a state may not have been approved for a September allotment until the end of September.)

*The Families First law, which originally authorized P-EBT, authorized the program through September (fiscal year 2020), and USDA has approved some states to provide benefits in August and September of the 2020-2021 school year under that law. The government funding law, passed in September 2020, extends this option through September 2021 and expands the program, such as including schools using a mix of in-person and virtual learning and for children in child care. USDA has not yet approved states past September 2020.

This table includes waivers under the Families First law, which require USDA approval, and were largely approved through August 2020, with the exception of waivers to modify telephonic signature requirements. For more on states’ use of waivers, see: https://www.fns.usda.gov/programs/fns-disaster-assistance/fns-responds-covid-19/snap-covid-19-waivers. This table also included includes options from the government funding bill passed October 1, 2020 that do not require USDA approval and that states may implement through June 2021, or December 2021 for the option to use periodic report procedures to recertify households. For more on states’ use of these options, see https://www.fns.usda.gov/snap/cr-state-options. Except where noted, this table does not include the more limited waivers USDA approved for states to modify aspects of recertification processes in fall 2020. For more on those waivers, see: https://www.fns.usda.gov/disaster/pandemic/covid-19/snap-core-verification-interview-adjustment and https://www.fns.usda.gov/disaster/pandemic/covid-19/snap-periodic-report....

2 USDA reports that these states have opted to extend certification periods, but it does not indicate they have chosen to adjust periodic reports.

3 These states are waiving the interview at initial application only.

[1] The original interview waivers included three major adjustments of normal SNAP requirements for state agencies. The waivers allowed states to approve new households without conducting the normally required interview; allowed states not to offer a face-to-face interview or grant one upon request; and allowed states to certify households with very low income eligible for expedited service to be approved without an interview. The original waivers included all three, but some extensions for July and beyond include just some of those components.

[2] Here is a brief summary of many of these waivers, all of which can be found at Food and Nutrition Service, “SNAP: COVID-19 Waivers by State,” https://www.fns.usda.gov/disaster/pandemic/covid-19/snap-waivers-flexibilities.

USDA has allowed 25 state agencies to temporarily stop pursuing certain claims and not consider related payments delinquent. (When SNAP households receive more benefits than they are eligible for — for example because the SNAP eligibility worker made a mistake, or the household misunderstood the rules or provided incorrect information, either by mistake or intentionally — SNAP state agencies must collect the amount overpaid, unless pursuing the claim is not cost effective.) All of these states have had these waivers extended through June, and some 13 states have received July extensions, with smaller numbers approved for extensions past July. USDA has also approved one state (California) for an extension on submitting data to USDA on claims collection.

At least 23 states have been approved for waivers to extend the timeframe to complete fair hearings, which states are required to provide for SNAP participants to appeal a state decision that affects their participation, such as denying or terminating benefits; these hearings are an important tool for clients to exercise their rights. All of these states have had these waivers extended through June and fewer states were extended through July, August, September, and October.

At least four states have received waivers to extend the timeline for administrative disqualification hearings, which states must provide to determine that an individual has committed an intentional violation of program rules (such as making a false statement), and with fewer states approved past June.

USDA has approved at least five state waivers to temporarily suspend use of the Income and Eligibility Verification System, a database in which states ordinarily must verify certain income and other information.

Three states have received approval to extend the period of time granted to households that have attempted but are unable to provide a Social Security number, and these waivers have been extended through September or October.

At least two states have received approval to delay notices that states must issue to households with multiple EBT card replacement requests.

Three states have received waivers to allow certain community partners who assist SNAP applicants with the application process to sign the application on the client’s behalf after obtaining consent to serve as the client’s authorized representative, and USDA has allowed these extensions through September.

At least four states have been approved to suspend in-person collection of applications and verification documents for August and September. 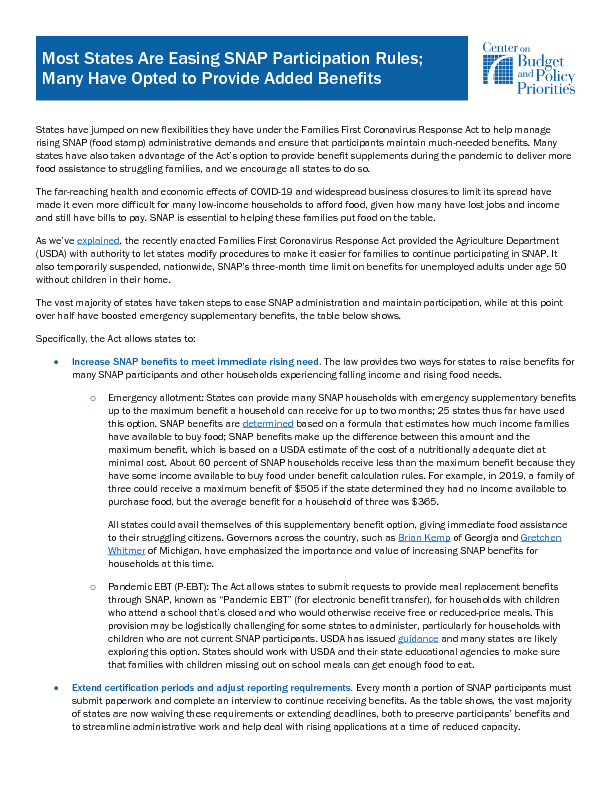