SNAP redemptions are a meaningful share of food purchases in our country.  In fiscal year 2017, SNAP participants redeemed about $63 billion in SNAP benefits for food purchases, supporting retailers of every size.  In 2014 (the most current year available), the roughly $70 billion in SNAP redemptions accounted for approximately 10 percent of expenditures on food for consumption at home.[1]

SNAP generates business for retailers of all types and sizes.  SNAP retailers comprise big- box superstores and major national grocery chains as well as small specialty stores, convenience stores, and farmers’ markets.  Between 2013 and 2017, the number of authorized retailers increased by 4 percent.[2]  Recent growth in the number of participating retailers has made SNAP an integral part of the food retail industry.

The large number and wide variety of authorized retailers also helps ensure that low-income families across the country can regularly access a store where they can redeem their SNAP dollars for food.  Though SNAP participants in some areas of the country, particularly rural areas, still have inadequate access to food stores, most can easily redeem their benefits.  Nationally, there are an average of about 79 SNAP authorized retailers per 100,000 people.[3]

SNAP provides important support for small business.  While over 80 percent of SNAP benefits are used at larger stores, including superstores (like Wal-Mart, Target, and Costco) and supermarkets (like Food Lion and Safeway), the vast majority of SNAP authorized retailers — about 80 percent — are smaller stores.[4]  These include many locally owned businesses, such as private groceries, convenience stores, dairies, butchers, bakeries, and farm stands.  For these small businesses, SNAP is an important revenue source — particularly in high-poverty areas, where SNAP purchases can account for a significant share of a retailer’s total sales.

SNAP increases both food and non-food purchases.  Households participating in SNAP spend more on food.[5]  But SNAP also increases their overall purchasing power, allowing them to meet other basic needs.  By providing more resources for food, SNAP helps free up cash for poor households to buy other essential items, like diapers and medication.  As a result, retail sales increase, benefiting stores that sell both food and non-food items.

SNAP helps local economies.  Because most households redeem their monthly SNAP benefits quickly and because the program helps struggling households purchase adequate food, SNAP is one of the most effective forms of economic stimulus during a downturn.  Economists estimate that, in a weak economy, every SNAP dollar that households redeem expands the economy by about $1.70.[6]  In 2009, the peak year of the last recession, $50 billion in SNAP benefits were spent in local stores, generating about $85 billion in local economic activity, even as the overall economy was struggling.

SNAP’s consistent standards create efficiencies for business.  In order to accept SNAP benefits, retailers must apply and meet certain standards.  Qualifying stores must sell food for preparation and consumption at home and meet one of two criteria.  A retailer must either (1) continuously stock a certain variety of staple foods, including perishables, or (2) have more than 50 percent of its gross retail sales from staple foods.  While most authorized stores qualify by meeting the first criterion, specialty stores, like butcher shops, are often authorized under the second.  The USDA’s Food and Nutrition Service carefully and continuously monitors retailers in order to protect the program and promote integrity and compliance among retailers.[7]

SNAP also has national standards about which products can be purchased with SNAP, and how benefits are redeemed.  This uniformity promotes efficiency and limits costs for the private sector.  Retailers with multiple locations and presence in multiple states can employ consistent operational practices and equipment across their stores.  The Food Marketing Institute (FMI), a trade association that represents food retailers and wholesalers, recognizes that this benefits the industry and customers alike.  As FMI Chief Public Policy Officer and Senior Vice President Jennifer Hatcher recently told Congress:

We now have a national program with nationally-approved products that is consistent from state to state.  The evolution to 100% interoperable electronic transactions … has made the program much easier for operations and compliance and much simpler for customers.… [T]he efficiencies and simplicity of the administrative function of SNAP that have achieved easier operation and compliance and a simpler customer experience have happened because of the consistency of a national program.[8]

[3] CBPP calculation of the U.S. Department of Agriculture Food and Nutrition Service SNAP Retailer data (see https://www.fns.usda.gov/snap/retailerlocator) as of December 13, 2017 and the U.S. Census Bureau, Annual Estimates of the Resident Population as of July 1, 2017.

[4] Smaller stores include all authorized SNAP retailers other than superstores, supermarkets, wholesalers, and large and medium grocery stores.

[6] Alan S. Blinder and Mark Zandi, “The Financial Crisis: Lessons for the Next One,” Center on Budget and Policy Priorities, October 15, 2015, https://www.cbpp.org/research/economy/the-financial-crisis-lessons-for-the-next-one.

[8] Testimony of Jennifer Hatcher, Food Marketing Institute, hearing on “The Next Farm Bill, The Future of SNAP,” before the House Committee on Agriculture, Subcommittee on Nutrition, March 28, 2017. 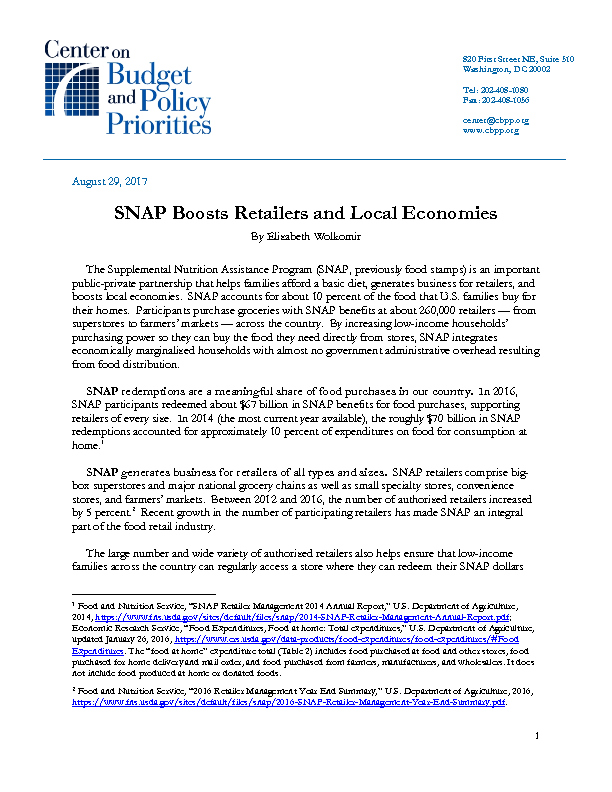