| By Isaac Shapiro and Joel Friedman

The percentage of income that most categories of taxpayers pay in federal taxes is at the lowest level in decades.  Despite this fact — and despite the large current federal budget deficit and the even larger fiscal problems projected for coming decades — the Administration and Congress are pushing for additional tax cuts that would aggravate these problems.

This drop in overall federal tax burdens has been driven by a pronounced decline in income-tax burdens. 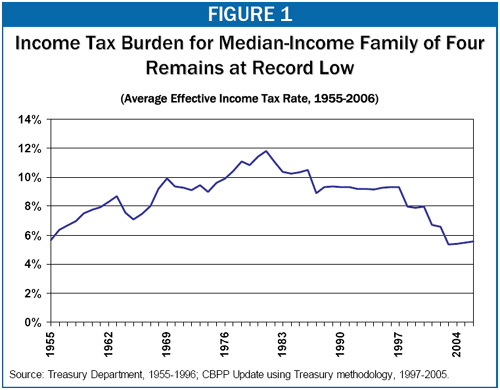 Although middle-income taxpayers, and particularly those with children, have benefited from the tax cuts enacted since 2001, the bulk of the benefits from those tax cuts have accrued not to middle-income families but to those with high incomes.

In 2005, federal revenues were well below their historical average as a share of the economy.  Projections by the Congressional Budget Office show that, if the 2001 and 2003 tax cuts and accompanying Alternative Minimum Tax relief are extended, revenues as a share of the economy over the next decade will be below the average levels of the 1960s, 1970s, 1980s, or 1990s.  This weakening of the federal revenue base has been a major cause of the stunning fiscal deterioration of the past few years.

Over the next decades, as the baby-boomers retire in large numbers, the nation is projected to face persistently large deficits that ultimately may do significant damage to the economy.  The data presented here thus suggest that policymakers should be considering how to shore up the revenue base and whether the tax cuts adopted in recent years remain affordable.  Instead, the budget put forward by the President, as well as the budgets that have been adopted by the House Budget Committee and the Senate, all include further tax cuts.  Partly as a result, all three budgets would cause the deficit to be larger than if we simply maintained current policies.

Most immediately, Congress is considering tax reconciliation legislation that would extend the capital gains and dividend tax cuts beyond their currently scheduled expiration, as well as pension legislation that would, for the first time, make permanent certain of the 2001 tax cuts, without paying for them.  These actions could set a dangerous precedent for extending other tax cuts enacted since 2001 without offsetting their costs.  Doing so would be especially ill-advised in light of looming large deficits and historically low tax burdens.

[2] Office of Tax Analysis, Department of the Treasury, “Average and Marginal Federal Income, Social Security and Medicare, and Combined Tax Rates for Four-Person Families at the Same Relative Positions in the Income Distribution, 1955-1999,” January 15, 1998.  The median-income family of four is in the exact middle of the income spectrum: half of all families of four have higher incomes, while the other half have lower incomes.