Congressional Republicans this fall are poised to launch step one of a likely two-step tax and budget agenda: enacting costly tax cuts now that are heavily skewed toward wealthy households and profitable corporations, then paying for them later through program cuts mostly affecting low- and middle-income families.  Most Latino families would lose more from the program cuts than they would gain from the tax cuts.

When deficits rise, those who supported the tax cuts will likely label these deficits as unacceptable and point to spending as the culprit.  When that happens, they presumably will call for the kinds of deep cuts they’ve already proposed in their long-range budget plans, which would hit basic assistance for struggling families, health care and education, and other key investments.  Those cuts could happen as soon as next year.

When Tax Cuts Are Ultimately Paid For, Latinos Likely to Bear Significant Burden

President Trump and Republican House and Senate leaders have been very clear on the areas they want to cut.  The Trump and congressional budget plans for the next decade would cut basic assistance and health care for millions of low- and moderate-income people, making it harder for them to afford the basics and get health care.  They also would cut key investments in areas such as education, job training, Head Start, and child care.  Indeed, the Administration and congressional leaders have pointed to current deficit projections — even without $1.5 trillion in new, deficit-increasing tax cuts — to justify these cuts.  Once a tax bill is law and deficits grow, they will likely argue that the resulting higher deficits make such cuts even more urgent.

The GOP tax framework released in late September and the House Ways and Means proposal would provide very large tax cuts to the wealthiest Americans and profitable corporations, while providing only modest or no help to millions of low- and moderate-income households.  Indeed, under the House plan, 10 million children in low-income working families would not benefit at all from the proposed expansion in the Child Tax Credit and 13 million additional children would receive less than the full $600-per-child increase available to higher-income families.  When Congress turns its attention to paying for those tax cuts, most Latino families would likely lose more from cuts in areas such as health care, child care assistance, college aid and job training, food assistance, and refundable tax credits — that is, from programs that provide them with needed support or promote their upward mobility — than they would gain from the heavily skewed tax cuts. 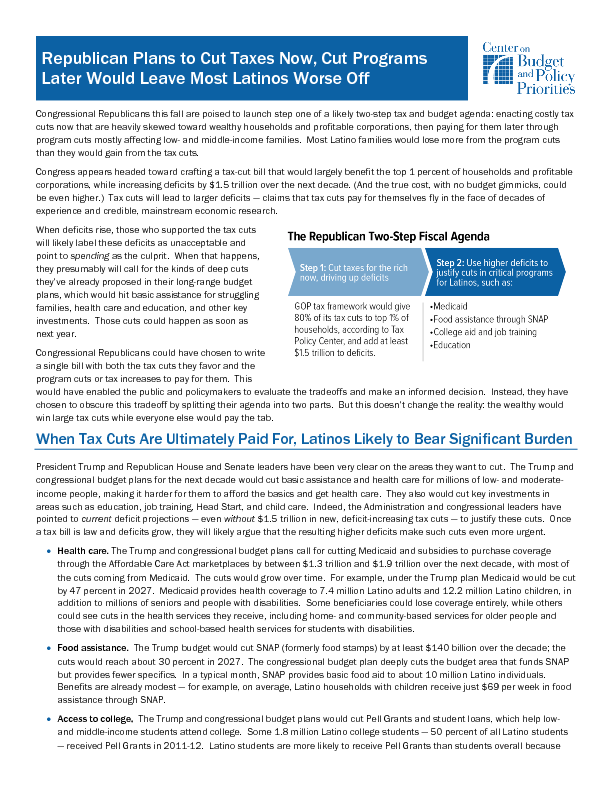