Congress faces key budget issues this fall:  providing relief from the tight caps that constrain defense and non-defense appropriations, addressing the shortfall in the Highway Trust Fund, and deciding whether to continue certain largely business tax breaks that have expired (known as “tax extenders” because they have been routinely extended in the past).  Congress’s approach to key budget issues reflects ideological preferences, not consistent application of budget rules.Each has significant budgetary consequences.  Yet Congress and particularly the Republican majority have taken different approaches to whether and how such proposals should be paid for — approaches that reflect their policy and ideological preferences rather than a consistent application of standard budget rules.

Traditional budget rules offer no rationale for Congress to be strict about requiring offsets for additional non-defense appropriations, evasively lenient with respect to higher defense funding, much more stringent than the standard rules with respect to the Highway Trust Fund, and permissive when it comes to extending largely business tax breaks.  Instead, taken together, the varied approaches seem to reflect a view that government spending outside of defense is dubious and should be resisted, while tax cuts and defense spending should be encouraged irrespective of their effects on the deficit.  Erecting hurdles for needed non-defense spending that defense spending and the tax extenders won’t face could have a significant, and potentially detrimental, effect on the outcome of this fall’s policy debates.

“Paying for” Proposals to Increase Deficits

The default approach to budgeting is often that Congress should pay for, or offset, any legislation that increases deficits above what they would otherwise be.  This approach is embodied in the pay-as-you-go (PAYGO) law, which states that any measure cutting revenues or increasing entitlement benefits must be paid for over the decade.[1]  It is also implicit in the caps on annual appropriations; if funding for one program would drive total appropriations above its cap, then policymakers must cut funding for a different program.

But what does it mean to increase deficits above what they would otherwise be in those cases where funding levels are not explicitly set in statute?  It means increasing costs relative to underlying budget law — that is, relative to a budget baseline.  The concept of paying for increases thus means, with respect to deficits and debt, “do no harm,” or in budgetary language, “don’t raise baseline deficits.” Since 1985, a budget baseline has been defined by law.  Although the baseline law has been tweaked a few times since then, CBO’s published budget baselines follow the law.

In contrast, Congress’s recent approaches to paying, or not paying, for certain policies do not reflect a coherent application of these budget rules, but rather are a reflection of the majority’s policy and ideological priorities.

In the Budget Control Act (BCA) of 2011, Congress enacted dollar limits, or caps, on the level of funding for defense and non-defense appropriations for each year from 2012 through 2021.  The BCA also required Congress to adopt further deficit reduction that fall.  But it failed, so under the BCA, a process known as “sequestration” lowered the defense and non-defense caps further.[2]   The CBO baseline assumes adherence to these sequestration-level caps through 2021, with funding for these programs growing with inflation thereafter.

In 2013, the Bipartisan Budget Act — the deal negotiated by Sen. Patty Murray and Rep. Paul Ryan, who were then chairs of the Senate and House Budget Committees, respectively — provided some relief from the sequestration reductions in 2014 and 2015.  The cost of this relief for appropriated programs was offset by reductions in entitlement spending and increases in certain fees and receipts.  President Obama has proposed raising the defense and non-defense caps for 2016 by roughly $38 billion each and has called for a process like that which produced the Murray-Ryan agreement of 2013: legislation to raise the caps for a few years, and in the same piece of legislation, cuts in entitlement programs and increases in user fees and revenues over ten years sufficient to fully offset the higher costs.

But congressional Republicans are taking a different approach — for defense spending, only.  They take note that war funding (also known as Overseas Contingency Operations or OCO) is outside of, and so not constrained by, the caps.[4]  Instead of negotiating increases in the caps — and paying for those increases — they have decided to increase “war” funding by $38 billion above the President’s OCO request for 2016 and then allow the Department of Defense to use that entire amount for regular, non-war military activities.  In effect, they are evading the defense caps by misclassifying the $38 billion increase as a war cost, although they freely admit that the classification is just a pretense.

From a budgetary point of view, what’s important is that the extra $38 billion will not be offset; the legislation providing the additional OCO funding will not include any offsetting savings in 2016 or later years.  In short, Congress is circumventing the rules that call for adherence to the defense caps, and circumventing the norm that they must pay for any increase in the caps.

Unlike with defense funding, however, the congressional Republican leadership apparently intends to abjure relief for non-defense appropriations, rigidly adhering to the caps as they stand.  Some other Republican members, especially some on the Appropriations Committees, seem open to relief for non-defense programs, but only if the relief is offset, as under the Murray-Ryan agreement of 2013 and as the President has proposed.  Either way, this is a more exacting standard than the Republican leadership is applying to defense funding.

The situation with the Highway Trust Fund (HTF) is more complex.  The HTF is not subject to the funding caps established by the BCA, nor to PAYGO. [5]  But it makes just as much sense to pay for new HTF costs as it does to pay for any other new costs that Congress may consider, whether tax cuts or increases in other programs.

The key issue is what should constitute the benchmark for determining a “new HTF cost.”  The approach consistent with longstanding practice and the baseline statute, and thus reflected in the CBO baseline, projects future HTF funding to equal the existing 2015 level of $50.6 billion, with no adjustments for inflation or a growing population.  In short, the CBO baseline includes $506 billion in HTF funding over the next decade, and amounts above that would be considered a new cost.

Both the House and Senate this year adopted special rules applicable only to the HTF, however, that have the effect of forcing Congress to pay for any funding above an alternative, lower benchmark level that limits HTF funding to the amount the existing federal gasoline tax can support, which is about $170 billion less over the decade than the amount the CBO baseline contains.  For purposes of budget enforcement, Congress picked the toughest budgetary test it could find for the HTF.  As a result, Congress is required to offset $170 billion of costs that are already built into the CBO baseline plus any increase above that baseline; it is required to pay to “fill up” the HTF, as well as any increases from there.[6]

To illustrate this point, consider the short-term HTF measure enacted July 31, 2015.  That law transferred $8 billion from the Treasury’s general fund to the HTF, allowing the HTF to continue to operate through October 2015 (the first month of fiscal year 2016) at the level the CBO baseline assumes.  In its cost estimate of that measure, CBO writes, “The [$8 billion] transfer would increase the balances in the Highway Trust Fund, but would not, by itself, increase direct spending or affect budget deficits.” (Emphasis added.)  CBO explains that the funding linked to the transfer “is already reflected in CBO’s baseline, which includes an annualized amount for the year ($51 billion) based on the amount that was previously authorized through July 31, 2015.”[7]  Notwithstanding CBO’s clear statement that the new law does not increase spending, the House and Senate felt compelled, by their own rules, to offset the $8 billion transferred to the HTF.

In contrast to requiring offsets for non-defense discretionary cap relief and HTF funding, neither the House nor Senate has attempted to offset the cost of the “tax extenders’ — a series of largely business tax breaks that policymakers have routinely extended for a year of two at a time, most of which expired at the end of 2014.  The CBO baseline projections reflect that the tax extenders have expired, and therefore extending them without offsets would increase deficits relative to the CBO baseline.

The Senate Finance Committee approved a two-year extension of these provisions, and the House passed bills to make several of the extenders permanent (and expand them in some cases), but neither proposed offsetting the cost of these tax breaks.[8]

Measuring Relative to the Budget Resolution

Some may suggest that the Republican leaders’ contorted approach to budget discipline is consistent with the Republican budget resolution that Congress passed this spring.  Yet that argument dissolves under scrutiny.

To be sure, in their budget plan, Republicans called for using the “war” funding gimmick to get around the tight cap on defense funding.  The resolution also reflected deep cuts in highway funding — well below last year’s level — and its authors took credit for the savings when they claimed $5 trillion in spending cuts.  Republicans consequently could argue that to be consistent with their budget plan, they must offset any increase in highway funding above the shrunken level of funding their budget assumed.   In reality, however, no Republican seems to be making this argument or highlighting the fact that their budget resolution called for deep cuts in highway spending relative to current levels.

The disconnect is most acute on the tax side.  The Republican budget plan adopted the CBO baseline levels as its revenue target and thereby assumed that the expired tax expenders either would not be reinstated or, if they are reinstated, would be paid for.  Extending these tax breaks without offsetting their cost is at odds with Republican leaders’ own budget plan.

Congress seems to be charting its own zig-zag course when it comes to following budget rules for the important debates expected this fall.  To summarize:

Traditional budget rules are ideologically neutral.  They treat spending and revenues the same way; both a spending increase and a tax cut, measured relative to the baseline, add equally to the deficit.  They also treat adherence to the caps for defense and non-defense appropriations the same.  The approach taken by congressional Republican leaders to offsetting the cost of legislation, however, appears to be driven by ideology or policy preferences — and when the rules interfere, they are waived or ignored.

[1] As a technical matter, PAYGO includes additional requirements, such as that costs must also be offset over five years.  Further, statutory PAYGO does not necessarily require that each piece of legislation be offset; rather, it requires that the net cost and savings of all legislation enacted must not exceed zero.  For an explanation of how this test works with ever-shifting budget windows, see the official explanation at https://www.whitehouse.gov/omb/paygo_description/.

[4] §251(b)(2)(A) of the Balanced Budget and Emergency Deficit Control Act of 1985 (as amended) provides that to be outside the caps, a law needs to designate funding as “Overseas Contingency Operations” (OCO) or “Global War on Terror” (GWOT) funding, and the President needs to agree to that designation.

[6] Technically, the special House and Senate rules require Congress to pay for amounts transferred from the general fund to the HTF even when those transfers would merely allow the HTF to obligate amounts that are already built into the CBO and congressional baselines.

[8] Tax legislation, like entitlement legislation, is governed most generally by the PAYGO rules, which require paying for tax cuts or entitlement expansions relative to the baseline. Therefore, to revive the tax extenders without paying for those costs violates PAYGO.  Under the PAYGO requirements, any costs that are not offset ultimately trigger automatic cuts in various entitlement programs, including reductions in Medicare payments to hospitals, doctors, and insurance plans, to generate the needed savings.  Not surprisingly, the House and Senate exempt these unpaid-for costs from PAYGO. 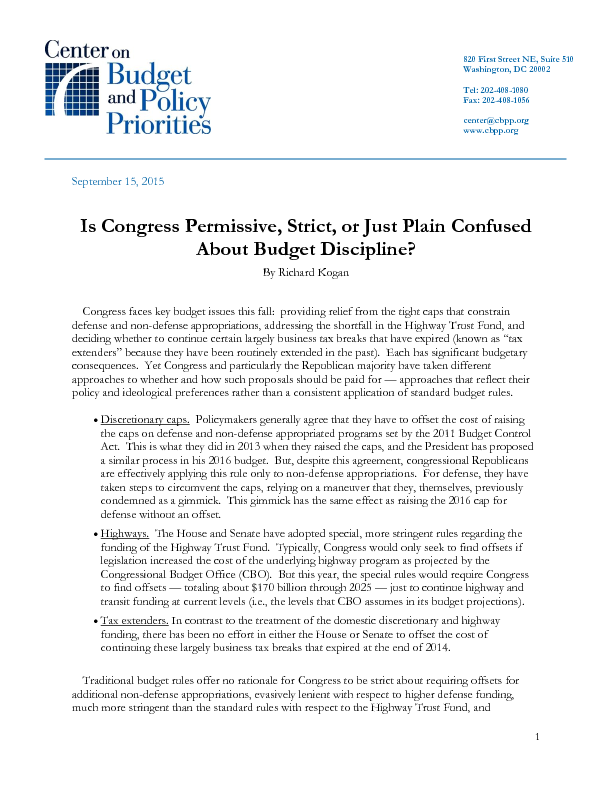