To determine what has happened to block grants over time, we measure funding changes for each grant from its date of inception (as well as from 2000), defining the inception date as the year each block grant was fully in effect in its current basic form.  Thus, numbers in this paper may differ from other analyses which instead measure funding changes from the final year of a block grant’s predecessor program(s) — an analysis often done for TANF but difficult to do for some other block grants.

While CDBG and SSBG had existed since the mid-1970s, modifications made in OBRA were significant enough to consider the two programs, in their current forms, to have been adopted in 1982.  For example, the CDBG small cities grant program had initially been operated directly by the federal government, but OBRA turned that program over to the states to run, and also folded several additional categorical grants into the block grant.  And OBRA completely replaced SSBG’s authorizing law, eliminated the matching requirement, and folded in another categorical grant.

Job training grants are currently authorized by the Workforce Innovation and Opportunity Act (WIOA) of 2014, which replaced the Workforce Investment Act (WIA) of 1998.  Their origin goes back to the Comprehensive Employment and Training Act (CETA) of 1973, which had operated largely through city and county governments.  CETA was replaced by the Job Training Partnership Act (JTPA) of 1982, which gave more power to states.  Appropriations were authorized for 1983, but the first official program started in 1984.  Because job training grants under JTPA did not differ fundamentally in purpose and structure from those under WIA/WIOA, we use 1984 as their inception date.

The TANF block grant, which replaced AFDC, was created in the 1996 welfare law.  But AFDC was phased out during the following year and TANF was not fully in effect until 1998.  The 1996 welfare law also repealed and consolidated three AFDC-related child care programs into one block grant, creating the mandatory component of the Child Care and Development Fund (CCDF).  Although the discretionary component was authorized by the Child Care and Development Block Grant of 1990, we use 1997 — when the mandatory component was first appropriated — to compare funding levels for the entire program.

For the purpose of this paper, we include grants to territories and tribes, as long as they are the same block grant program (this explains why our TANF figure is slightly larger than $16.5 billion, for example).  We also take into account small set-asides that are closely related to the block grant program, such as those for training, technical assistance, research, or evaluation.  (Among other reasons, amounts for these routine set-asides are sometimes difficult to identify in historical funding data.)

We exclude other set-asides or related programs that were temporary or inconsistent, serve different purposes, and/or have different grantees.  For example, we don’t count two set-asides within the MCHBG because they are awarded competitively and open to a wider range of grantees; nor do we count earmarked funding for specific projects that was provided under the CDBG heading in the past.  TANF Supplemental Grants, which Congress has failed to fund since 2011, are excluded as well — as is TANF contingency funding, which operates under inconsistent, year-by-year funding regimes and is sometimes not used at all.  We also ignore ad-hoc disaster assistance and loan or loan guarantee programs sometimes funded within these accounts.

For 2017 funding levels of discretionary programs, we take their 2016 levels and apply the across-the-board cut of 0.1901 percent contained in the continuing resolution now in effect (PL 114-254), which extends through April 28, 2017.  As we explain in the paper, final funding levels may differ from our estimates but are more likely to be lower than higher.

For the PHHSBG, which has been funded by transfers from the mandatory Prevention and Public Health Fund since 2014, we use the amount of the transfer directed in the 2016 Omnibus Appropriations Act.  For TANF and the mandatory component of CCDF, we use the amount of funding provided in the authorizing law.  For SSBG, which is also a mandatory program but subject to sequestration, we take its current-law level and apply the sequestration percentage for covered mandatory programs, which is 6.9 percent in 2017. 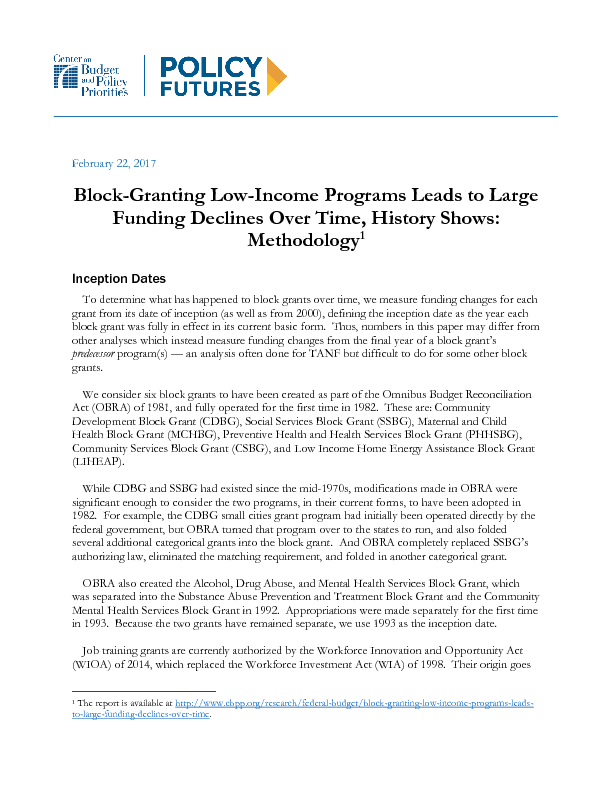 PDF of this methodology paper (3 pp.)