Policy Brief: How States Use Funds Under the TANF Block Grant

States only spend a little more than half of their combined federal and state dollars under Temporary Assistance for Needy Families (TANF) on core areas — basic assistance for families with children, child care for low-income families, and work-related activities or supports (see Figure 1) — and a handful of states spend less than a quarter on these areas, our look at the latest data from fiscal year 2017 shows. Those figures point to fundamental flaws with the TANF block grant, which the President and Congress created under the Personal Responsibility and Work Opportunity Reconciliation Act of 1996, and which gives states great flexibility on using the funds. A look at how states spend the TANF funds provides compelling evidence on why basic safety net programs should not be block-granted. (See our full report for greater detail, as well as our fact sheets and spreadsheet with state-by-state information.[1])

States Spend Only About Half of TANF Funds in Core Areas

When TANF was created in 1996, a primary intent was to make a program that helped cash assistance recipients find and maintain work that would reduce their need for cash assistance. Yet nationally, states use just 52 percent of federal and state TANF funds for basic assistance, work-related activities, work supports/supportive services, and child care, the latest data from fiscal year 2017 show (see Figure 1). Some states spend much less (see Figure 2).

States Spend Nearly Half of TANF Funds Outside Core Areas

States diverted a significant portion of the funds from supporting needy families and used them to fill state budget holes.Instead of investing in connecting families to work, supporting them in work, and providing temporary cash assistance, states use a large share of TANF funds — more than three-quarters in some states — in other areas.

Some states have used TANF funds to expand programs, such as Earned Income Tax Credits (EITCs) or pre-kindergarten, or to cover the growing costs of existing services, such as child welfare. While these are worthy and important investments, states should use funding other than federal and state TANF funds for them, particularly when the average state spends only around half of its TANF funds to provide direct financial assistance, connect TANF families to work, or provide child care help to low-income working families. Also, some states have used TANF funds to replace existing state funds, thereby freeing those state funds for purposes unrelated to providing a safety net or work opportunities for low-income families.

Key areas of spending outside of core areas include:

The track record of state spending under TANF offers broader lessons about the risks of block-granting core programs for low-income families and giving states greater flexibility on how to spend funds previously used to meet basic needs.

TANF proponents said that states would use their flexibility to shift spending from cash assistance to improved work programs and work supports. But that is not what happened. Instead, states diverted a significant portion of the funds from supporting needy families and used them to fill state budget holes. The bulk of funds withdrawn from the cash assistance to low-income families have not gone to programs that connect families to work or to support low-income working families.

In addition, as noted, the federal TANF block grant is not adjusted for inflation and thus has eroded badly over time, losing one-third of its value since 1997. These two factors — the funds’ diminished value and broadened dispersal — have left states with fewer resources to serve needy families. The lessons of TANF spending patterns should provide a cautionary tale for proposals to restructure other means-tested programs along similar lines. 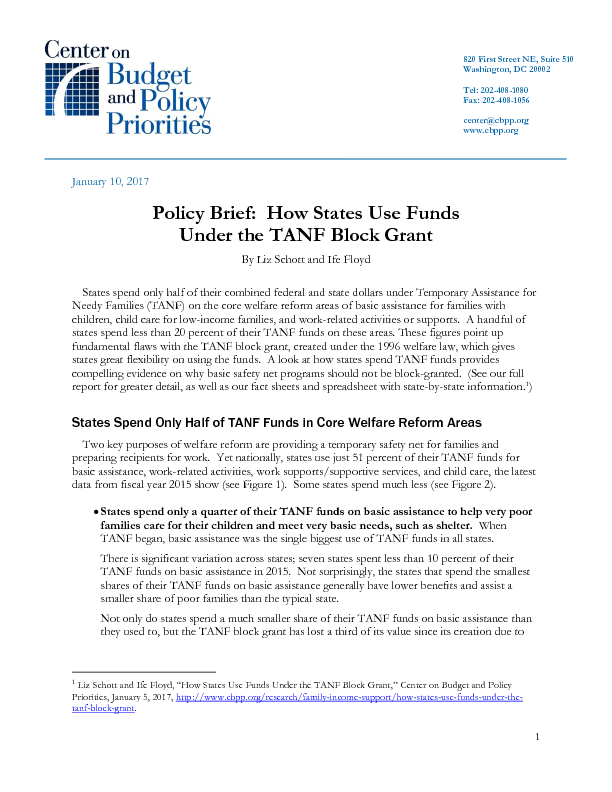