| By Laura Meyer and Ife Floyd

The Temporary Assistance for Needy Families (TANF) block grant is designed to provide temporary cash assistance to families in poverty — primarily those with no other means to meet basic needs — but its reach has shrunk considerably over time.[1] In 2019, for every 100 families in poverty, only 23 received cash assistance from TANF, down from 68 families when TANF was first enacted in 1996. This “TANF-to-poverty ratio” (TPR) is the lowest in the program’s history. (See Figure 1.) If TANF had maintained the same reach to families in poverty as its predecessor, Aid to Families with Dependent Children (AFDC), had in 1996, 3.1 million families would have received TANF in 2019, about 2 million more than reported for that year.

Our analysis finds that:

The states and the federal government have a critical role in ensuring that families with the lowest incomes have access to a minimum level of support to meet their basic needs. The TANF block grant shifted that responsibility to states, which — with no national standards to hold them accountable for providing assistance to families in need — acted in their own self-interest, not in the best interest of families in poverty and particularly of families of color. 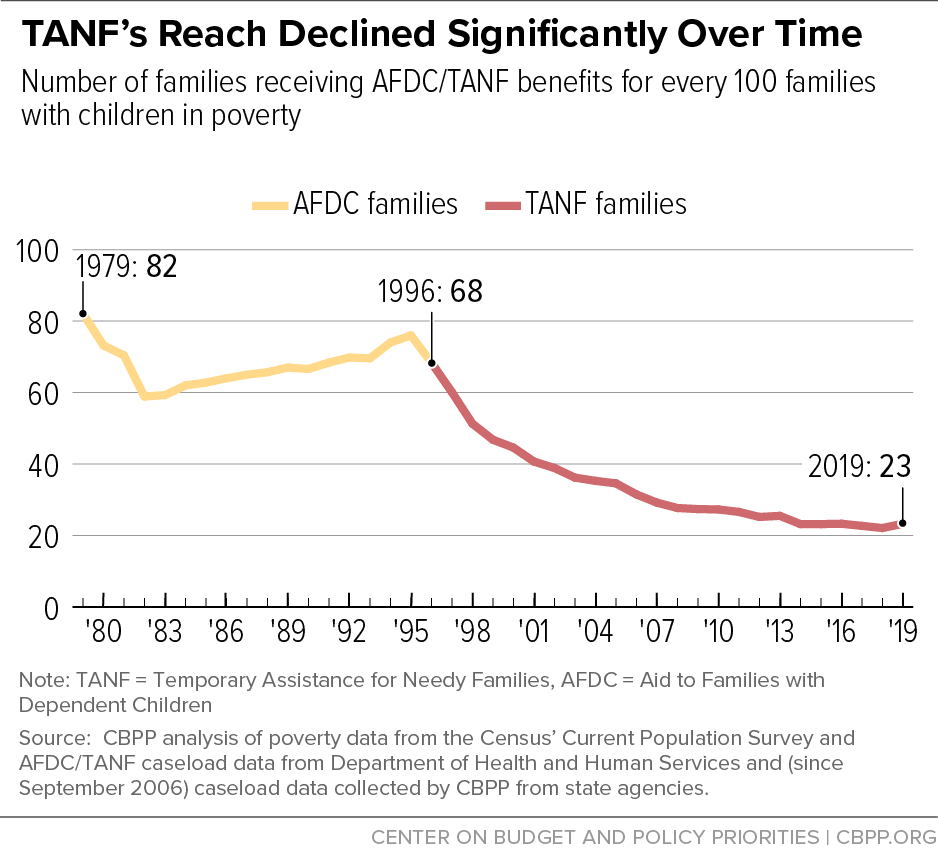 The national TANF-to-poverty ratio misses the extreme — and growing — variation among the states. In 2019 the TPR ranged from 70 in California down to just 4 in Louisiana.[2] (See Table 1.) The TPR fell in a majority of states in recent years for several reasons: policy changes to restrict access and reduce costs during the Great Recession, adoption of more restrictive policies as part of a broader attack on economic security programs, and state responses to federal policy changes when TANF was reauthorized, among other factors.[3]

An especially troubling trend is the number of states with TPRs of 10 or less. In 2006, only three states (Idaho, Louisiana, and Wyoming) had such low ratios. The list grew during the Great Recession and has continued growing since then. In 2019, 14 states — Alabama, Arizona, Arkansas, Georgia, Idaho, Indiana, Kansas, Louisiana, Mississippi, North Carolina, Oklahoma, South Carolina, Texas, and Wyoming — had TPRs of 10 or less.

A history of racist policies that aimed to limit Black mothers’ access to family cash assistance programs continues to contribute to racial disparities in access to TANF today. Forty-one percent of the nation’s Black children live in states with TPRs of 10 or less, compared to 33 percent of Latino children and only 28 percent of white children.[4] Nationally, therefore, Black children are less likely than white children and somewhat less likely than Latino children to have access to TANF assistance when their families fall into crisis.

From its roots, the public cash assistance system has excluded Black families in need. Aid to Dependent Children (later named Aid to Families with Dependent Children), the first federally supported cash assistance program, gave states and localities broad freedom to control the program. This control led to much lower benefits in the Southern states, where most Black families lived. And policymakers conditioned benefits on conformity to certain behaviors through rules such as “suitable home” and “man-in-the-house” policies, which disproportionately diminished or cut off benefits for Black families.

The AFDC caseload grew through the 1960s and 1970s and, despite states’ efforts to limit Black families’ participation in the program, their numbers grew as well.[5] To ensure that Black families could access assistance, the National Welfare Rights Organization, led by Black mothers and their allies, sought to end discriminatory practices. During that period, an increased federal role in AFDC helped the program reach more families in poverty. Still, policymakers increased their attention on AFDC mothers’ work effort while participating in the program. Then, under a proliferation of waivers in the 1990s, states were allowed to bypass federal eligibility restrictions and began implementing more punitive policies.[6]

With the creation of TANF in 1996, the federal government eliminated federal minimum eligibility standards, granting states broad flexibility with respect to eligibility requirements and sanctions. States have taken advantage of this considerable freedom to implement policies that restrict access to the program, like full-family sanctions and time limits. These changes have led to a decline in the TPR nearly every year since TANF’s start.

The evidence is clear that when families have more income, children do better in the future. Income support programs can improve children’s academic, health, and economic outcomes, the National Academies of Sciences’ report on reducing childhood poverty finds.[8] Even relatively small amounts of income make a difference. Among families with incomes below $25,000, children whose families received a $3,000 annual income boost when the children were under age 6 earned 17 percent more as adults and worked 135 more hours per year after age 25 than otherwise-similar children whose families didn’t receive the income boost, research finds.[9] That research suggests that TANF policy changes that cut families’ income, such as establishing harsher sanctions or shorter time limits or significantly reducing benefits, could harm young children now and in the future.

TANF Should Do More to Help Families Meet Basic Needs

TANF is overdue for significant improvements. State and federal policy changes should focus on serving more families that need assistance, alleviating the program’s deep racial disparities, and ensuring that adequate resources are available to achieve these goals. For example, states should lift income thresholds and asset tests, remove barriers to access, and stop cutting off families that are still struggling. Additionally, federal policymakers should hold states accountable for serving families in need, require states to direct a specific share of TANF resources to families receiving cash assistance, and increase the block grant and index it to inflation.

Source: CBPP analysis of poverty data from the Current Population Survey and AFDC/TANF caseload data from Department of Health and Human Services and (since September 2006) caseload data collected by CBPP from state agencies

[2] To improve the reliability of the state-level poverty data, we created two-year averages of the poverty numbers; we also transformed the caseload data into two-year averages to calculate the TPRs. The years cited here are for the latter of the two years.

In earlier editions of this paper, CBPP used a different methodology to calculate these figures. These new estimates use the SPM and the latest available data from the Health and Human Services/Urban Institute TRIM.